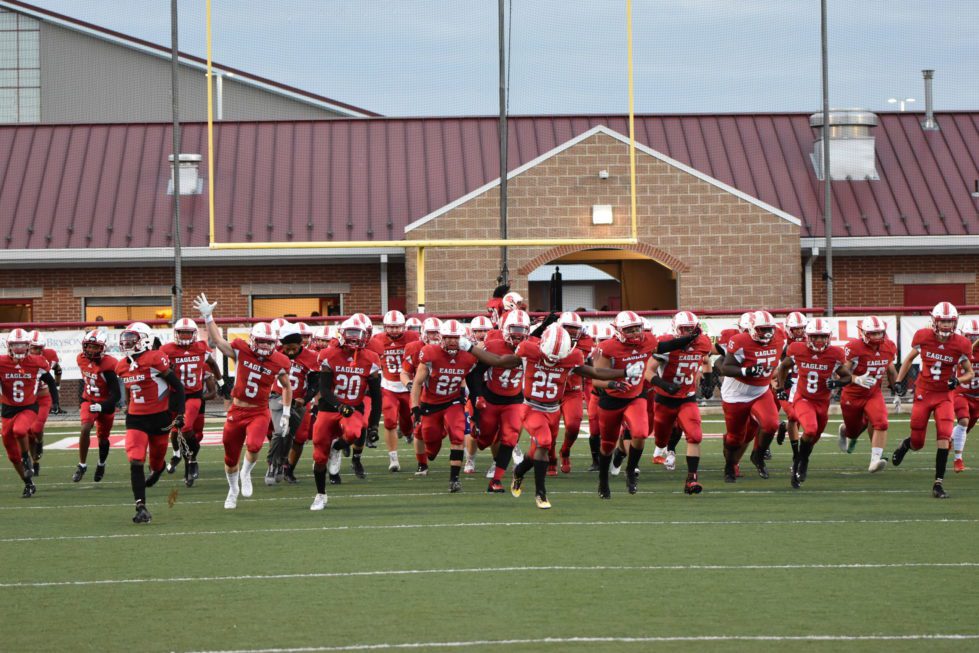 Georgetown – Cameron Edge threw two touchdown passes, including a 68 yard strike to Denim Smith just three minutes into the game, as Smyrna moved to 3-2 on the season with a 42-0 victory over Sussex Central on Friday, October 1 on the road at Sussex Central.

Edge completed 15 of 19 passes for 292 yards with two touchdowns and no interceptions. Edge has thrown for over 1,300 yards at the halfway point of the Eagles season.

“Cam is an unbelievable talent, he is a leader and a fine example of the type of player we want to represent our team, school and community. He has done a really good job for a player being in his first year in our system,” Smyrna Head Coach Mike Judy said.

The Eagles got the ball back midway through the first quarter when the Golden Knights went for it on fourth and two from their own 42 yard line, but the Smyrna defense held giving the Eagles great field position for their second offensive series.

Wayne Knight scored on a one yard run, the conversion attempt failed and Smyrna was out to a 12-0 lead with 5:56 to play in the first quarter.

Early in the second quarter Knight scored his second of three touchdowns with a two yard run. Edge connected with Devin DeMoe for the two point conversion giving Smyrna a 20-0 lead with 9:26 to play in the first half.

Smyrna would score again before halftime when Edge found Yamir Knight on short pass with Knight cutting thought the Golden Knights secondary for a nine yard touchdown pass. Wayne Knight run in the conversion as Smyrna led 28-0 midway through the second quarter.

The Smyrna defense began to develop a storyline of their own to match the output of their offense. The Eagles held Sussex Central to just one first down in the first half and only four for the game. They also held the Knights under 100 yards rushing for the game.

“Our defense really played inspired football and got agitated whenever Sussex Central had some success. It’s nice to see them play with a chip on their shoulder they shutout a very good football team here tonight,” Judy said.

Wayne Knight added another touchdown in the third quarter on a 12 yard run up the middle then ran in the conversion to give Smyrna a 36-0 lead and put the game under a running clock. Knight ended the night with 15 carries for 144 yards and three touchdowns.

“Wayne had another great night, it’s a great, great night when run and pass the ball against a stout and well coached Sussex Central defense,” said Judy.

Timothy Yancy added a one yard touchdown run to close out the scoring 42-0 on what would be the final play of the game.

Smyrna amassed 497 yards of total offense with 19 first downs in the game.

“I thought we played physical on both sides of the ball, these kids play hard and fix mistakes from previous weeks. I think we are trending in the right direction,” Judy said.

Smyrna (3-2) ranked #2 in Class AAA in the Delaware Live Sports rankings will travel to St. Georges next Saturday to take on the #3 ranked Hawks. Kickoff is at noon.

Sussex Central drops to 2-2 on the season will host the 3-2 Milford Buccaneers next Friday night at home with kickoff at 7:00pm. It will be Homecoming for the Golden Knights.