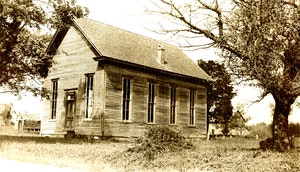 A 1920 photo of the Staytonville Church

Staytonville Methodist Church and Cemetery, located about six miles south of Milford, is in need of support, according to Milford historian Dave Kenton. Located in what is now just a crossroads where Staytonville Road, Memory Lane and Sun Street meet, the small church and cemetery have a rich history that could be lost to future generations without intervention.

“This cemetery was a project in 2006 for the Jonathan Caldwell Chapter of the DAR and several volunteers,” Kenton said. “A new historic marker will be installed at the site of the Methodist Church in the near future, but we are trying to create a Staytonville Cemetery Committee that would halp with the upkeep of the cemetery. I am donating the historic marker replacement sign made of fiberglass which should last about 50 years. What we need is help finding support for the cemetery mowing project which is about $1,000 each year for 12 weeks. There is a contractor who does a great job there now for $100 each week which we would like to continue, but we need a steady source of funding to continue providing the service.”

The 2006 project began when Janet Wilkins, a regent for the Jonathan Caldwell Chapter of the DAR and her daughter, Cathy Hutson, began searching for the grave of a revolutionary soldier who was buried in a forgotten cemetery, Kenton stated. Wilkins, a professional genealogist, spent hours both at the Delaware Public Archives and out in the field searching for family histories that can often be found on old tombstones. Wilkins came across the forgotten Staytonville cemetery and found it impossible to reach the tombstones for research as a jumble of wild cherry trees, vines and brambles had taken over what had been a beautiful country churchyard where around 70 people were laid to rest. Wilkins’ research revealed that there were 33 confirmed graves in the cemetery, but much information had been lost due to vandalism, decay and overgrowth. 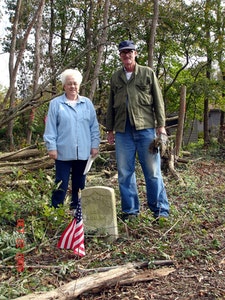 Janet Wilkins and Kent Slavin stand in the Staytonville Cemetery

Wilkins and Hutson searched the cemetery, discovering many monuments that had fallen over and been covered with 100 years of debris. In the southwest corner, they found a lost tombstone with inscribed with the name Nathaniel Hay, Esq. who died May 28, 1810, “aged 66 years 1 month and 27 days.” Wilkins researched Hays and discovered that he was a captain who served under Colonel Henry Neill of Lewes during the Revolutionary War. Col. Neill commanded the Second Delaware militia, a regiment that fought in the disastrous battle of Camden, South Carolina and was also on the scene at Dobb’s Ferry, New York when Benedict Arnold’s treason was discovered in 1780. They were also there on October 2, 1780, when Major John Andre was hanged as a spy. The regiment returned to Delaware with commendations from General George Washington. Hays later served as an elected member of the Delaware House of Representatives from 1785 to 1791. 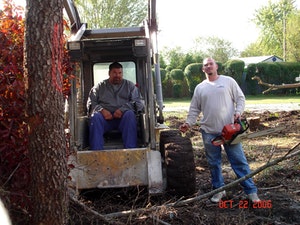 “We then began to research how someone as prestigious as Nathaniel Hays came to rest in this tiny church cemetery,” Kenton said. “It turns out that when Hays died in 1810, his widow, Rachel, received one-third of the 676 acres of land he owned at his death. Rachel was the daughter of Jacob Webb and many of his descendants are buried in the cemetery, which has been called the “Tea Town Cemetery” over time. Hays died without a will and court proceedings required a committee of “freeholders” to partition the land among the heirs. Plots filed in the Orphan’s Court in 1811 provide a glimpse into the community known as Tea Town as it was known before the state legislature renamed it Staytonville in 1851.”

According to Kenton, Hays and Rachel had four children, Purnel, Nancy, Elizabeth and Rachel. Hays’ daughter, Rachel, died in 1807, leaving a daughter, Sally, and a son, William Hays Stayton. The court gave Hays’ widow the mansion home and 105 acres of land at the south end of the Staytonville intersection. Purnel Hays was granted the 122 acres of land where he lived. Upon his death in 1844, Purnel was also buried in the cemetery. William Hays Stayton, Nathaniel’s grandson, received 20 acres near where the Staytonville intersection is today while Nancy, who had married Gabriel Deputy, received 172 acres along the northeast fork of the Nanticoke branch and 49 acres behind the church. Elizabeth, who was married to John Brown, received 120 acres along the Nanticoke branch. The families were all supporters of what was then called Lebanon Church. 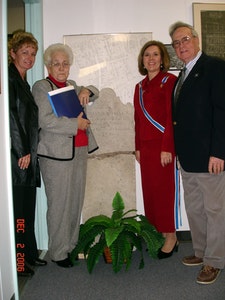 An early 1920 photo shows a prominent cedar tree growing at the rear of the church and projecting above the roofline. The church featured four “four-over-four” windows along both sides and two similar windows in the front. A single-gable roof with steep pitch and one small chimney for a small woodstove completed the standard country church. It was built on land first donated by John W. Stayton on May 26, 1840. The original trustees were Pemberton Clifton, Burton Prettyman, James B. Stayton, William H. Stayton and James Griffith.

“When Janet and Cathy discovered that Nathaniel was a Revolutionary war hero, they contacted Marvin Schelhouse who was concerned that a veteran was buried in a discarded cemetery with a broken tombstone,” Kenton said. “Janet, Cathy and Marvin made plans to begin an extensive cleanup of the cemetery plot with hopes of identifying and marking all the graves. Janet ordered a white marble veteran’s tombstone to replace the broken one which was donated to the Milford Museum. Under the direction of Janet and local archaeologist Kent Slavin and the assistance of a local masonry contractor, Randy Wilson, the cemetery was slowly reclaimed from nature. A few years ago, Barratt’s Chapel decided to take down their historic fence and we were able to obtain it for the Staytonville cemetery. The fence that surrounds the cemetery now was the original fence from Barratt’s Chapel.”