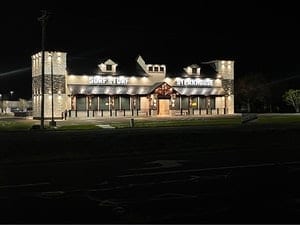 The long-anticipated Surf and Turf Steakhouse opened with a invitation-only soft opening on May 24 and 25, with the official opening to the public held on May 27. The initial opening offered a limited menu that was well-received by those who came out to celebrate the new restaurant. On June 8, they will begin serving their full menu.

“It was great, but anything but a ‘soft opening’ as the place was packed,” Barbara Chaffee-Straight said. “The food was awesome and everyone was really pleasant. We enjoyed talking to the manager, Andy, a very nice guy. So glad we got to be a part of it.”

Bobbie Bogan Kirkpatrick agreed with Chaffee-Straight, posting on Facebook that it was an “amazing experience,” also stating that the place looked “wonderful.”

Over three years ago, Steve Akoglu purchased the building that housed Bob Evans Restaurant in Milford with the goal of creating a high-end steakhouse at the location. Today, the restaurant looks nothing like the former chain with its white and gray brick façade, intimate interior and cozy bar area. Akoglu hoped to open the new location in April 2020 but was unable to do so due to the COVID-19 pandemic.

“All the furnishings have been here since April,” Akoglu said. “Even when we were able to open in June under the governor’s restrictions, it could only be at 25 percent and we didn’t want to open this type of restaurant with that limit. We thought we would be able to open in September, but with rumors we may have to shut down again, we waited.”

Although Akoglu offers steak and seafood at his Italian-themed restaurant, The Palace, he felt Milford needed a good steakhouse. After purchasing the building, he began researching steakhouses and found that the average restaurant of that type needed at seating for at least 140 as well as a full bar. Since Bob Evans only seated 118 and did not have a bar, extensive renovation was necessary.

The menu offers prime, hand-cut steaks, fresh seafood and pasta dishes, including seafood pasta. There is also a children’s and dessert menu. The full bar serves beer, a selection of fine wines as well as specialty cocktails. Prices range from around $8 up to $55. Although the restaurant is currently only open for dinner, they do plan to offer a lunch menu in the near future.

Surf and Turf is hiring for all positions and anyone interested can apply at the restaurant. They are located at 947 North Dupont Boulevard in Milford. Reservations can be made by calling 302-503-5555.