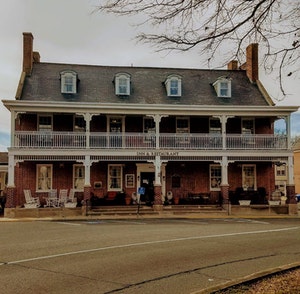 Recently, the owners of the Brick Hotel in Georgetown announced that they would be closing the doors in August as the State of Delaware had entered into a lease agreement with them for the building. This also meant that the owner of the Counting House, the restaurant owned by Bill Clifton, that was housed in the same building would also need to close.

“This has been a very difficult year for the hospitality industry,” Clifton said. “Although there were some small business grants and other funding options for restaurants, hotels, especially smaller ones like the Brick were not offered that assistance. The state came to them and made an offer they literally could not refuse. I can’t really blame them at all.”

Clifton opened the Counting House in 2018. Born and raised in Milford, the oldest of seven children, he spent nine years as the chef at Henlopen City Oyster House and helped create Dewey Beer Company. Clifton’s mother owns and operates Fortunata’s Bakery in Milford.

“It has really been difficult to get help,” Clifton said. “I think we may want to start looking at how we pay restaurant workers, look at the benefits they need and the hours they have to work. Big restaurants have been saying this for years and I think it is time we all started to listen. Over the past year, I have run this restaurant by myself, I stuck it out and reopened when we could. My staff was amazing throughout all of this and tried to keep as many of them as I could even at the height of the pandemic.”

One of the ways the owners of the Brick were able to make ends meet beyond renting rooms to guests was through special events like weddings, parties and other large group events. Because these have not been permitted for over a year, the hotel was hit very hard. Clifton himself says that he is not sure what he is going to do.

The Counting House is not the only restaurant in the area that is struggling to find staff. River Lights Café, EasySpeak and the Milford Diner are all advertising for help. Terri Rosetta, co-owner of the Milford Diner, announced that they would temporarily close as they could no longer provide the service they wanted as they did not have enough staff.

“I am good with front of the house staff and the staff we do have are incredible,” Rosetta said. “But we need staff in the kitchen who know how to cook. People leave the industry or get sick, and we have to have people who can step in when that happens. We get a lot of applications from school kids, but we need help when school is in session.”

Rosetta stated that the closure is only temporary, and they hope to be open soon. She and her partner, Brian Stabell, are taking the time to review what the diner offers and customers may return to new and improved offerings.

“I am going to take some time to get my head straight,” Clifton said when asked if he planned to reopen somewhere else. “We still have a lot of work to do at the Counting House to get everything emptied. It is bittersweet what is now going to happen in Georgetown. There is no longer going to be a destination on the Circle, just government buildings and I find that sad. Although we have said we plan to close the end of August, I am leaving it up to my staff. Right now, they can name their own price at any restaurant in the state. I only have three wait staff, so if two of them leave, I will have no choice but to close the doors, but I will not hold them back. I am not concerned about me, but I am very concerned about my staff.”