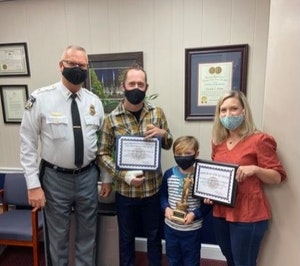 Senior Corporal Timothy “TJ” Webb was named as the 2020 Officer of the Year by Milford Police Chief Kenneth Brown. Webb began with Milford Police Department in 2007.

“TJ started with us as a patrolman,” Chief Brown said. “From 2012 to 2017, he partnered with Henk, a K9 officer. The two of them had many apprehensions and drug seizures. In 2018, he was promoted to Senior Corporal and assigned part time to the US Marshal Fugitive Task Force. I couldn’t even begin to list the apprehensions he has gotten while working on the task force, not only in the tri-state area but also for us here in Milford. Having an officer on the task force allows us to call in help when we need it and for a small department like ours, that is an incredible benefit.”

Sr/Cpl. Webb graduated from the police academy in 2004 and began his career with the Camden Police Department. He is a certified hostage negotiator and joined the special operations group.

On December 10, 2020, while serving a warrant in Rehoboth, Sr/Cpl. Webb was shot multiple times. He was transported to an area hospital where he underwent surgery and was then listed as critical but stable.

“He spent a week in the hospital and then spent two weeks in a rehabilitation facility,” Chief Brown said. “He is now recovering at home after undergoing additional surgery. What impressed me most was his attitude through all of this. His spirit was high, and it was infectious to all of us. There is no doubt that it played a big part in this recovery. For all these reasons, TJ Webb is our Officer of the Year.

Sr/Cpl. Webb thanked Chief Brown and members of City Council when he was presented with the award via Zoom. Mayor Archie Campbell thanked Sr/Cpl. Webb for his sacrifices to the safety of others.

“We are all behind you and we want you to know how happy we are that you are recoverin,” Mayor Campbell said. “This is a well-deserved award. You are an inspiration to so many out there and we are proud to have you in our police force.”

A plaque with a photo of Sr/Cpl. Webb will be placed in the lobby of the police department where it will remain for one year. After that, it will be given to Sr/Cpl. Webb to keep.