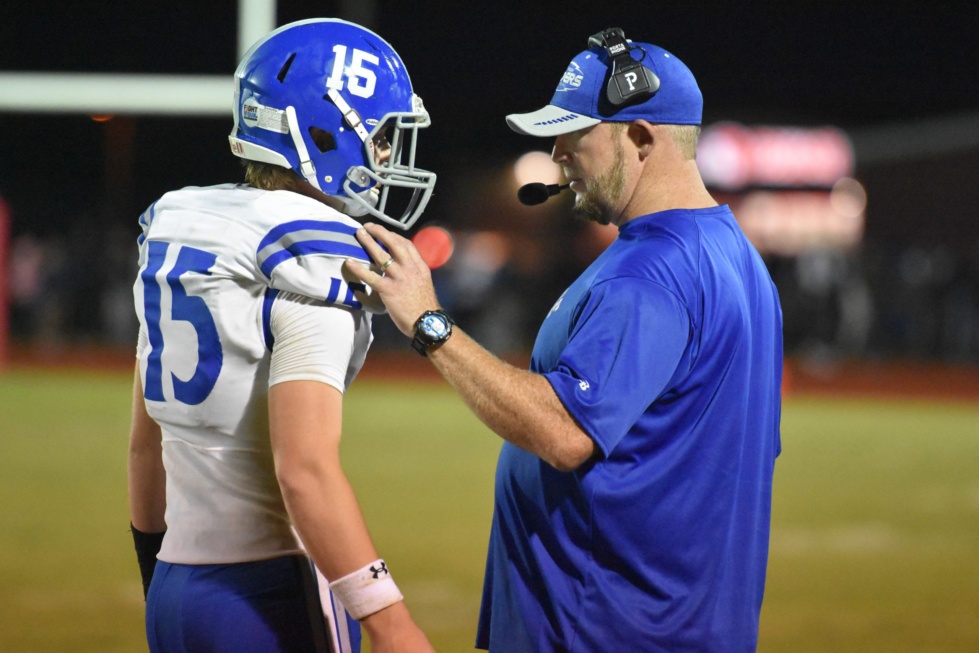 Greenwood – One of the marks of a good football team is when the offense is struggling they find other ways to score. The Woodbridge Blue Raiders did just that Friday night scoring in all facets of the game as they rolled to a 35-6 victory over the Red Lion Lions in a Class AAA District 3 game.

Less than two minutes into the game Woodbridge struck early with the defense as Red Lion punter Samuel Crossan mishandled the snap in his own endzone and Ben Carter was there for the recovery and a Woodbridge touchdown. Kenny Newton added the conversion run giving Woodbridge an 8-0 lead with 10:10 to play in the first quarter.

“It gave us some big momentum, I saw him drop the ball and everyone was going for the ball and luckily I was the one there and got it,” Carter said.

On their next drive Red Lion quarterback Mac Krauss engineered a six play 63 yard scoring drive capped off with a 23 yard pass to Seth McGroerty. The point after kick bounced off the left upright as Red Lion cut the lead to 8-6 midway through the first quarter.

Neither team would mount a scoring threat throughout the rest of the first half as Woodbridge took the 8-6 lead into halftime.

“We have played well all year in the second half, I thought we played well in the first half tonight except we just didn’t tackle well and made some mistakes to give them first downs and extend drives,” Woodbridge head coach Marvin Dooley said.

On the opening kickoff of the second half Jordan Evans initially bobbled the kick, but quickly picked it up found a seam in the middle of the field and then raced 90 yards breaking a couple of tackles along the way for a touchdown. Newton added the conversion run giving Woodbridge a 16-6 lead to start the second half.

“Me and Kenny had some miscommunication as to who was going to catch it, but it is what it is when I picked up the ball and looked up all I saw was green grass,” Evans said.

Evans would add another score late in the third quarter on a 16 yard run up the middle extending the Blue Raiders lead to 22-6.

“Jordan has been close to scoring all season and tonight he got in there a couple of times, we are priming for the playoffs so we are looking for guys other than Newton to help carry the load,” Dooley said.

Dooley would find other guys to help carry the load in the fourth quarter with Wyatt Wright scoring on a 6 yard run up the middle followed by Traci Johnson adding an exciting 47 yard touchdown run. Cotton Collins added the point after kick giving Woodbridge a 35-6 lead.

While somewhat overshadowed by the offense the Woodbridge defense had three interceptions in the game thwarting several Red Lion drives.

“All my guys fought hard and 9-0 feels great, but we just have to keep pushing keep working hard and finish this season,” Carter said.

Woodbridge is now 9-0 on the season and wraps up District 3 play 6-0, they will travel to Wilmington next Friday night to take on two time defending state champion Howard.

“Next week for us is a playoff game, we want to finish 10-0 and we want the first seed in the playoff and the first round bye that comes with it,” Dooley said.

The Lions will end their season travelling to Delcastle next Saturday for a noon kickoff.