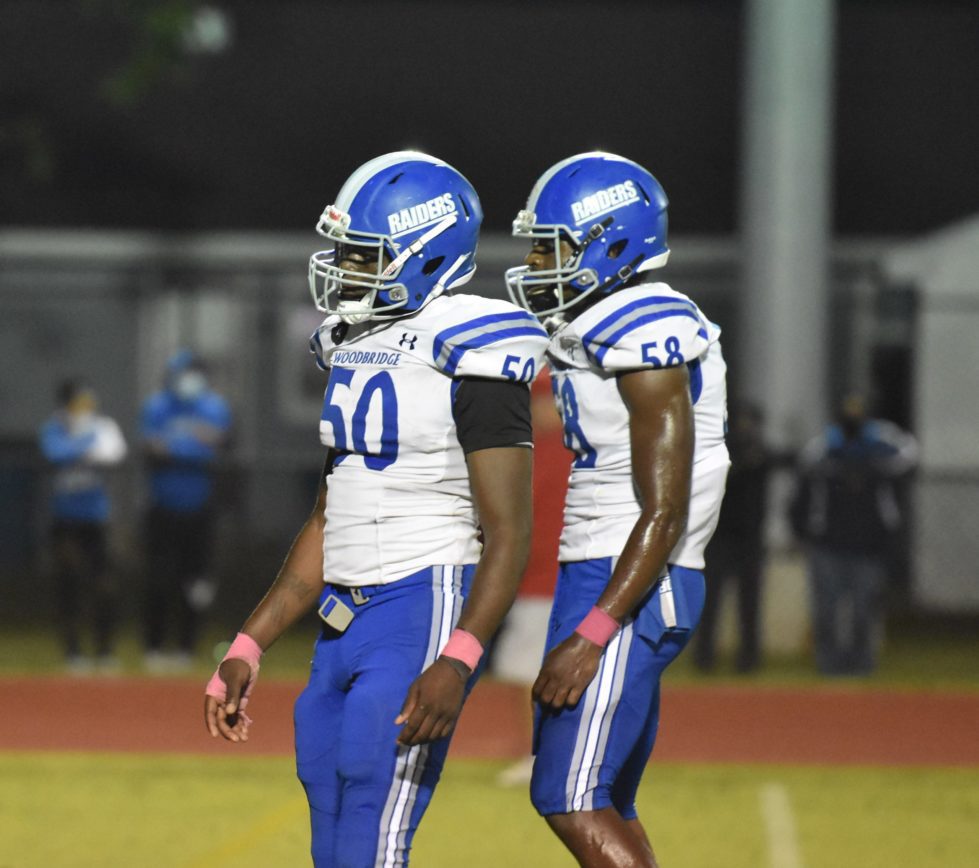 Greenwood – When two top ranked undefeated teams face off you can expect a defensive battle and that is what Caravel and Woodbridge gave the fans in the first half, but the two teams opened up and traded touchdown for an exciting second half.

In the end the Woodbridge Blue Raiders would remain undefeated with a 24-12 home victory over the Buccaneers in a Class AA District 3 game.

“All through the game we play as a team and we play all four quarters and we grind and grind and grind it out for the win,” said lineman Ellis Cannon. Cannon helped lead the Blue Raiders defense with six solo tackles and two sacks.

The two teams played a scoreless first quarter, Woodbridge would score on the first play of the second quarter when Ci-Atrick Stones returned a Caravel punt 63 yards for a touchdown. Kenny Newton added the two point conversion giving the Blue Raiders an 8-0 lead that would hold going into halftime.

“Ci-Atrick Stones is a good kick returner and that was a big play for us in this game. Caravel is a tough team and to have him return that for a touchdown at that point of the game was huge,” Woodbridge head coach Marvin Dooley said.

After a defensive battle in the first half both teams found the success in the passing game which led to more offense in the second half.

The Blue Raiders would answer quickly as Seth Smart connected with Lextyn Wescott on a 38 yard pass play for a touchdown. Jordan Evans would add the two point conversion run and Woodbridge extended their lead to 16-6 with 5:34 to play in the third quarter.

“I give the credit to my offensive coordinator Jason Roabke, he came up with some extra packages for tonight like putting Jordan Evans in the wildcat which opened things up for us. It was a game changer,” Dooley said.

On the first play of the fourth quarter Caravel quarterback would answer with a touchdown pass of his own as Nick Richardson hooked up with James Wingo for a 52 yard touchdown. The extra point kick hit the left upright. Caravel would trim the Woodbridge lead to 16-12.

Late in the fourth quarter Newton would put the game out of reach with a 72 yard touchdown run down the right sideline. Newton then added the conversion run and Woodbridge led 24-12 with 4:38 remaining to play.

Newton carried the ball 8 times for 103 yards and a touchdown. He had two fumbles in the first half, but Dooley said he was impressed with how Newton came back later in the game to score.

“We pulled Kenny aside and we told him we’re going to get on you, but we’re not giving up on you. You’re going to get the get another chance, but have to hold onto the ball,” Dooley said.

Drumgo finished the game with 77 yards on 23 carries while Richardson completed six of 20 passes for 83 yards for Caravel.

Caravel suffered their first loss of the season and fell to 5-1 overall and 2-1 in Class AA District 3 play.

“We will get back to work on Monday and prepare for a very good Lake Forest team,” Reed said.