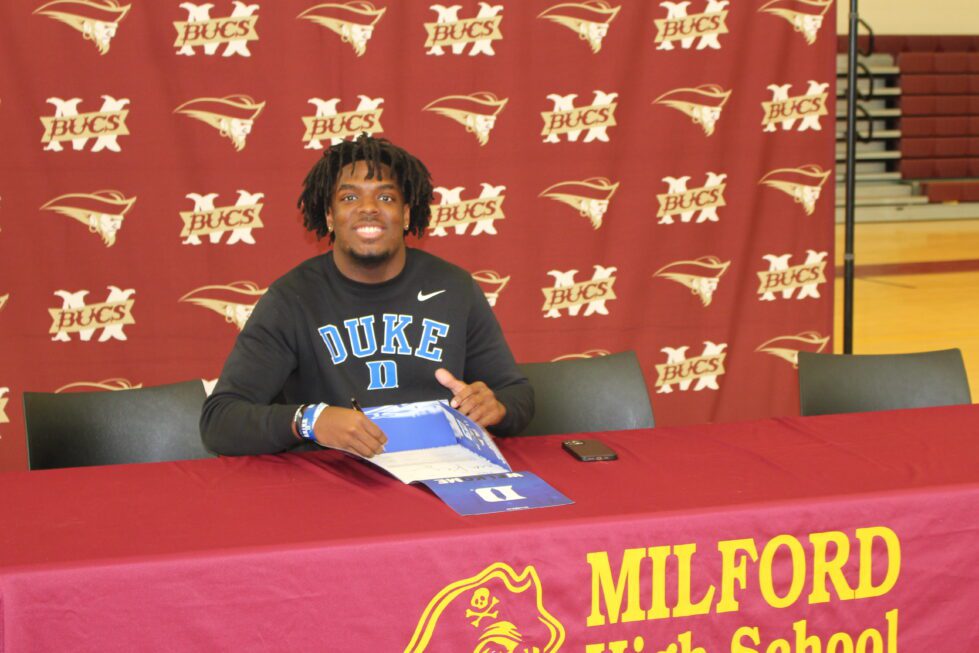 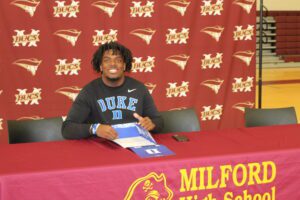 Desmond Aladuge is all smiles after signing with Duke University

Milford football standout Desmond Aladuge had upwards of 30 Division I school vying for his signature, including Ivy League bluebloods Harvard and Princeton, and the three U.S. service academies in West Point, the Air Force Academy and the Naval Academy being among the suitors.

And Aladuge, who committed to the Blue Devils in June, remembers the day and moment he decided being a Blue Devil was his future.

“My family and I went on my official visit when Duke played North Carolina (a heartbreaking 38-35 last-second loss to the archrival Tar Heels in October),” he said. “I knew then that’s where I wanted to be. It’s really the balance in the education and the football.

“When you go to Duke, you’re going to an Ivy League-level school where you’re going to get a great education. And when it comes to football, Coach Elko and his staff came in and in one year created a great change and a winning culture there; and I know it’s something I want to be a part of.”

In his first season, Elko led the Blue Devils to an 8-4 record and will be playing in the Military Bowl Dec. 28 (Wednesday) against the University of Central Florida in Annapolis, MD.

Aladuge, who will be an early enrollee in January and is the first Buccaneer to sign during the early signing period, had a stellar four-year career for the Buccaneer as a three-way standout as a defensive end, offensive tackle and punter.

In his senior campaign, which saw him ranked the No. 1 prospect in Delaware by ESPN.com and the 113th-best edge rusher in the country, Aladuge recorded 116 tackles, 59 of those for loss, 31 sacks, 69 quarterback pressures, 5 forced fumbles and 9 fumble recoveries. Those stats earned him first-team All-District and All-State honors at defensive end and offensive tackle, which also included a unanimous selection as the lineman of the year.

In addition, he is on the list for the Gatorade Player of the Year and Mini Maxwell Award which will be announced in January and February, respectively.

Aladuge was a four-time Academic All-State performer with a 4.6 grade point average his senior year, with Buccaneer head coach Shaun Strickland calling him “the complete package both academically and athletically.”

“This is a tremendous achievement for Des,” Strickland said. “He is the model of a student-athlete. He did everything the right way. He had great grades, trained year-around on the field and in the weight room, played multiple sports and led by example.

“He is one of the finest young men I have ever coached, and he makes me proud as a coach; and as a parent, I hope my daughters bring home a young man like Desmond. Thank you, Des, and thank you to your mom and dad (Lulu-Lynn and Kola) for raising such a great young man.”

Aladuge’s mom Lulu-Lynn is proud of her son for many reasons, but especially how he has adjusted over the years particularly the COVID ones.

“Those COVID years were very tough,” she said. “He adjusted by working out, focusing on his health—getting better, getting faster, getting stronger, being organized with this new way of going to school, being at home—helped him think a lot about what he wanted to do; so, I’m proud of how he made the adjustment. I’m proud that he took the time to make the decision about what schools he wanted to go to because he had over 30 offers.”

Aladuge’s new position coach at Duke, Harland Bower, said he was excited about having the youngster join the DU ranks during the Blue Devils’ signing press conference on Wednesday.

Bower said there was one thing that stood out from a footballing standpoint when Aladuge went to Durham for a summer camp.

“Length … extreme length, and out of the signees today, he’s got the longest arm length. He’s 34-3/4 inches long and it’s unbelievable. He’s got a great, great upside. He was an offensive tackle and D-end (at Milford). We’re really, really excited about where he’s going to go,” Bower said.

Now that he is Durham-bound in a couple of weeks, Aladuge says he is really excited about playing for the Blue Devils, and especially for Bower.

“I love his style of coaching. He’s a very aggressive coach, he’s going to get on you, but he wants you to get better. When it comes to his football IQ, he knows a lot about the defensive end position,” Aladuge said.