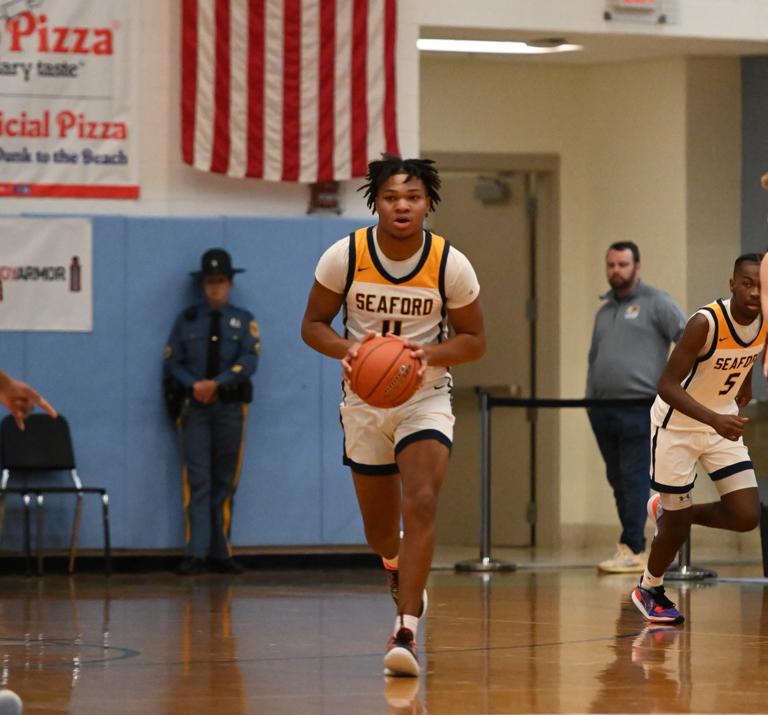 The third ranked Seaford Blue Jays and tenth ranked Laurel Bulldogs played a very important boys basketball game that resembled a “track meet” as the teams raced up and down the floor for 32 minutes in front of a “sold out” crowd in Bill Pugh Gymnasium Thursday night.

The Blue Jays held a 14-7 1st quarter lead but Laurel out scored Seaford 18-14 in the 2nd quarter as the two Henlopen-South rivals went into the locker room at the half with Seaford in front 28-25. The game would remain tight for the final 16 minutes with several ties and lead changes. Laurel took its first lead at 29-28 early in the third quarter when Kylse Wilson made a three pointer. The Bulldogs extended their advantage on a Dontarius Jones bucket to go up 33-30 and the boisterous crowd “rocked the building”.

It was one big play after another by both teams the remainder of the half, setting up the final 2:30. Jones tied the game at 58-all with a floater in the lane. Barely thirty seconds later Avion Matthews fought through 2 defenders for a crucial basket and was fouled. His free throw gave Seaford the lead at 61-58. Everyone came to their feet when Joel Parker connected on a left corner shot to tie the game at 61 with 1:39 to go. Following a missed shot, Wilson gathered a loose ball and called a timeout while surrounded on the floor. The Bulldogs missed an opportunity to grab the lead when Avyion Matthews stole a pass and went the length of the court for a “layup and one” with :38 left. He converted the free throw for the traditional 3-point play and the Jays had a 64-61 lead.

Again, Laurel failed to score on the next possession and Kashmier Wise was fouled. He drained both foul shots and it was a 5-point advantage for Seaford at 66-61. Seconds later, Laurel’s Jones made a tough shot in the paint and was fouled with under :06 left. He intentionally missed the free throw, hoping Laurel could get the rebound and have a chance to get off another shot. However, his attempt to hit the rim, only grazed the net. Seaford got the ball back and the Bulldogs had to foul and hope Wise would miss his two attempts at the line….he made both to make the final score 68-63 Seaford.

Blue Jays head coach Vince Evans told Delaware Live-302 Sports, “we knew Laurel would play with a lot of emotion and inspiration, so we had to stay patient and calm”. Coach was referring to the tragic loss of pro wrestler and community icon Jamin Pugh, known by his fans as Jay Briscoe. He was remembered during pregame with a moment of silence after his untimely death at the age of 38 in a recent auto accident. Both teams gathered at mid court prior to the public address announcement and the moment of silence. The loss of Pugh is felt by both communities as the two towns are barely 6 miles apart.

Avyion Matthews led the Blue Jays with 25 points, while Kas’ Wise added 17 and Careen Bolden chipped in with 11. Seaford improves to 11-1 and 8-0 in the Henlopen South. Their only loss came against #1 Middletown.

Jones scored 24 points for Laurel, and his teammate Corey Mumford added 11. The Bulldogs lost to an “in-state” opponent for the first time this season and fell to 8-3, 6-1 in the “South”.

These two will meet again in the final regular season game, February 21 at Seaford.