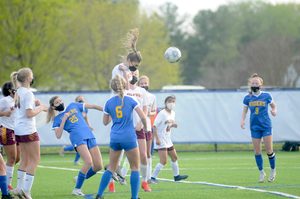 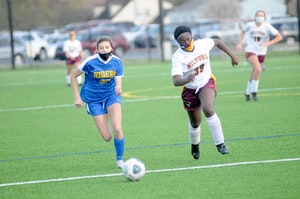 Lila Mergner put the ball in the back of the net unassisted in the 69th minute last Thursday afternoon.

Unfortunately, the goal by the Milford High sophomore was the lone score for the Buccaneers’ soccer team that afternoon as Henlopen North foe Caesar Rodney High had already pulled ahead on their way to an 8-1 victory in Camden April 15.

Senior Jada McCullough scored a hat trick and added an assist for the Riders (3-2) in the win, while sophomore Allyson Durham added two goals and one assist and junior Gabrielle Davis scored one goal with three assists.

For the Bucs, junior goalkeeper Shana Smith collected seven saves on 18 shots, according to the box score. Caesar Rodney put up six first half goals, but Milford’s defense was able to limit the Riders to just two scores in the second half.

Prior to the CR loss, the Bucs had won four of their first six games of the season, including shutout wins over McKean High, Sussex Central High and Woodbridge High.

Head coach Prince Kemmerlin opened his tenure at the helm of the girls’ soccer program with a season-opening 12-0 win over McKean at home March 22 and followed it up with a 5-1 victory over Delmarva Christian High just two days later to start the season 2-0.

After consecutive losses to Smyrna High (7-0) on March 26 and Lake Forest High (2-1) on March 30, the Bucs rattled off consecutive shutouts of Sussex Central (4-0) on April 1 and Woodbridge High (10-0) on April 13 heading into the CR showdown. 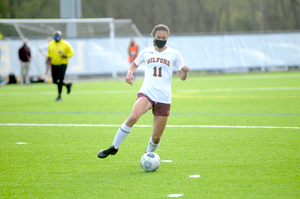 Led by a senior group made up of Abbegail Allen, Allison Benton, Emma Sekscinski, Miranda Walker and Rebecca Wisniewski, Milford has outscored opponents 33-18 to put up a 4-3 record through those seven games this season.

The squad has a busy week ahead with three home matches over the next eight days against Polytech High April 22, Dover High April 24 and Laurel High April 27.