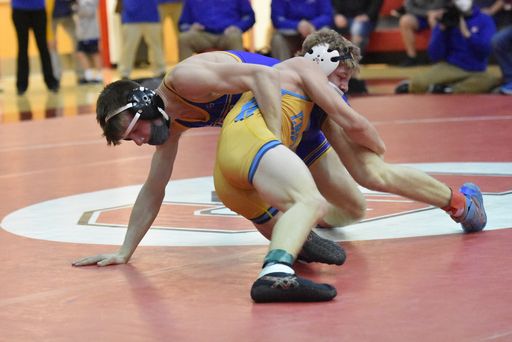 Smyrna – Saturday’s matches at the DIAA Dual Meet State Championships didn’t exactly follow the blueprint for Cape Henlopen head coach Chris Mattioni, but the Vikings were able to find pins in other weight classes to bring home the Division I state championship.

“When you have a guy winning a match and then get pinned others have to step up and get a bonus point here and a bonus point there to make it up, that’s what is great about the dual meet format,” Mattioni said.

Wright started the match with a pin for the Vikings, but the Riders M’Ja Smith answered with a 17-5 major decision at 132 pounds. Cameron Cataldi then won a technical fall at 138 pounds as Caesar Rodney took a 9-6 lead.

Cape Henlopen took the next five bouts. Andrew Schaen won a major decision at 145 pounds and Mikey Frederick won a technical fall at 152 pounds. Fritchman recorded his pin at 160 pounds, Carson Kammerer won with a technical fall at 170 pounds and Alex Taylor finished the run with a pin at 182 extending the Vikings lead to 31-9.

Shamar Nelson got the Riders back in the win column with a pin at 195 pounds. At 220 pounds Josh Dyer scored an upset over top ranked Dalton Deevey with a 7-5 decision to cut the Cape Henlopen lead to 31-18.

Ruppert’s pin put the match out of reach for Cape Henlopen as they took a 37-18 lead.

Alex McEvoy won a technical fall for Caesar Rodney at 106 pounds and Cole Moffett won a 6-4 decision over Max Meadows at 113. Baker ended the match with a pin at 120 pounds.

“It feels amazing, it really does,” Mattioni said.

M’Ja Smith of Caesar Rodney locks up a cradle on Josh Alveres of Cape Henlopen at 132 pounds. Photo by Ben Fulton

Josh Dyer of Caesar Rodney looks to go behind on a takedown against Dalton Deevey of Cape Henlopen at 220 pounds. Photo by Ben Fulton