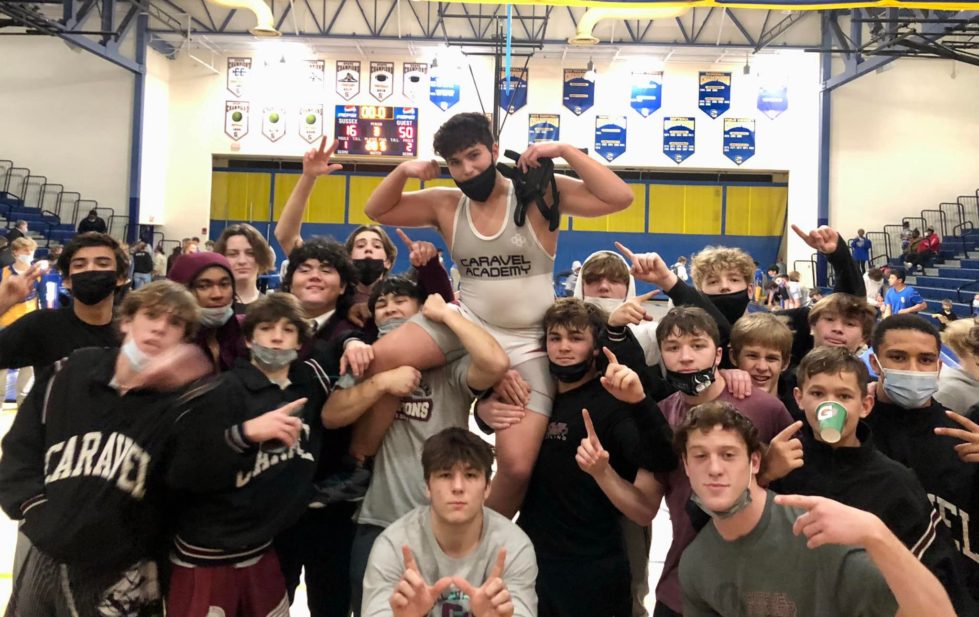 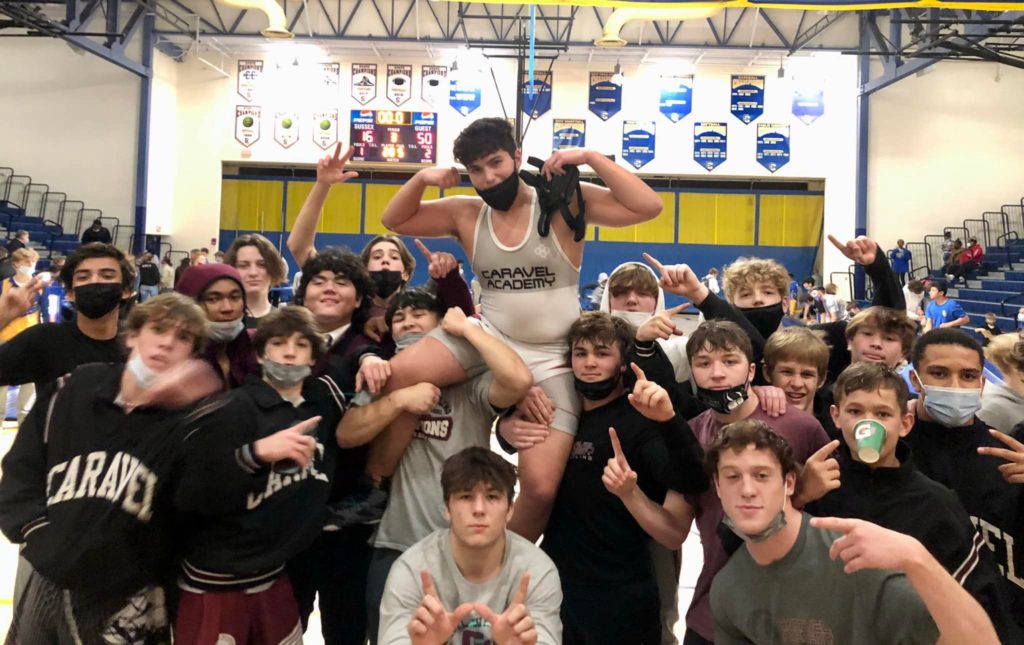 Georgetown – The defending Division II state champions Caravel Academy went on the road to Sussex Central on Wednesday night to start their dual meet season and on the strength of winning 11 of the 14 bouts won the dual meet 50-16.

The match began at 106 pounds where the state’s top ranked wrestler in that weight Malachi Stratton scored a 15-0 technical fall to put the Golden Knights up 5-0, but that would be the last bout they would win for a while.

The Bucs reeled off 10 straight wins, which included three pins as Caravel began to stretch their lead.

“When you see your teammates winning, it generates excitement to keep the wins coming,” Caravel head coach Mike Welch said.

Defending state champion Eddie Radecki won a 7-0 decision at 113 pounds to close the score to 5-3, that would lead to the night’s most exciting bout.

Sussex Central’s #5 ranked Evan Cordrey and the Bucs #6 ranked Marcello Ioannoni met at 120 pounds. Cordrey scored the first takedown, but Ioannoni came back with an escape and takedown of his own to take a 3-2 lead. Ioannoni took a 4-2 lead with an escape at the end of the second period, but Cordrey answered in the third period with a reversal to tie the match.

In sudden victory Ioannoni scored a takedown on a scramble to earn a 6-4 victory and giving Caravel Academy a 6-5 lead in the match.

“The team always seems to come up big during dual meets because they know they are not just wrestling for themselves, that extra incentive is especially effective in these close matches because the energy comes from the bench,” Welch said.

Caravel’s Luke Poore recorded a pin at 126 pounds followed by back to back technical falls by Dylan Knight (132) and Michael Kling (138). Jordan Miller gave extended the Bucs lead in the dual to 25-4 with an 8-4 decision at 145 pounds.

John Antonio kept Caravel’s string of wins going with a 12-3 major decision at 152 pounds before the Bucs reeled off three straight pins. Alex Poore recorded a pin in 1:37 at 152 pounds, Nick Hall at 160 pounds recorded a 38 second pin and Matt Duarte got his fall in 3:33 at 182 pounds as Caravel sealed the match leading 47-4 with three bouts left in the match.

In the ten bout streak, the Bucs amassed 17 bonus points to help pull away in the meet.

“Before the dual we go over where we are on paper against an opponent then explain where we think we can score bonus points, that will be the deciding factor. With that mindset each wrestler is motivated to maximize their team points,” Welch said.

Sussex Central’s Josh Negron stopped the Caravel run with a pin in 1:06 at 195 pounds followed by Gabe Cannon’s pin at 220 pounds in 4:41. The Bucs Alex Diluzio ended the match with a 2-1 decision at 285 pounds.

Both teams will compete in the Beast of the East Tournament at the University of Delaware on Saturday and Sunday. Caravel will host Cape Henlopen on Wednesday, December 22. The match will be livestreamed on Delaware Live Sports.