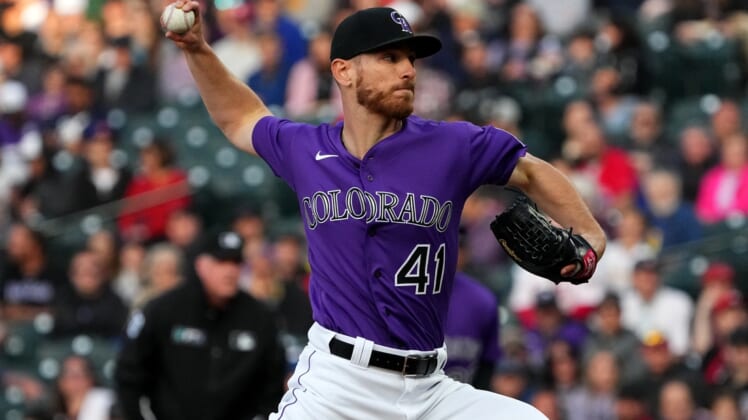 Chad Kulh of the Colorado Rockies, photo courtesy of Sportsnaut

Chad Kuhl spent the first five years of his Major League Baseball career in Pittsburgh where he was a serviceable starter for most of his tenure, before spending time in the bullpen last year.  When his contract was up at the end of the 2021 season, he jumped on an opportunity to sign with the Colorado Rockies, 1 year, 3 million dollars, an opportunity to be a full-time starter again.

While it’s only mid-June, and there is a lot of season to go, Kuhl has had a bit of a resurgence year in Colorado through 12 starts.  Much to the enjoyment of my fantasy baseball team, the former Blue Hen totes a 4-4 record with a career low 3.69 earned run average in 63.1 innings pitched.  He’s been the most efficient with his command in 2022 since his rookie year, averaging 16.75 pitches per inning.  This is partly due to Kuhl pitching more to contact this season.  Both his walk rate & strikeout rate are down this season & that adjustment seems to be working for the 29-year-old.

Perhaps his two most impressive starts this season came against two of the hottest teams in baseball right now.  On 4/18 Kuhl dominated the Phillies, scattering only two hits over six innings to earn his first win of the season.  Then earlier this month, Kuhl shut down the red-hot Atlanta Braves to the tune of 5 hits, 0 runs, over 6 innings.  However, the Rockies offense had no answer for Max Fried & the Braves would win 3-1 in the 10th inning, to continue their win streak that would extend to 14 games eventually.

Kuhl has struggled to tally innings & starts through his career, whether that be to injury, or other instances.  He has only pitched over 100 innings once in his career, 157.1 in 2017.  Tommy John took the second half of his 2018 and his total 2019 season away, but 2022 is shaping up to be a potential bounce back from that.

The Middletown graduate’s next start is scheduled to be the Miami Marlins on 6/22, and if this start reflects his other strong performances against NL East opponents expect a gem from Kuhl.