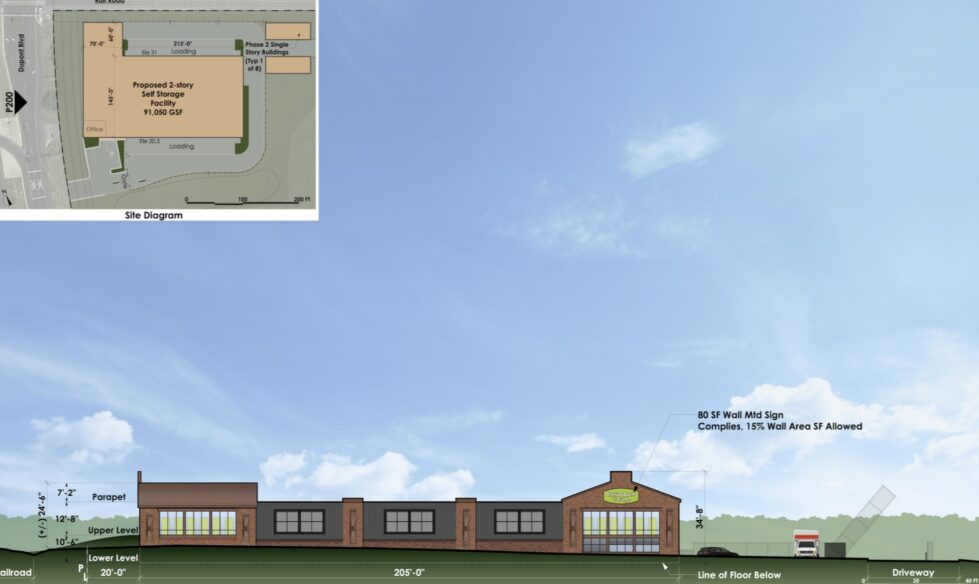 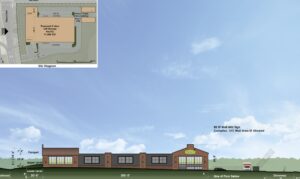 Milford City Council recently approved a conditional use for a self-storage business, operated by First State Self Storage, on South Dupont Boulevard. The conditional use included changes from an initial plan whose approval had expired. The changes made required the owner to return to council for additional approvals. City Planner Rob Pierce explained that the Board of Adjustments approved an adjustment for encroachment into a wetland buffer in order to allow for a steep slope on the southern end of the site and to allow the owners to install a stormwater outfall.

“The Planning Commission did review this application and voted to approve the application with a vote of six to zero,” Pierce explained. “They added conditions that the site have a continuous secure security border around the improvements and that the applicant would provide directional lighting to limit any lighting of adjacent properties. Another condition was that the applicant maintain the visual screening indicated on the plans for the property to the east which is the only abutting residential property.”

Councilman Dan Marabello pointed out that the plans included use as a medical facility to which Pierce state that wording was a carryover from the previous application and could be removed. He suggested removing the language in the motion. Councilman Jason James asked what changes were made that warranted the new approvals.

“In the original plans, there was a 1,200 square foot manager’s office or residence and there is no longer a manager’s residence,” David Hutt, an attorney with Morris James, said. “It became apparent that the site had some challenges and there used to be a building that was partially located in this area. So, the owner and the developer went back to the drawing board to see how else the site might be able to be configured. After careful thought and consideration, an attractive alternate plan was designed and that is the application we have in front of you this evening.”

The new plan included approximately 90,000 square feet with eight single story buildings in the rear. The larger building in the front of the property which would be visible from Dupont Highway would be a single story self-storage unit. In 2020, council approved five buildings, but the new proposal included nine buildings although the actual footprint of the buildings was smaller. The rear building would actually be two-stories but because it would be built into a slope, both levels of the building would essentially be ground floor. They would also be climate-controlled storage, which, according to Hutt, was becoming a growing need in the area. Because the buildings were built into a slope, they would not look as if they were two story buildings.

“The tentative hours of operation when there’s going to be someone on site to assist customers who want to lease a unit or close out a unit is Monday through Friday from nine to five and on Saturday from nine to one,” Hutt said. “Of course, access to this facility would be 24/7. If you have a key code and you actually own a unit within it, no matter what hours of operation, hours you work, you could access your things that are stored there.”

Kenneth Usab, an engineer with Morris and Richie Associates, explained that they had made a few other minor changes, including combining two buildings to create open space and adding a pond amenity. There were also plans to secure a fence boundary around the entire property and a dumpster that was originally planned for the rear of the property was moved closer to the front and away from the residential property. The fence will also prevent headlights from impacting the residence as well.

“These are short trees,” Councilman Marabello said. “There’s no adverse effects on the other side there? The few houses that you have on the east side, do you have high shrubbery so that the backdrop for those houses is screened off better than six feet? I hear you have a pond in there or something. One of the things, I’m concerned about and I think some of my fellow council people were thinking now and in the future, more beautification. Not necessarily a lot of money, but if you look across the street, they put in a lot of money to beautify it, even though it is just a storage unit. Are you going to add some shrubbery by the pond, so it looks nice when you approach it?”

Hutt explained that the Planning Commission had addressed some of those concerns adding conditions that included visual screening for the property. There are plans for shrubbery and small trees on the property. The other condition was that the landscaping shown on the plan be maintained through the final site plan and approval process. Mayor Archie Campbell asked if there would be storage of outside trailers and RVs on the property. Hutt stated that there was no plan for that type of storage and that all storage would be inside the buildings.

“I did my own survey of the area for climate controlled storage available in the Milford area in June,” Greg Cirino, part of the Acquisitions and Development team for Morris Ritchie, said. “I just got a call last week that a 10×20 unit was available. So, that’s about a six month wait for one unit that is climate controlled. So, we put an emphasis on climate controlled here. There are also going to be ADA compliant drive up units. The two types of storage have different demographics. Women are the primary users of climate controlled storage. They want something that is safe, clean and where they feel secure. Men primarily use the drive up, non-climate controlled units, such as contractors and such.”

No one spoke at the public comment portion of the meeting. However, Rob Pierce read an email into the record from Tom Passwaters who lived in the residence adjacent to the property.

“We have concerns with the new application and whether the applicant still agrees with the previous application that was approved in 2020,” Passwaters wrote. “And those conditions where the site shall include unobtrusive lighting, security fencing shall be provided around the entire perimeter. Customer service security gate access hours are limited to 6:30 Am to 9:00 PM and buildings are limited to one story. A 15-foot landscape buffer shall be maintained between the subject parcel and the residential parcel to the east.”

Mayor Campbell clarified that anyone who was going to access the gate will have a key or code so that they can get to their unit at any time. Hutt confirmed that access would be 24/7 as that was typical for a self-storage unit. The Planning Commission did not place conditions on the hours anyone who rented a unit could access the property. Council approved the request unanimously.

“It’s a very attractive building,” Councilman Todd Culotta said. “Self-storage units sometimes get a bad rap, but this one looks like a higher end one and it adds to our business community. I think it’s a nice trade off. It is a in the commercial corridor on the highway and it is what should be there. The residences that are close by should be minimally impacted even at a 24 hour access.”

Councilwoman Katrina Wilson stated that this was something that has been needed for a long time and was something people didn’t talk about until they needed additional storage space.