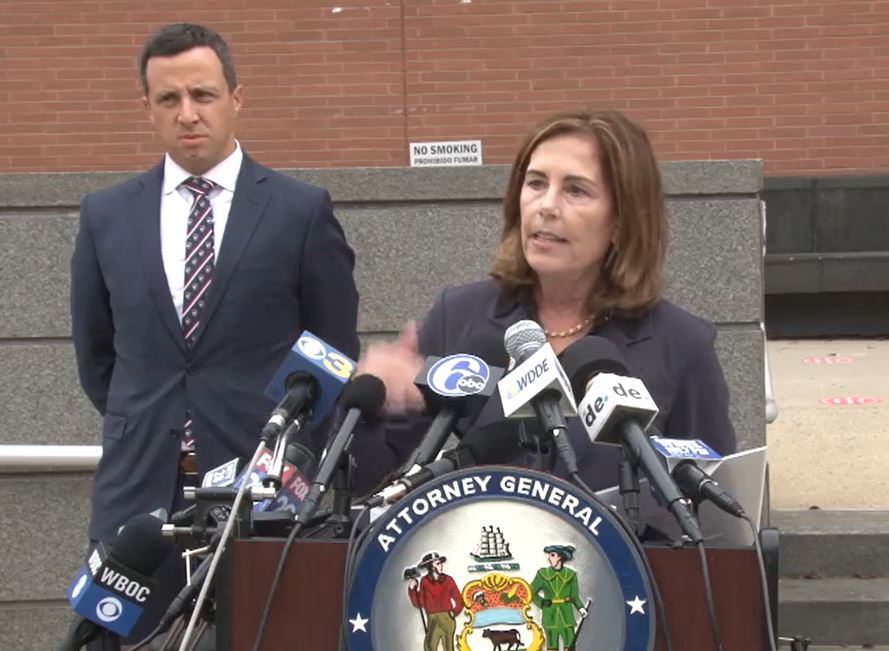 Delaware Auditor Kathleen K. McGuiness has been indicted on five counts stemming from fraud and abuse in the management of her office, state Attorney General Kathleen Jennings announced Monday afternoon.

Among the charges leveled at McGuiness is that she fired workers in her office to hire her own daughter, who she allowed to use a state car and whom she kept paying while the daughter was in college in South Carolina and not working for the state, Jennings said.

McGuiness also attempted to track the emails of employees she perceived as possible whistleblowers and arranged contracts so the contracts would not meet the threshold that required state oversight and neither would the payment of them.

“If anyone should know better, it’s the state auditor,” Jennings said. “Our investigation has shown Kathleen McGuiness carried out the very misbehavior that she was elected to stop.”

The five things McGuiness was indicted for specifically are conflict of interest in violation of the state of Delaware law, felony theft, non-compliance with procurement law by structuring state payments, official misconduct and felony witness intimidation.

The theft and witness intimidation charges are felonies. The others are misdemeanors. If convicted, McGuiness could face 13 years in jail.

The next step, Jennings said, is that McGuiness would turn herself in and be arraigned.

Jennings said that the investigation by the Division of Civil Rights and Public Trust had been going on for a year and involved about 13 whistleblowers from McGuiness’s office, whom Jennings praised as brave for risking professional peril.

The investigation will continue, Jennings said. She urged anyone with knowledge of any of the issues to contact the Department of Justice at (302) 577-5400 or de.gov/publictrust.

“The investigation has confirmed a clear and disturbing pattern of behavior that was not only unethical but it was against the law,” she said. “We uncovered corruption, nepotism, fraud and misconduct that implicated 1000s of taxpayer dollars.”

McGuiness’s daughter is not under indictment, Jennings said.

The attorney general said that McGuiness that as the pandemic was causing job losses around the state, McGuiness told one worker that she didn’t have enough available hours for her and fired her. Two others left for the same reason.

All three were what the state terms a “casual-seasonal employee” hired on a temporary basis and typically working a maximum of 30 hours per week. Those three worked from 2.28 hours a week to about 8 hours a week once the pandemic started, according to the indictment.

McGuiness then hired her daughter and her daughter’s friend, who was eventually paid $8,000, without posting the jobs, having interviews or letting someone without a conflict of interest supervise the project.

McGuiness also directly supervised her daughter, who was listed as a public relations officer and then an intern, Jennings and the indictment said.

The daughter was permitted to work up to 37.5 hours a week and the friend up to 29.5 hours per week.

While the daughter was in college and not working for the state, the daughter’s check was deposited in an account owned by both McGuiness and her daughter, Jennings said.

The contract involved a company called My Campaign Group, which had been McGuiness’s political consultant company when she ran for lieutenant governor in 2016. She hired them to provide communication services, according to Mark Denny, head of the Division of Civil Rights and Public Trust.

Jennings said that McGuiness told the company there was a loophole that would allow her to hire them by paying them $100 less than the $50,000 threshold that triggers state scrutiny and avoid a competitive bid process, Jennings said.

“Let me stress that point,” Jennings said. “The bidding process exists to protect taxpayers. It’s there to prevent this exact behavior. One month later, the defendant entered into this contract with My Campaign Group, which was never submitted for public bidding whatsoever.”

“Once again, she suggested structuring the contract payments to avoid public oversight,” Jennings said. “It’s important to keep this in mind, there this was done by the state auditor whose job is, literally, to protect your tax dollars from this very kind of spending.”

Jennings paid all four contracts with My Campaign Group with checks of less than $5,000, which also prevented the deals from triggering state accounting scrutiny.

McGuiness also told an auditor’s office employee to use his state purchasing card to send $1,950 to My Campaign Group through its PayPal account.

The founder of My Campaign Group founded another company, Innovate Consulting, which won a contract for “subject matter expert and analyst for various topics,” “communication of reports on topics including, but not limited to, education and healthcare,” and “writing and editing for initiatives.” Innovate Consulting was paid $77,500 between Nov. 4, 2o20, and Feb. 12, 2021.

The attorney general said that McGuiness submitted more than three dozen requests to monitor employee emails, including at least one former employee at a completely separate agency.

“The auditor, whose job is to be a government watchdog, engaged in an extensive pattern of surveillance and intimidation against those whistleblowers,” Jennings said.

The indictment said McGuiness took, exercised control or obtained state property worth $1,500, but doesn’t say what that property was.

The indictment also said that McGuiness submitted several dozen e-record requests to the Delaware Department of Information and Technology for the contents of employee email requests.

That allowed her to “surveil the communications of potential whistleblowers and witnesses against her,” the indictment said.

The indictment also says McGuiness discriminated against employees who questioned her conduct and enacted office policies to limit the personal activities of employees who associated with former employees.

Jennings said Gov. John Carney’s office was aware of the indictments, but she wasn’t at liberty to detail the reaction.

She also said she had been too focused on the case to deal with the aftermath, but that the General Assembly would be the body to make a call about impeachment and other actions.