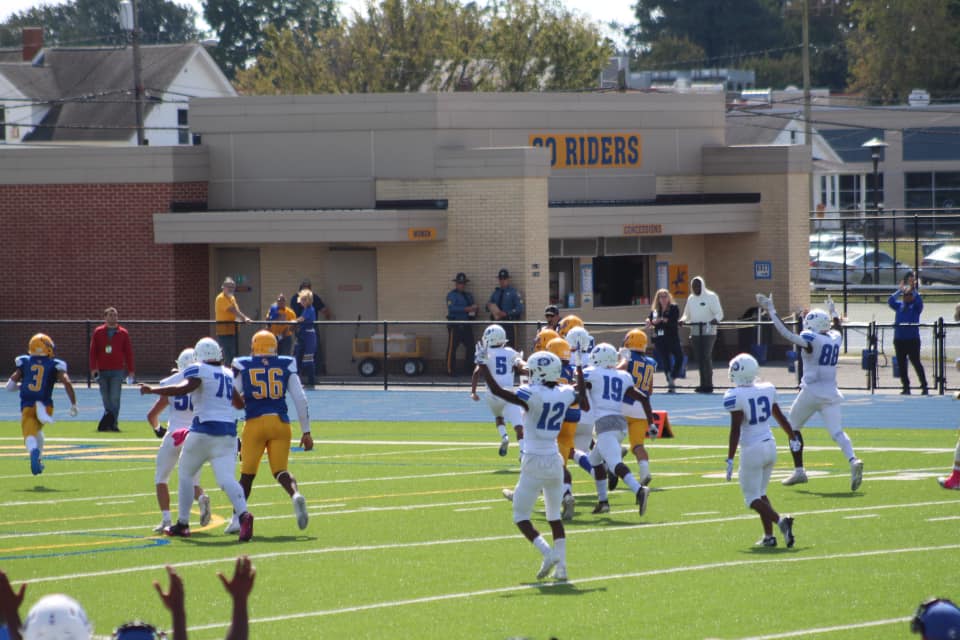 The Dover Senators and Caesar Rodney Riders renewed their cross-town rivalry but not in the normal fashion. This was the 71st meeting in a series that is usually played as the final regular season game on a Friday night. With the new football classifications and shortage of officials, the game this year was played on a Saturday in the middle of the season. On a “picture-perfect” day, Dover scored the first 21 points on the way to a 31-6 victory in front of a sun splashed crowd at Rider stadium.

The Senators scored on their first possession going 3 plays culminating with a 20-yard pass from Jordan Moran to freshman receiver John Parker to go up 7-0 with 9:18 left in the opening quarter. After forcing a Rider punt, Dover scored again just three minutes later as JaKwon Kilby ran for a 60-yard touchdown to make it 14-0. A 49 yard pass from Moran to Tyir Trott and Brandon Yoder’s point after kick midway through the 2nd quarter, and the Senators led 21-0.

The Riders intercepted Moran three times in the game including two picks by senior captain Nate Waite. His first interception came late in the half and led to a 77 yard pass from Andrea Moore to a leaping Julian Harris to get CR on the board trailing just 21-6 going into the locker room.

The defenses controlled the scoreless third quarter as both teams recorded three interceptions on the day, accounting for 6 of the 7 turnovers in the game.

With 8:26 left in the 4th quarter, Dover had a drive deep in Rider territory and settled for a 23-yard field goal by Yoder. That 24-6 lead held up until Erick Seth intercepted Moore for a 73-yard “pick 6” to end the scoring. Seth recorded two interceptions for the Senators.

For Dover, Moran completed 10 of 15 pass attempts for 177 yards and 2 touchdowns, while Kilby led the ground game with 143 yards and a touchdown on 18 carries. Caesar Rodney was paced by Julian Harris’ 44 yards rushing. Rider quarterback Moore completed 5 of 12 passes for 111 yards and the lone CR score.

With the win, Dover now leads the all-time series 37-30 with 4 ties and improves to 4-1 (2-0 in Class 3a-District 2), while Caesar Rodney falls to 0-5 (0-2 in District 2). The Senators travel to Middletown to face Appoquinimink next Friday, while the Riders host Salesianum next Friday in their homecoming game.