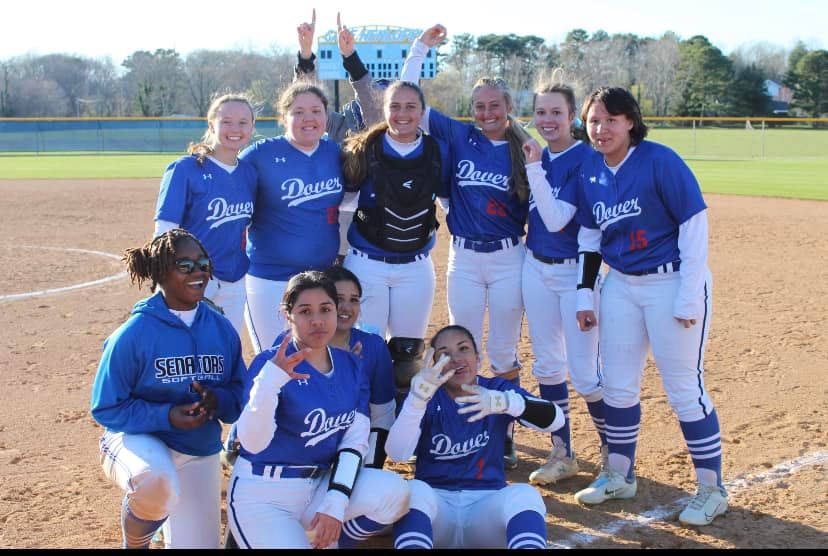 Dover senior Alexis Dowdy was nearly “unhittable” Tuesday as she struck out 12 and allowed just 2 singles in a 5-inning shut-out win at Cape Henlopen 11-0 in the season opening softball game for both schools.

A sparse crowd braved the blustery conditions as wind chills made it feel like 32 degrees. Shortstop Alayna Gigliotti singled to start the game, and after a walk to Dowdy, catcher Jamie Chandler laced a shot through the left side to score the 1st run. Dover increased the lead to 3-0 going into the 4th inning off Cape freshman pitcher Abby Marsh, but the Senators would break the game open with 5 runs in the fourth on 2 walks, 2 errors & 2 hits to take command 8-0.

Chandler led Dover with 3 hits in 4 at-bats including the game’s only extra base hit (double). Gigliotti and Lea Martin both added two hits for the Senators.

Coach Charles Wolleyhand told us after the game, he’s doing his best to make Dover a destination for talent to stay in the state’s capital. “We’re trying to keep girls in the district and not go elsewhere like Polytech, CR or Smyrna. The talent is here, we just need to keep it at Dover High”.

Cape Henlopen coach Shannon Timmons has a very young team with no seniors, one junior and the rest of the roster freshman and sophomores. Freshman pitcher Marsh started the game and was relieved in the 4th by another freshman, Bri Windish. The Vikings two hits came from Jay’lyn Slater and Alivia Heers.

Both teams take to the field Friday as Cape travels to Dover to face ECHS while Dover will be at Seaford.