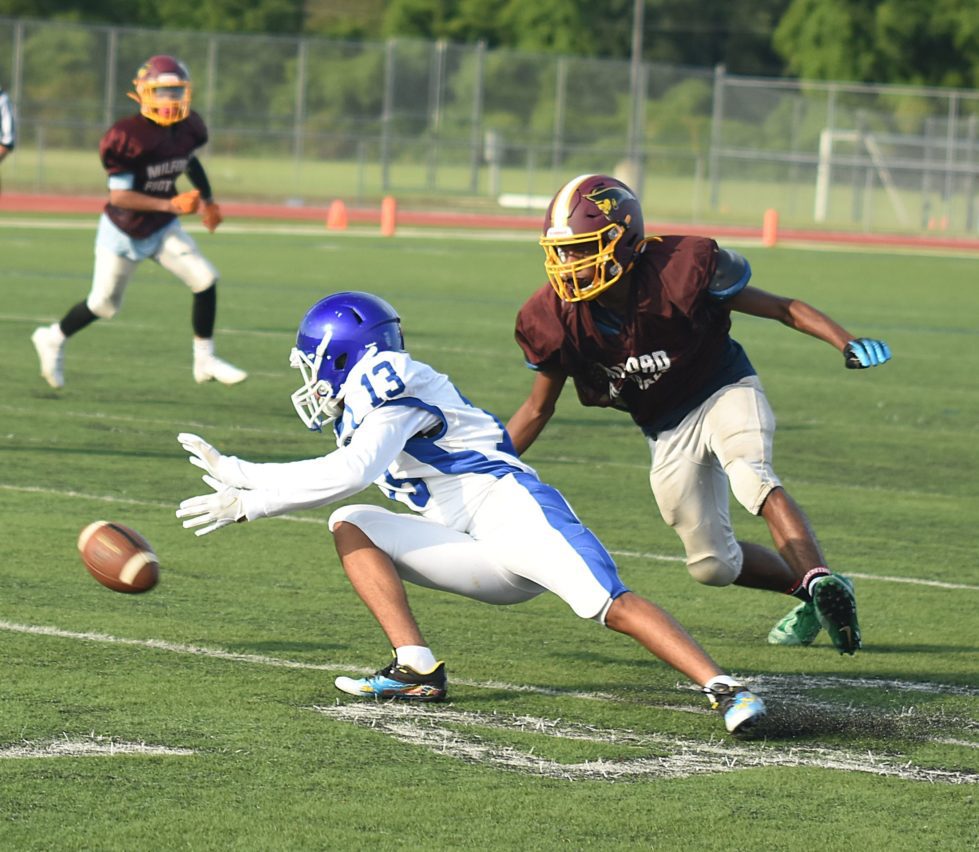 On a pleasant summer day at Briggs Stadium in Milford, the Buccaneers hosted Brandywine in their final preseason scrimmage before games start to count this Friday night. As far as scrimmages go, it was even between the two squads with one significant difference. At the quarterback position – senior Shawn Saxon stood out at quarterback. The Milford running game was solid as well, but Saxon looks once again to take his next progression on what has been a consistent path of improvement during his four years at Milford.

The ball was quick out of his hands, the reads were quick and decisive, and his throws were on the money. Saxon looked like the most poised player on an offense that looks ready to be talented both through the air and on the ground. “We’re pretty excited about the offense this season, I can’t believe that Shawn and Aaron Sivels are seniors this season. They have come so far and I’m really looking forward to what they can do their final year on the field. Both guys are very special players,” Coach Shaun Strickland said.

Sivels’ skill was on display as well on Thursday – the head of what should be a very potent running attack. On Milford’s first offensive series, Sivels looked to be bottled up, but kept his legs churning and eventually busted loose for a 60-yard run to the end zone. “That’s just the type of player Aaron is, he doesn’t give up and stays with the play. He has speed, moves and some power, he is a very special player,” Strickland said.

Joining Sivels in the backfield will be sophomore Elijah Lake, who has a shifty, speedy style of running. Also, in the backfield for Milford, look for junior Jayceir Fullman and sophomore DenNare Horsey to see carries. “We are really blessed to be so deep at running back, these guys work really hard, and we make sure to take advantage of their skill set,” Strickland continued. “That makes us a very versatile team on offense when you factor in the passing game.”

As per usual at Milford most of the linemen will go both ways, this year finds a mixture of upper and lower classmen up front and is expected to be a key group for the Buccaneers. The line will be led by junior Desmond Aladuge and seniors Ja’vion Scott’Warner, Adam Zimmerman, who will be joined by a pair of sophomores – George Hufnagel and Aston Hudson. “Like most of the team, this is a mixture of players learning to play as a unit. I have really liked what I have seen so far, and I expect them to improve as the season goes on,” Strickland said.

On the defensive side, look for a group of linebackers and defensive backs who are fast to the ball and tackle well. This group will be led by senior Jordan Norman, Fullman and sophomore Averi Copes will be three impact players to keep an eye out for.

This will be the first year in which Delaware has three divisions of high school football. Milford will fall in Division 2, which has some pluses and minuses to it. On the plus side, Delmar and Woodbridge return to the schedule, to renew always entertaining Lower Delaware rivalries. Lake Forest will be on the schedule as well, with the annual “Battle of the Bell” falling on Week 4 this season, which may add a bit more spice to what an exciting matchup has always been. On the minus side, Milford has two Maryland teams on the schedule, as it will host Cambridge-South Dorchester on opening night, Sept. 3 at 5 p.m. The Bucs will then take a 1:45 bus trip, each way to face off against North County HS in Glen Burnie, Maryland. “We think it’s kind of neat to renew some old rivalries and battle some new opponents as well. With the new division format, it made scheduling a little tricky, but we are looking forward to it,” Strickland said.

When asked what his goals were for this season, Strickland made it clear, that while he wants to win, playing these games are just as important. “Coming off last season where we only played five games, we would like to get all 10 in this year. With things changing over the last few weeks, you hope we don’t get put in a position as to where we have to shut things down or start missing games,” he said. “The safety of our players always comes first, but it would be a shame to have another season washed away.”