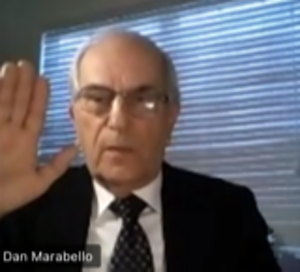 Four Milford City Council members were sworn in at the Annual Reorganization Meeting held on May 3. The meeting was held virtually with each member using their own personal Bible as the Honorable Noel Primos issued the Oath of Office. 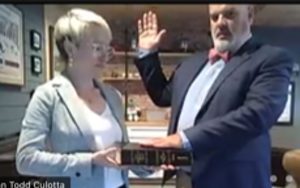 Ward Two Councilman Todd Culotta and his wife, Kalle, as he takes the Oath of Office via Zoom 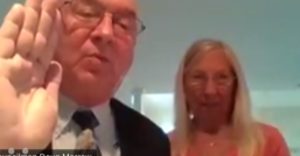 Ward Three Councilman Doug Morrow, and his wife, Linda, as he takes the Oath of Office via Zoom

“I do solemnly swear to carry out the office of councilperson in accordance with the Charter of the City of Milford to the best of my ability,” each council person stated. “Freely acknowledging that the powers of this office flow from the people I am privileged to represent. I further swear always to place the public interest above any special or personal interests and to respect the right of future generations to share the rich, historic and natural heritage of Delaware. In doing so, I will always uphold and defend the constitution of my county and my state.” 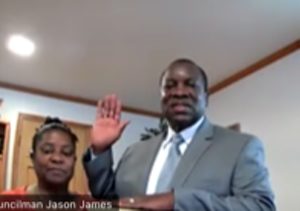 Ward Four Councilman Jason James and his wife, Pam, as he takes the Oath of Office via Zoom

First to be sworn in was Daniel Marabello who represents the First Ward. He was followed by F. Todd Culotta whose wife, Kalle, held the Bible as he took his oath for the Second Ward. Third Ward Councilman, Douglas E. Morrow, recited his oath of office as his wife, Linda, held a Bible while Fourth Ward Councilman, Jason L. James, Sr., recited his oath while his wife, Pam, held the Bible. All four councilmen ran unopposed for their seats.

After the oaths, Councilman James was elected for a second term as Vice-Mayor for the city and David Rutt was elected City Solicitor.

All of those sworn in will serve a two-year term ending in 2023 when the seats will be up for reelection. Councilmen Michael J. Boyle of Ward One, Andrew P. Fulton of Ward Two, Brian C. Baer of Ward Three as well as Councilwoman Katrina E. Wilson have terms that will expire in 2022.