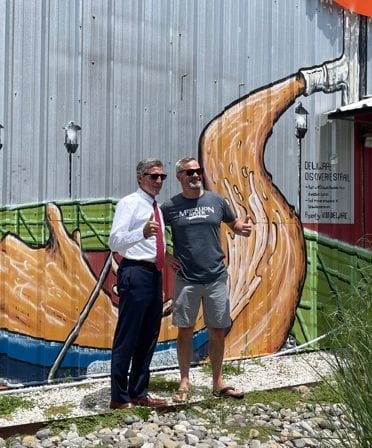 Governor Carney and Eric Williams, owner of Mispillion Brewing as they celebrate the DEWins! program

Governor John Carney visited the Milford area on Fri., June 25 to speak to business owners who participated in the DEWins! program. The program is designed to encourage people to get the COVID-19 vaccination in an effort to win prizes or receive incentives from a local business.

“We are plugging along, glad to be able to get back to business as usual,” Eric Williams, owner of Mispillion Brewing, told the governor. “This time last year, we did not know where we were going to be. I’ve seen some new faces coming in because people are following the beer trail. I think honestly people are just ready to get out of the house.”

“We’ve sold about 40 percent of what we allotted for the giveaway,” Williams said. “We are all fully vaccinated. We made a day of it, a big deal. We all went together to Dover, and it was one of the smoothest things we’ve ever seen.”

Governor Carney explained that the state is on track to have 70 percent of its population with at least one vaccination by July 4, which is a goal set by President Joe Biden. He pointed out that the state is at 69.4 which seems very close but stated that is still about 5,000 people. Williams stated that the lower priced beer and cooler giveaway have met with a few negative comments and Governor Carney stated that he thinks there are about 20 percent who will not get it at all, commenting that it was “fine” if they did not. The DEWins! program ends on July 4.

“During COVID, we did a lot of renovations, just tore stuff down, opened it up and made it more fun,” Williams said about his expanded outdoor space. “We have had live bands come in about once a month. People actually sit out in the parking lot on their tailgates, drink some beer and watch the bands. It is very comfortable for everyone. We added a stage, put in some branded umbrellas. We created an outdoor space that is comfortable, relaxed, a place where you can close off the rest of the world, have a beer, maybe play some cornhole. There is a big dog out here right now and a little one inside, so we are very dog-friendly.”

Governor Carney thanked Williams for not only joining the DEWins! campaign, but also partnering with the state for the beer tour.

“They had a bill that would increase the number of locations,” Governor Carney asked. “Did that pass? Would it effect you?”

Williams explained that, currently, one person could only hold three microbrewery or brewpub licenses. He currently holds one for Mispillion Brewing in Milford and one for Brickworks in Smyrna. He opted out of joining Brickworks in Long Neck as he wanted to hold his third license to possibly open a brewpub in Milford. He told the governor that the bill had come out of the Economic Committee, but that it had not been passed yet.

“It would affect me,” Williams said. “The bill will change the number of licenses from three to five. That would allow me to tell my partners in Long Neck, hey, I want to be involved and still have two licenses available for two more locations. It is very important for the smaller breweries like Revelation, but it will also help the larger ones like Dogfish. Iron Hill is a prime example. They have no more licenses left so they have no issue going to Pennsylvania, Maryland or New Jersey. I don’t want to do that. Right now, restaurants can have as many licenses as they want, like SoDel has about 11 restaurants. I don’t want to go to Philadelphia. I want to keep my business in Delaware. I don’t want to travel to Philadelphia every day. I grew up there, I don’t want to be up there.”

Governor Carney and Anastasia Jackson, owner of Cookie’s Paper Petals, as they celebrate the DEWins! Program

After talking to Williams at Mispillion Brewing, Governor Carney traveled to Cookie’s Paper Petals on Southwest Front Street in Milford where he met owner, Anastasia Jackson and her husband, Tyrel. Jackson explained that she creates paper flowers from card stock that people use for parties, home décor and more. She also teaches classes on how to make the flowers, to which the governor joked that she was teaching people a skill that could put her out of business. Jackson explained that people have fun in the classes, but most say they would prefer to buy them rather than make them.

“I actually started doing this in 2017 as a creative outlet,” Jackson said when Governor Carney asked her how she got into the business. “I lost my grandmother to breast cancer, and I just kept going. It was therapeutic. I posted pictures on Facebook and people wanted to buy them. A lady in Texas bought 200 paper flowers from me and that was the beginning. Cookie is the nickname my grandmother gave me, and she loved yellow roses, so my logo wall is dedicated to her memory.”

Jackson took Governor Carney on a tour of her location, showing him the back room where she has photos of her various endeavors since she began the business. One shows her with a group of women, and she explained that they were from the Ivory Coast.

“I taught them how to make flowers as a source of income,” Jackson said. “I connected with an app called Clubhouse and a lady asked me if I would teach the girls how to make the flowers. I told her I wanted to teach the moms, so I taught mothers and daughters what I do.”

As part of the DEWins! program, Jackson will offer free classes to as part of the lottery system created by the state. Those who have been vaccinated are entered into a drawing where they could win free classes at her establishment. She has also partnered with Cricut and was recently featured in their global email. She also appeared on Good Morning America, which she said was an “awesome experience” that caused her “phone to ring off the hook.” Jackson took Governor Carney upstairs where he viewed her studio where she creates her Facebook Live events and her husband’s studio where he creates podcast related to sports. She then took the governor into another room where she shared her next vision, a co-working craft space for which she has applied for an EDGE grant.

“Have you ever been to The Mill in Wilmington?” Governor Carney asked. “You need to go there before you dive into this. They have a common area not much bigger than this, but they also have smaller spaces. Members can rent a seat or an office, go there and work without the overhead as they start their business. The idea is that there are people who have ideas like yours, they come here, and they work on them without the overhead. As they grow they graduate to an office. They had people who started there with two and eventually graduated out because they had more than 20 people now.”

Governor Carney explained that it was more than just office space. It provided like-minded people the ability to collaborate, connecting one idea with another that could spark a new business. He suggested that Jackson add a small bar in her space which worked well at The Mill.

“On Friday afternoon, people who are members who have been working on their own ideas, get together at the bar,” Governor Carney said. “They collaborate and brainstorm in a social setting. It is just the whole eco-system, a word they use.”

Governor Carney talks to Rous Robles, co-owner of My Sister’s Fault, during a visit to Milford

After finishing at Cookie’s Paper Petals, Jackson took Governor Carney across the hall to My Sister’s Fault where he purchased several slices of cake and spoke to co-owner, Rous Robles. He asked Robles what the biggest challenge the sister’s met when deciding to open their business.

“Staffing,” Robles said immediately. “When we first started, it was just me and my sister. We did all the cooking, and we were still working at other jobs. We used to sell out immediately and that was a challenge. I am a home baker, I learned to bake at home, so it was a challenge to meet the demand. We are meeting the demand now because we have grown from just the two of us to 10 in just a few years.”

Governor Carney asked Robles who handles the business side of the bakery like accounting and payroll. Robles said her sister, Angie, who calls herself the “Savory Sister,” handles the books, social media, the schedule, payroll and anything else that has to do with a computer. Robles, who is known as the “Sweet Sister,” stated that she also taught her sister how to make the breads they use for some of their savory dishes.

“I told her from the beginning that I can’t do books or anything that isn’t pretty,” Robles said. “If something is not pretty, I will not do it. The computer? I would fall asleep immediately if I had to do any of that.”

“We have purchased the land next door, it is only grass right now,” Robles told Governor Carney. “It is ours. We own it. We have outgrown this space. It is tight in the kitchen, but we are making it work. We are planning to build a new, two-story building on the lot we purchased. We have an architect and a builder, the plans are ready. We are just waiting on the permits to get started.”

Governor Carney provided contact information to Jackson for those at the state level who may be able to help her get her co-working space off the ground.