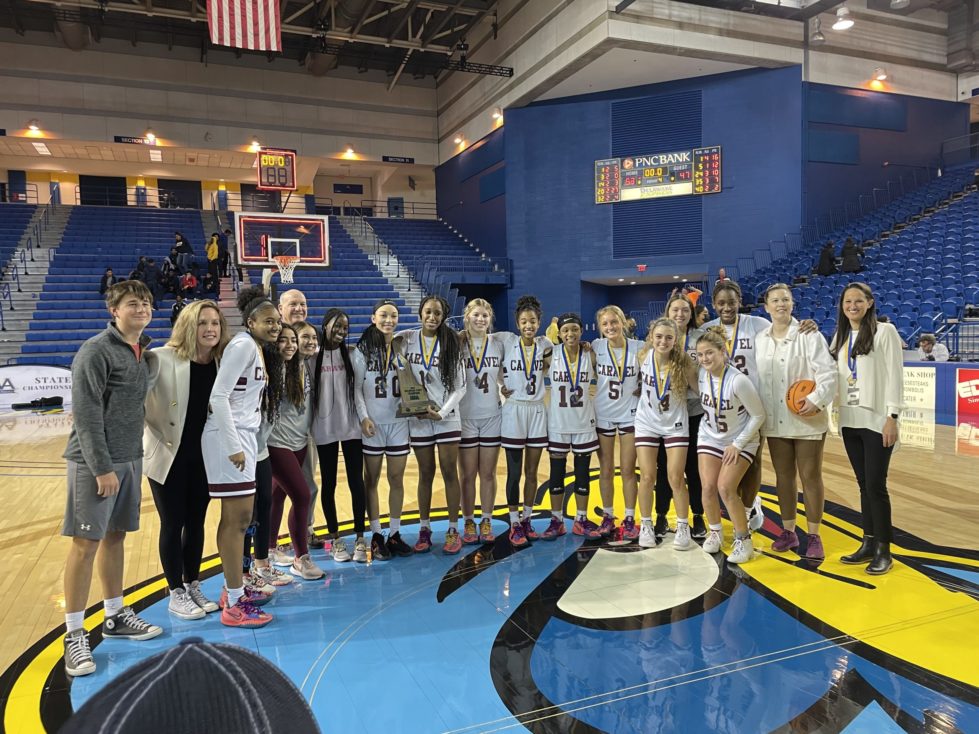 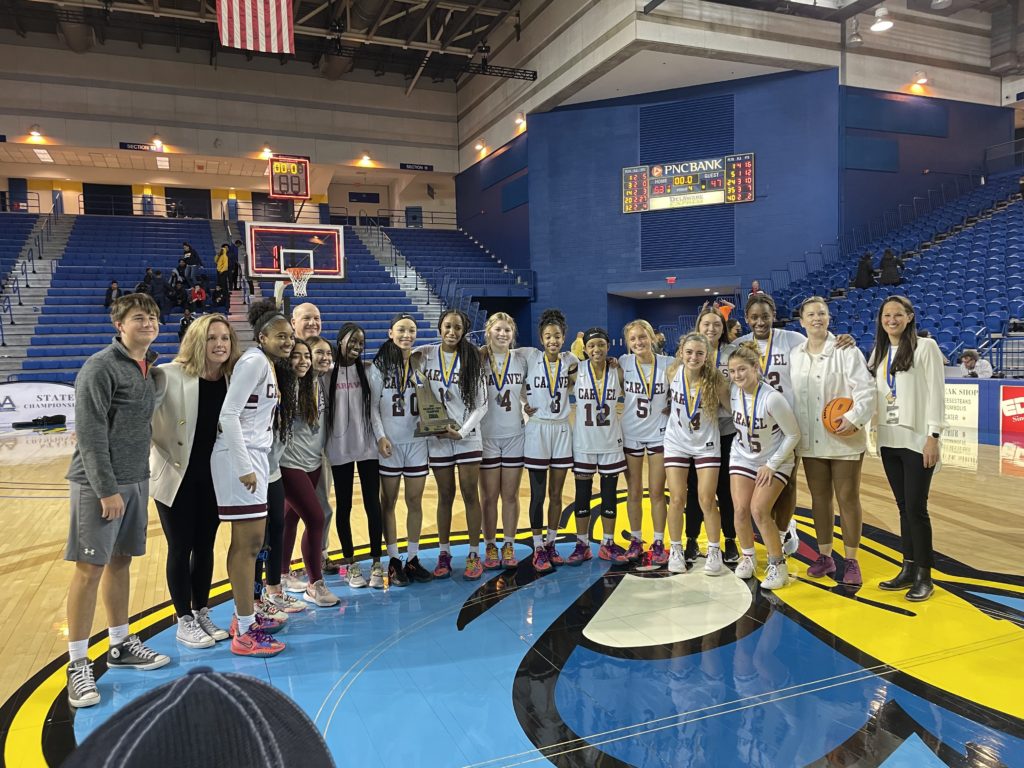 NEWARK — The sixth time was definitely the charm.

Caravel, a perennial power in Delaware in girls basketball, had gone 0-5 in the DIAA championship game since 2013. But one of the players who was on the last team to make it to the title game made sure 2022 would be different. Senior India Johnston, playing her last high school game, scored 27 points to help the Buccaneers at last take home the trophy after a 53-47 overtime thriller over Sanford at the Bob Carpenter Center on March 11.

“I was at a loss for words. The first thing I did was just cry with excitement,” Johnston said. “It’s just really unreal right now.”

The top-seeded Buccaneers fell behind early in overtime, but Johnston – with a huge assist to sophomore guard Jasiyah Crawford – got them back in front and guided them to victory.

Sanford, the No. 2 seed, was in comeback mode most of the night, but the Warriors got off to a good start in the extra period as Zoe Kashner hit a short jumper 48 seconds in. Kashner had a solid night after being pressed into a starting role because of an injury to Amiya Carroll.

Buccaneers sophomore guard Jasiyah Crawford was a big scoring presence early in the game, but she had been held off the scoreboard after the first quarter until coming up big after Kashner’s basket. She set up outside the NBA three-point line at the Carpenter Center, took a pass from Giniah Gale and put up a high-arcing shot that seemed to hang in the air forever. It came down with a swish, thrilling the large Caravel student section behind the basket and giving the Bucs the lead for good.

“I had no doubt that I could shoot. I trust myself. I trust my team. The coach trusts me to take that shot. I knew it was going to go in,” Crawford said.”

The Buccaneers got the ball back after a Warriors turnover, and Johnston hit a pull-up jumper with 1:57 to go to extend their lead to three. She was fouled the next time Caravel had possession, and she made two free throws. Johnston then hustled back for a defensive rebound, got fouled again and made two free throws again as the lead reached seven with 50 seconds to go.

But the job was not done, and Bucs coach Kristin Caldwell looked on nervously from the sideline. Pierce hit a pair of free throws, but time was running short. After one last free throw from Johnston, the clock finally hit zeroes, and Caldwell, who has been associated with Caravel as a student, athlete, teacher and coach for decades, could finally relax.

“A little bit of everything” is how Caldwell described her emotions. “It was better than I thought it was going to be. I had so much belief in this group. Everybody has input in basketball, the outside noise. This group trusted me. I trusted them.” 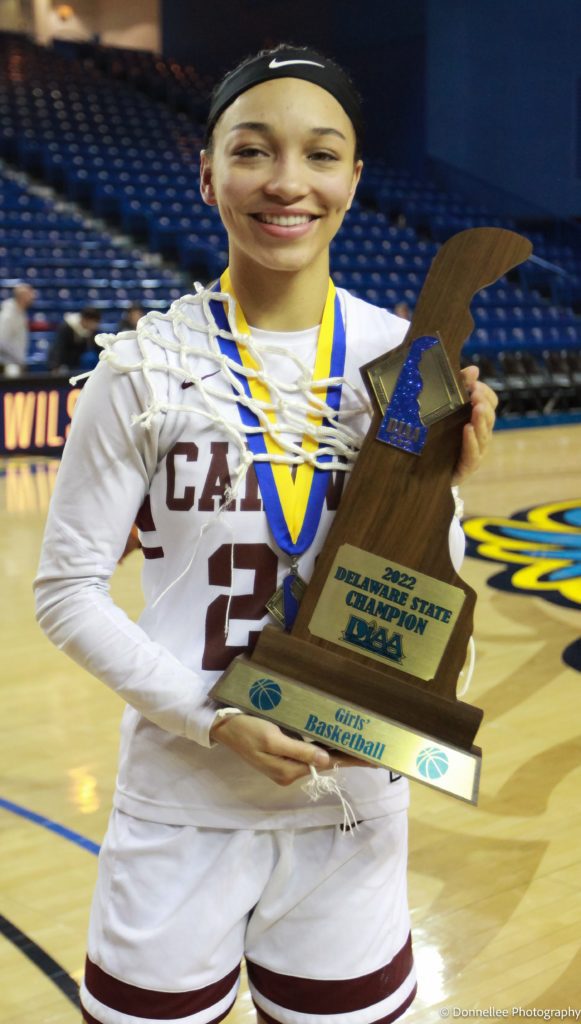 Johnston, who was a freshman when Caravel lost to Sanford on a last-second shot in the 2019 championship game, said she was at a loss for words when the buzzer sounded.

“The first thing I did was just cry with excitement. I was just happy that I could do this for my team. It’s just really unreal right now,” she said.

Caravel led most of the night after a big first quarter that included a trio of three-pointers by Crawford. But the 19-10 lead methodically shrank thanks to the Warriors’ relentless pressure and trapping on defense, along with some clutch shooting by Dallas Pierce, Zy Kilgoe and Abby Meredith. The Warriors had an 11-0 advantage in points after turnovers in the first half, helping to offset the five three-pointers sank by the Bucs.

A six-point halftime advantage was cut to three after three quarters. Caravel committed six turnovers in the third, and Meredith made them pay for one with a three that cut the Bucs’ lead to 29-26. A minute and a Caravel free throw later, Meredith hit from deep again after an offensive rebound by Kashner. That brought the Warriors back to within a point.

Sanford’s Jada Snow drained a triple 21 seconds into the fourth to tie the score at 35, and the race was on. Kilgoe drove for a layup with 5:44 remaining to put the Warriors on top, 39-38, for the first time since it was 4-2. The margin didn’t get above two points until well into overtime.

Sanford had a 43-41 lead in the final minute, but Johnston came up with a key steal as the Warriors tried to run out the clock. She was fouled on her approach to the hoop and calmly sank a pair of free throws with 31 seconds on the clock.

“When it came down the stretch, the ball was in the right person’s hands, period,” Caldwell said. “India had it. And they had to foul the best player in the state, and she was clutch.”

Sanford was unable to connect on a shot before regulation ended.

Caldwell said the ability to withstand Sanford’s comeback speaks to the toughness of her team. That they held the Warriors to 47 points after surrendering 73 in a regular-season loss reflects the concentration on defense in the title game, the coach added.

Aside from Johnston, Crawford reached double figures with 12. Gale led the Bucs with eight rebounds. The Bucs finished the season with a record of 18-6.

Caldwell appreciated the support from the Caravel students and families, and she added that she saw people at the Carpenter Center that she hadn’t seen in years. It shows what a community the school is, she said.

“It’s a family,” she said. “I’m so fortunate to work there and coach there. I’m so proud that we could do this for us, for the school, to represent the Peoples family. It’s just the absolute perfect ending.”

Sanford, which wrapped up the year at 20-3, placed three players in double figures, beginning with Kilgoe with 16. Meredith had 12, and Pierce added 10. Kilgoe also had four steals. Kashner led the way with nine rebounds.

The Warriors lost for the first time since Dec. 5, after which they ran off 19 straight wins.