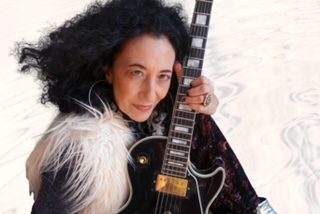 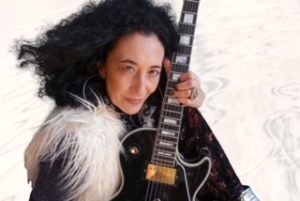 Latino guitarist, songwriter, singer and activist Eljuri will be one of the headliners for the Ladybug Music Festival

Cecilia Villar Eljurii, known professionally as Eljuri, is a singer/songwriter and guitarist who has been playing music since she was a small child. A Latina musician, she was born in South America and remembers the sounds of Afro-Cuban, rumba and flamenco music in her home growing up. She will be one of the headliners at the upcoming Ladybug Music Festival planned for July 30 in downtown Milford.

“My music is a fusion of that and, I am also an activist, so my lyrics have messages around socially conscious issues,” Ejuri said. “A couple of years ago, my path crossed with Gable Entertainment who operates the Ladybug Festival. I think I was promoting one of my records that was kind of a reggae record. We ended up doing a Zoom live performance for the festival last year, I believe, and when I heard they were doing the festival again, I was excited because my new album comes out in September.”

Touted as one of the top Latina guitar players in the world as well as a rockstar humanitarian, Eljuri develops hypnotic and undeniable melodies that are familiar and foreign all at once. She has been touring internationally for a decade and is excited to release her fifth studio album “Reflexion.” As a female artist, however, Eljuri has seen first-hand the challenges that face women in the music industry.

“You know, the issue is really that a lot of talent buyers are men and they tend to choose male-led bands,” Eljuri said. “So, the fact that Gable Ventures is so progressive and brave to do 100 percent women in the lineup is something I greatly admire. Being a big Latin artist, it’s rare that gender equity issue is on the table. I do feel it’s not just talent buyers, but there’s also just everything, the stagehands, the engineers, the talent, the people running the show, we need to get more women in there.”

Touring the world, Eljuri enjoys visiting new places and she is excited that there will be 35 different acts, all led by women. She is proud to be part of what she feels is historic and a breakthrough in the music industry. Eljuri pointed out that there is an organization in Europe trying to promote 50/50 equity in festivals, so for Gable to promote a complete female-led lineup is a step in the right direction.

“The biggest challenge I face in what I do is what most artists face,” Eljuri said. “You are looking at other people to validate you. You want people to hire you or to hear your music played on the radio. You start to feel that no one is paying attention and during COVID, it was really tricky because motivation comes from connecting with audiences. So, when that was taken away, I had to look inward for that gratification and I figured since I was at home anyway, I may as well write some new songs.”

The most gratifying part of her career is when a song she has written speaks to someone. She loves to hear from people who feel her music is inspiring because Eljuri says that inspires her. The creative process is very parallel, Eljuri explained. Her latest single “Salva La Tierra” includes a music video created by an illustrator, Anna Raff which she says she is very proud of. The song has a choir and focuses on climate change as Eljuri believes everyone can help stop the progress.

“As a Latina musician living in the United States, my lyrics and social engagement are paramount to my life’s purpose,” Eljuri said. “My greatest passion is songwriting. I consider myself a conduit to the voices of those I encounter as I travel and tour internationally. In addition to having the great privilege of my platform as a performing artist, leading workshops, participating on panels and working with many socially relevant cases wherever I tour, in my hometown of NYC and abroad, I work to make a difference for my community.”