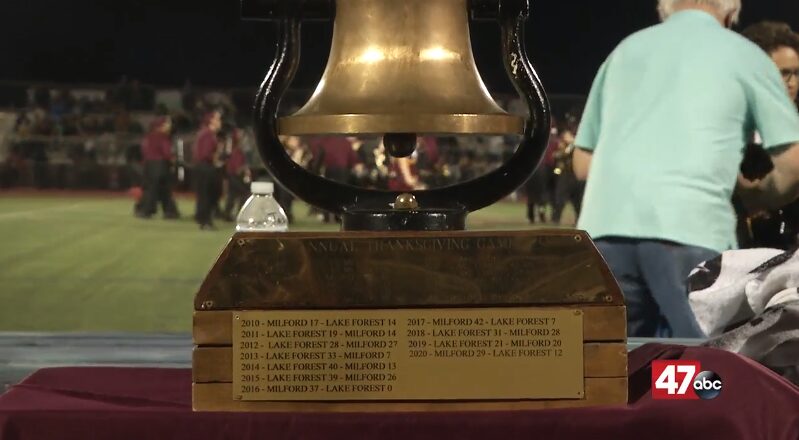 Battle of the Bell photo courtesy of 47ABC

Felton – Each year for the past 54 years Milford and Lake Forest play for possession of a trophy made from a bell taken from the train that ran from Harrington to Milford when the route was decommissioned.

“Winning the bell is important to not just the players, but the community. Twenty years from now these players will talk about this game tonight, I still talk about my years with my old teammates,” Lake Forest head coach Freddie Johnson said.

Lake Forest scored three straight touchdowns in the third and fourth quarters to pull away from Milford as the Spartans retained the bell with a 52-26 victory.

Midway through the third quarter the game resembled a tug of war as each team made scoring runs. Jonathan Tyndall opened the scoring for the Spartans on a one yard run on the games first drive giving Lake Forest a 6-0 lead. 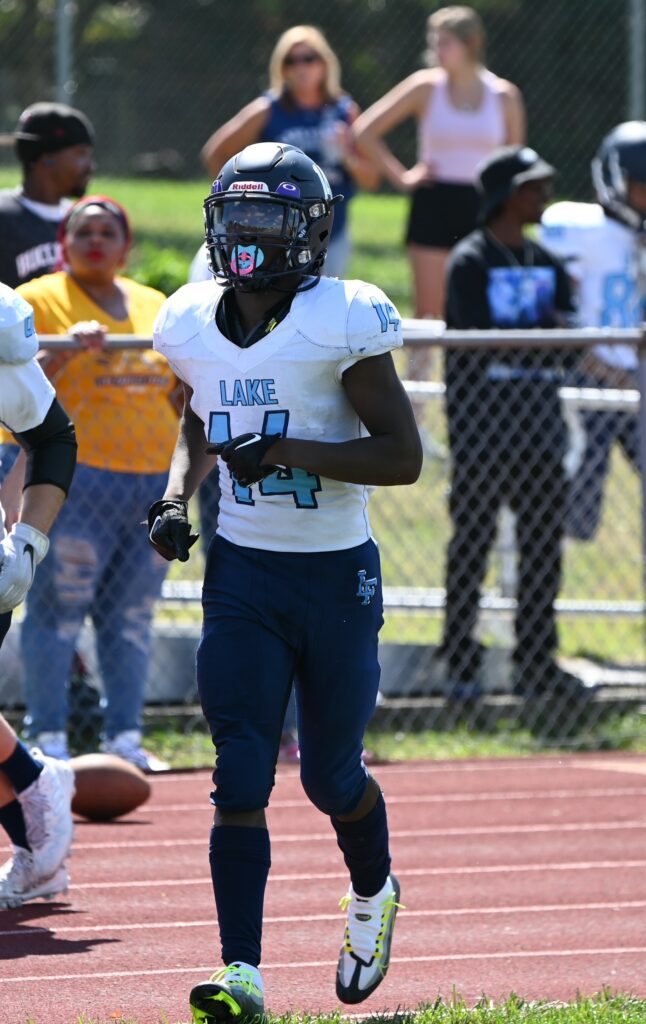 Milford was forced to punt on their first possession, Jaymeire Snell fielded the punt and returned it 55 yards for a touchdown putting Lake Forest up 12-0 midway through the first quarter.

Milford answered just a minute and a half later when Lake scored on a five yard run and Ryan Mejia converted the run to cut the lead to 12-8.

Snell scored his second touchdown on a 27 yard run. Calif Spencer converted the run as Lake Forest went up 20-8. Mejia mishandled a snap on fourth down and the Spartans received the ball at the Milford five yard line. Two plays later Jamir Marable followed with a 10 yard scoring run of his own. Tyndall connected with Earl Downing for the conversion as Lake Forest extended their lead 28-8.

The first half ended on a wild two minutes as Milford was driving deep into Lake Forest territory, but the Spartans forced a fumble and recovered it at their own three yard line. Just as it appeared the Spartans would take a comfortable lead into halftime, Snell took a pitch from Tyndall. Charles Shorts stripped the ball and recovered it in the endzone for a Milford touchdown cutting the lead to 28-14 with 1:20 left to play in the first half.

On just the fourth play of the second half Milford closed the gap when Mejia connected with Andrew Kravitz on a 35 yard scoring strike down the right sideline. Both teams’ kicking woes continued as the point after kick failed and the Bucs cut the lead to 28-20.

On third down Mejia dropped back to pass from his endzone when Calif Spencer stripped the ball from behind, Anthony Lewis fell on the ball for a touchdown and a 34-20 Lake Forest lead.

The Bucs answered quickly on the ensuing kickoff when Wilderson Alexandre returned the kick 82 yards for a touchdown cutting the Spartans lead to 34-26 keeping the game within a score.

That’s when Lake Forest struck for three consecutive scores starting with a 10 yard run by Young, a 55 yard pass from Tyndall to Johnson Oakley and finally a three yard run by Marable as the Spartans extended their lead to 52-26.

Lake Forest amassed 335 yards of total offense with 260 coming on the ground including 16 first downs. Young led the rushing attack with 128 yards on 21 carries and a touchdown. Snell had three carries for 76 yards and two touchdowns.

“This was a total team effort,” Johnson said. “A lot of guys contributed in the game and we had a bunch of guys touching the ball.”

Milford falls to 2-1 on the season and 0-1 in District 3. The Bucs travel to Delmar next Friday for a 7:30 kickoff. Lake Forest improves to 2-0 overall and 1-0 in District 3 and will travel to Delcastle next Saturday for a 11:00 am kickoff.