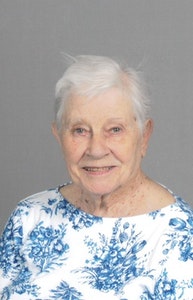 Lida Wells, a leader in the Milford community, passed away at the age of 97 on March 10. Her son, Joe, posted about his mother’s passing on his Facebook page.

“My mom, Lida Wells, passed away Wednesday after 97 years on this Earth,” Joe posted. “She went peacefully at home after 7 years of wrestling with dementia and its inevitable affects on body and mind. What a life she lived and the people she touched in her sphere of family, friends, social and business connections. A world traveler, hitting every continent but Antarctica, she was a doer at every level:  Wife, Homemaker, Mom, Aunt, Granny; always supportive of those around her. A Realtor icon, breaking the glass ceiling to become President of the Delaware Association of Realters in a time when 90% percent of Brokers were men. Milford Hospital Fair chairperson for 10 years running. President of the Shawnee Country Club in 82-84, orchestrating the funding & construction of the “back nine” holes. Active in her church, implementing a children’s library and art gallery, etc. etc. etc. Above all, she was the greatest Mom in the world. Will miss you, Mom, thanks for being there for me.”

His post was actually an understatement when it came to his mother. Lida Maude Wilson Wells was born in Pocomoke City, Maryland. Lida moved to Milford the day after her high school graduation in 1940. She began working for the Masten Trucking Company before moving to Salisbury to attend the community college there. When World War II began, the community college changed to year-round status, which meant Lida could not work during the summer. She returned to Milford and her job at Masten Trucking.

Two years later, Lida married J. William Wells, the son of George B. Wells. Known as “Bill,” her husband came to Milford as a child after being born in Salisbury. He became associated with the Milford Trust Company Bank before joining the Air Force in 1942. He was honorably discharged as a Staff Sargeant in 1945 after being awarded the Air Medal with one Oak Leaf Cluster and the Distnguished Flying Cross. In October 1945, Bill became the secretary of the Milford Building & Loan Association and carried a line of general insurance, representing several old line, reputable insurance companies.

Lida did not enter the business world until her Joe was a teen and resumed her college studies at the University of Delaware in 1972, taking most of her classes at the Delaware Technical and Community College Owens Campus, the same year her son enrolled at the university, attending the Newark Campus.

“He’s always been one of my strongest supporters as far as going back to school,” Lida said in a 1985 interview. “It took me four years to do what he did in three. I always wanted to complete my liberal-arts education.”

Although most of the student’s studying with her were her son’s age, Lida immersed herself in the experience. She took a trip to France with the school, staying in hostels with minimum accommodations. On the trip, she avoided lines for the women’s toilet facilities by making an agreement with the men in the group to use their bathroom.

Lida earned her real estate license in 1973 not realizing that it would lead to a full-time career as the broker of record for Wells Agency, a real estate company she operated across the hall from her husband’s insurance office. Her husband passed away at the age of 68 in 1990 and, in 1995, Lida earned her master’s degree from the University of Delaware.

Even in her leisure time, Lida remained busy. She was the first president of the Sussex County Arts Council and served on the Delaware Arts Council. An avid golfer, she oversaw the addition of nine holes at the Shawnee Country Club, finding the right finance source to carry out the project. In 1988, she was invited by Nevin Curtis to be a member of what was then Delmarva Power & Light’s board of directors.

Lida loved to read and built up a church library of more than 1,300 books over a 13-year span at Avenue United Methodist Church. She also helped develop an arts program that promoted high school artists, offering prizes for their work. She also welcomed famous Delaware sculptor Charles Parks and author Isaac Asimov as speakers for the program.

Despite her community and business focus, Lida would say that the role that gave her the most pleasure was as mom and grandmother.