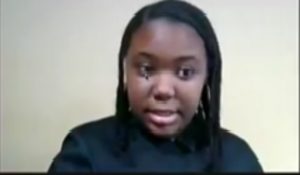 Deena Johnson, a senior at Milford High School, participated as a finalist in the MLK Voices 4 Youth competition

Deena Johnson, a senior at Milford High School who plans to attend college to study either business or health administration, participated as a finalist in the 6th Annual MLK Voice 4 Youth Finals on Sunday, January 17. The ceremony, which was held virtually due to the ongoing COVID-19 pandemic, was hosted by Kaamilah Diabate, the 2016 winner of the competition and Da’Jour Jones who competed in the 2020 contest.

“This is our sixth year providing high school students with an opportunity to voice their opinions on things that are important to them,” Diabate said. “This year has been a difficult year for everyone but even in times of adversity, when the world is shut down, your voice still matters.”

Stephanie Staats, CEO of the YWCA Delaware, who, along with Christ Church Christiana Hundred, managed the competition, explained that the YWCA’s mission is to eliminate racism, empower women, stand up for social justice and strengthen communities.

“We support efforts to confront the underlying prejudices and practices that deny so many the opportunities to pursue and achieve their full potential,” Staats said. “We embrace the principles of inclusion, passion and human dignity. It is for those reasons and so many others that the YWCA has partnered again with Christ Church Christiana Hundred to share with you today the creative and inciteful messages of amazing Delaware youth. These messages resonate with the spirit of Dr. Martin Luther King’s legacy of service, education and peace.”

According to Reverend Ruth Beresford, Rector of Christ Church Christiana Hundred, the partnership with the YWCA developed because one of their members, Jane Rubini, founded the contest. Rubini had the idea that the voices of young people needed to be heard and that connecting those voices with the messages of Dr. King would help young people gain an understanding of Dr. King’s vision.

Johnson competed with six other students. Three of the students, Neha Das, Rishima Mall and Adithcharan Thyagarajan were from the Charter School of Wilmington. Desere Ndikum from Newark Charter School, Jamal Powell from Powell Academy Home Schooling and Sanchez Raymond of Cape Henlopen High School also competed. Students were required to present an original message related to the life and beliefs of Dr. Martin Luther King. Presentations had to be no more than five minutes long and could not include props, audio or costumes. All finalists were awarded a $50 gift card.

Johnson’s presentation focused on Dr. King’s last speech, delivered on April 3, 1968 at Mason Temple in Memphis, Tennessee. Dr. King was assassinated the next day. Known as his “I’ve Been to the Mountaintop” speech, Dr. King ended his speech with the statement that he “just wanted to do God’s will. And He’s allowed me to go up to the mountain. And I’ve looked over. And I’ve seen the promised land. I may not get there with you. But I want you to know tonight, that we, as a people, will get to the promised land.”

Johnson’s presentation questioned what King’s words, wondering whether he had seen the other side, pointing out that there were still injustices in this country.

“MLK, you said you’ve been to the mountain top, you said you’ve seen what’s ahead, so when does it end?” Johnson asked. “When does the struggle end? How many times do we have to walk around the city before it falls? Have you seen the other side, because, right now, all I see is police brutality and the murders of black people? It did not end with you. There were those before you like Emmett Till and Malcom X. There are those after you like George Floyd, Breonna Taylor and Ahmaud Arbery. The list goes on. It makes me wonder if I will be next. It makes me wonder will I be murdered walking in the streets. It makes me wonder if I will be killed in my bed. Will I die gasping for air saying I can’t breathe? No. I do not have a weapon, please do not shoot. It makes me wonder if that phone call will say my father is not coming home, my brother is in jail, or, even worse, they are dead.”

Johnson also talked about how healthcare often failed people of color, commenting that medical textbooks often don’t provide answers on how to treat people like her.

“They say skin color means nothing, but it means everything,” Johnson said. “You wonder why we have no trust in the COVID vaccine. Maybe, because every experience we have had, we have been treated wrong and violated. Just because a black nurse worked on it does not mean it is safe. We’ve been there and done that. For all we know, this could be another method of population control. Have you seen the other side? MLK, you said silence is betrayal, but here, noise can bring death. We peacefully protest human rights, but we are thugs and deserve to be punished. We are pushed, beaten, tear-gassed and arrested for walking the streets we built. MLK, I know you have been there, done that, you’ve seen that, felt that and experienced that. We still live in the same Jim Crow, segregation, live low slave nation. It works for the whites but not for the black. Just like you, Dr. King, we are waiting for our nightmare to turn into a dream, your nightmare to turn into your dream. Dr. King, when you looked over that mountain top and you saw what was ahead, what did you see? Was the face of America finally the same?”

Senator Tom Carper spoke after the presentation of all the finalists, reminding the young people that Dr. Martin Luther King’s life was about service. Senator Carper reminded the young people that they should go through life and look for ways to serve others and make a difference in their lives, not only to bring joy to others but also to provide great joy for themselves.

“Your voices of passion and purpose, your honesty and honor, the promise of your future and the poetry of who you are right now, we hear you,” First Lady Tracey Quillen Carney said. “In the words of Amanda Gorman, a young black woman poet and the first National Laureate Poem in the United States, ‘There’s a place where this poem dwells – it is here, it is now, in the yellow song of dawn’s bell; where we write the American lyric, we are just beginning to tell.’ Keep telling it and thank you.”

Matt Meyer, New Castle County Executive, who provided the gift cards for all the finalist, stated that it was important to listen to youth in order for leaders to learn new ways to look at things. Meyer stated that it was especially important this year due to the things happening in communities.

“More than 25 schools and organizations participated in the competition and Deena was chosen as one of the seven finalists,” Dr. Kevin Dickerson, Superintendent. “We are very proud of Deena for reaching this level of the competition and know we will see great things out of her in the future.”

The winners were announced at the end of the program. All three winners were from the Charter School of Wilmington. Rashima Mall took the third place $500 prize while Adithcharan Thyagorajan took the second place $1,000 prize, The winner of the first place $2,000 prize was Neha Das.