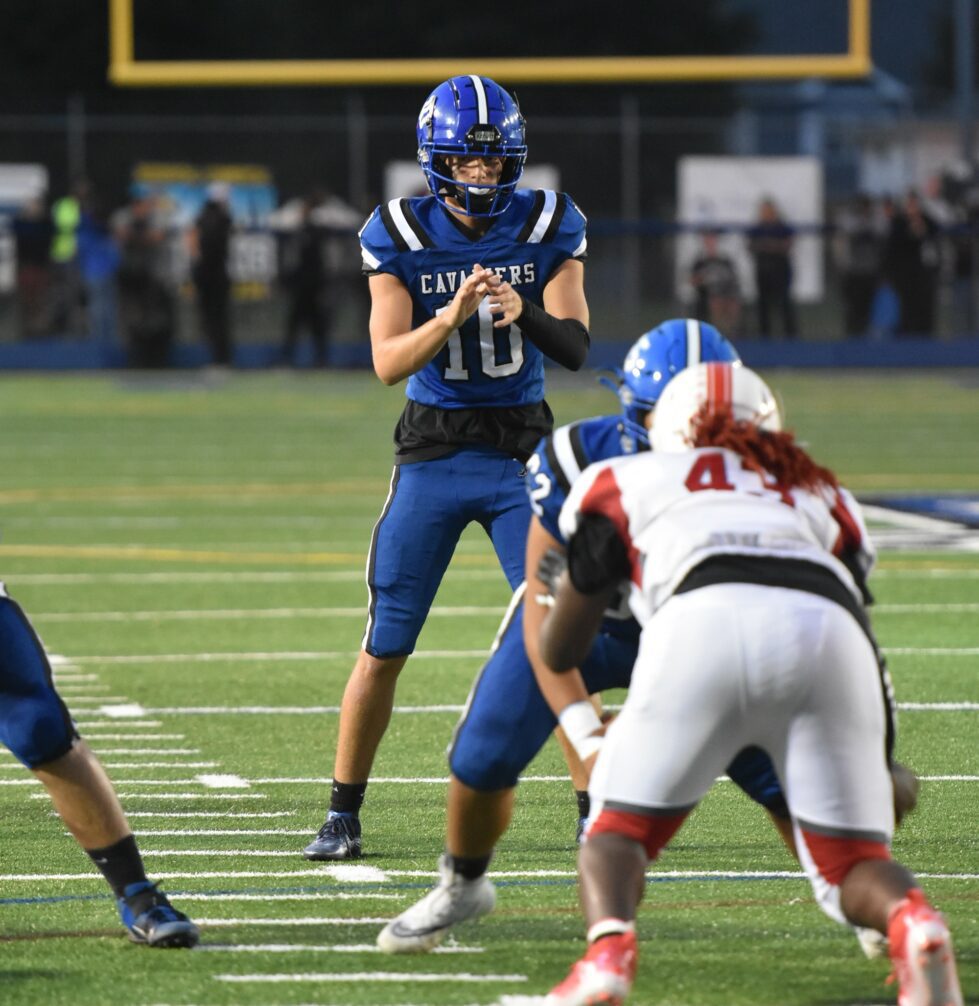 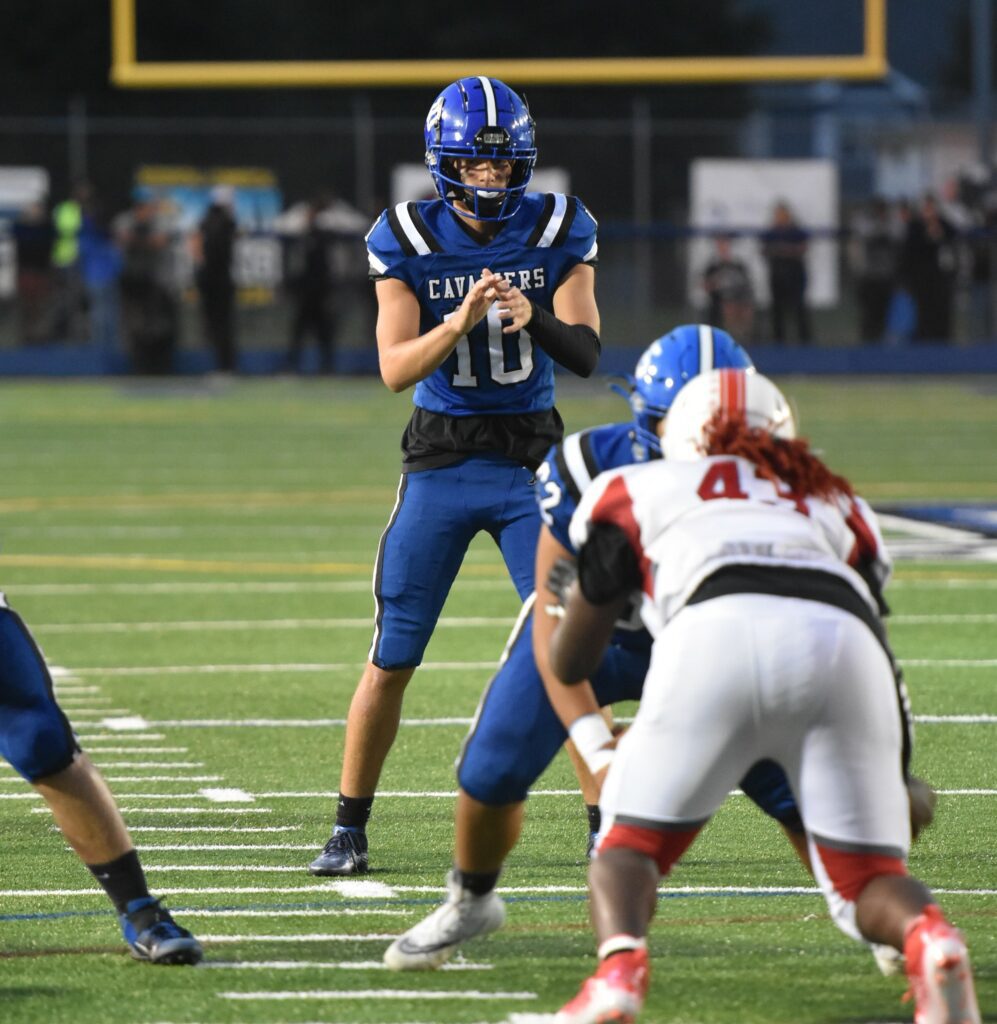 Middletown quarterback Austin Troyer about to take a snap against Smyrna, photo by Ben Fulton

Middletown continued its dominance over Smyrna in regular-season games, winning the annual Harvest Bowl in a “thriller” in front of a packed house at Cavalier Stadium. In a contest dictated by the home team in the opening half, and the visiting Eagles in the second half, it came down to a 4th down and 13 pass play with :13 left for the Cavs to gain the victory.

Both defenses played extremely well and it took a turnover to produce the game’s first points. Middletown blocked a punt and recovered on downs at the Smyrna 22. That led to a Josh Roberson touchdown run of 11 yards and an Austin Hamm extra point to put the Cavs ahead 7-0 late in the 1st quarter. It appeared the two would head to the locker room with that 7-0 score but Middletown quarterback Austin Troyer engineered  a fantastic drive beginning at the Cavs 31 with 2:30 to go. First he connected with Ty Hynson across the middle for 17 yards up near midfield. Then a swing pass to Roberson for 8, and a leaping catch by Noah Kracyla for a 1st down at the Smyrna 38. Two plays later Matt Priestly had a 38 yard TD called back for holding and Brandon West sacked Troyer pushing the ball back to the 42. Undaunted, Troyer scrambled to his right and found Hynson down the sideline for a 1st down at the Eagle 20. His scrambling ability came to fruition just two plays later as he completed a TD pass to Vernol Gary in the back of the endzone giving Middletown a 14-0 advantage at the half.

Smyrna came out “fired up” to start the second half. After the defense forced Middletown to a “three-and-out”, the offense took over at their own 25 with 10:40 to go in the 3rd quarter. The combination of Brian Wright and Yamir Knight taking snaps resulted in a drive that ate up 5:00 and covered 75 yards culminating in a Markell Hohlman 10 yard run and a Hohlman conversion run to bring Smyrna to within 6 points of the Cavaliers at 14-8.

Early in the final quarter the Smyrna defense forced yet another “3-and-out”, taking over at their own 37 following the punt. Middletown’s “D” bottled up the Eagles run-game forcing a 4th down and 13. Yamir Knight is also the punter and most of the night he rolled out to his right to make the kick. This time he followed several blockers around the right side for an 18 yard gain to the Cavs 47. On the very next play, sophomore Timothy Yancey took the direct snap, cut up the middle then raced untouched for a 47-yard touchdown on his first (and only) rushing attempt of the game. The Hohlman conversion attempt fell a yard short, leaving the game tied at 14-all with 9:20 to play.

The two defenses took over control of the game at that point, as it appeared we were headed to overtime. Smyrna was forced to punt with under a minute left in the game when Michael Pearson returned the kick to the Eagle 29 yard line. On 1st down, Cole Moyer blitzed off the edge forcing Troyer to step up in the pocket right into the arms of Nasir Jenkins for a sack. That was the fifth sack of the night, with four coming in the 2nd half alone and most with only a 3-man rush. Quickly, Troyer gathered the offense and spiked the ball to stop the clock. An incomplete pass brought us to a 4th down and 13 at the Smyrna 32 with :19 to go and everyone in the stadium on their feet in anticipation of what could be the final play of regulation. That’s when Troyer was “flushed from the pocket, scrambled to his right and with Nate Chandler in his face, found Kracyla open in the endzone for the winning score. What a gritty performance from both teams in what I would describe as a “classic” Harvest Bowl. This game had all the ingredients…a great crowd, perfect weather conditions, dominating defenses, and clutch offensive plays.

Middletown improved to 1-1 with the 21-14 victory while Smyrna falls to the same record of 1-1. Troyer passed for 166 yards and 2 touchdowns to lead the Cavaliers. Smyrna limited the Cavs to just 44 yards rushing and sacked Troyer 5 times for -35 yards. The Eagles gained nearly 200 yards on the ground led by Knight with 79, Hohlman added 65, and Yancey tacked on 47 on his TD run.