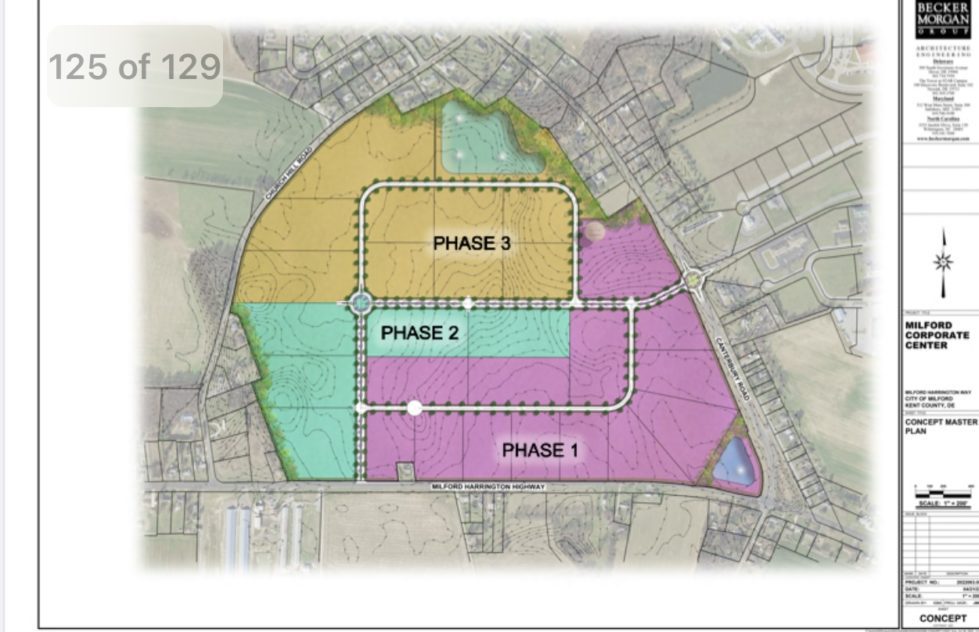 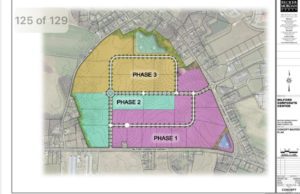 Phases of the Milford Corporate Center planned for the Fry Farm

At a recent meeting, Milford City Council reviewed plans for the new Milford Corporate Center which will be constructed on what was the Fry Farm. The city purchased the land at the corner of Milford Harrington Highway and Canterbury Road in 2021.

“Over the last couple months, we have started to put some concepts behind the business,” Mike Riemann of the Becker Morgan Group said. “This is before surveys have been done and what have you, but you can really see just how we have some design objectives that have come out of the planning. The planning is flexible and it supports both small and large users on the campus while taking advantage of the Route 15 corridor.” 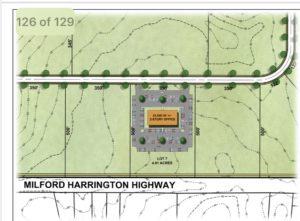 In addition to businesses, there will be public amenities including walking trails. There is a phased in approach to the project and there will be access to the park from both Milford Harrington Highway (Route 14) and Canterbury Road (Route 15). According to Ryman, the access on Canterbury Road is aligned with Airport Road and the plan indicated there would be a roundabout at the intersection of Canterbury Road and Airport Road, something that was conceived when the land was considered for a residential development a number of years ago. 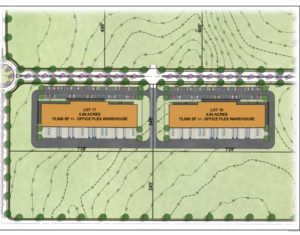 “So, we are anticipating that the thought process for the land is looking at a range of lot sizes. They range roughly from four acres to 12 acres, but they could be combined. The idea being that some of the parcels, depending on what type of tenant is interested,” Riemann said. “When you embark on these, you don’t necessarily know who that tenant might be or who that user might be. We do see a range of users in these campuses. We wanted to try to develop something where those lots can be combined. We did connect Route 15 over to Route 14 stormwater kind of to the plan north there. Based on GIS Topography, it does appear that the drainage pattern is in that direction. We have a drainage feature located at the corner of Route 15 and 14 because we think we could create a nice attractive accent to that major intersection there and in the business campus. And we are showing we did reserve a couple of acres for a water tower and wellsite.”

Riemann explained that the plan has smaller lots along Milford Harrington Highway which are about four to five acres. These would favor more office-type users which would enhance visibility in the complex. Larger lots are located in the center of a little over five acres, but any lots could be combined if a tenant wanted something larger. The largest parcels are in the back and are about 12 acres. There will not be an access to Church Hill Road as the planners did not see that as a benefit. Riemann also stated that they have seen cases where someone who needs 150,000 square feet of space may compliment another smaller company who may only need 25,000 square feet which builds flexibility into the plan. 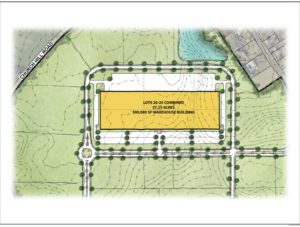 “We’re seeing range in the market,” Riemann said. “We’re seeing on the larger end 300,000 to 500,000 square foot ranges as the sweet spot for larger users. And then the 75,000 to 150,000 range for smaller users. Right now, we are working through the PLUS process. We’re scheduling meetings with DelDOT to start talk about access. We’ve done some things like counting traffic. We looked up old traffic studies that were done in this area. The good news is one of the off-site improvements indicated for this property, as part of the traffic study, is actually a DelDOT project that’s being implemented at 113 and 14. You’re probably aware of some additional lanes going in there. So, that’s a good thing. And then we’re starting to discuss the steps for public outreach.”

Mayor Archie Campbell pointed out that Canterbury Road was a very small road with only two lanes. Riemann explained that it was actually built to major collector standards even though it was only two lanes. There are eight foot shoulders and the lanes, although there are only two, are 12-feet in width which are DelDOT standards for a major collector. He stated that the same is true for Milford Harrington Highway so he wouldn’t anticipate a need to widen those roads. Councilman Jason James stated that his concern was larger trucks going in and out of the industrial park which may not be the same as passenger vehicles.

“We’re hearing about potential impact from concerned citizens,” Councilman James said. “At this point, we really need to work with DelDOT to ensure that we’re going to have sufficient shoulders, lanes, flow of traffic. I just want to make sure we’re all thinking about that. This is a good concept and I like how it looks, but we’ve got to keep Milford in mind.”

Riemann pointed out that the Fry Farm was originally proposed to be a residential development. When they looked at the traffic study for a residential development compared to building an industrial park, they found that there would be less total traffic with the new plan. Councilman Andy Fulton questioned whether users would be concerned about driving all the way through the park to get to the back side if that is where they are located since there will be no access from Church Hill Road. Councilman James stated that an industrial park attracts a certain type of client and that having to drive through the park to get to a building was often not a factor.

“You hit the nail on the head there,” Riemann said. “Those aren’t the type of users that are necessarily looking for highways.”

Whitfield pointed out that the other amenities included in the plan would also be beneficial for residents in the area. The walking trail around the outside of the property would be a buffer for those living near the property and they would be available for their use. In addition, employees in the park could walk on the trails during their lunch hour.