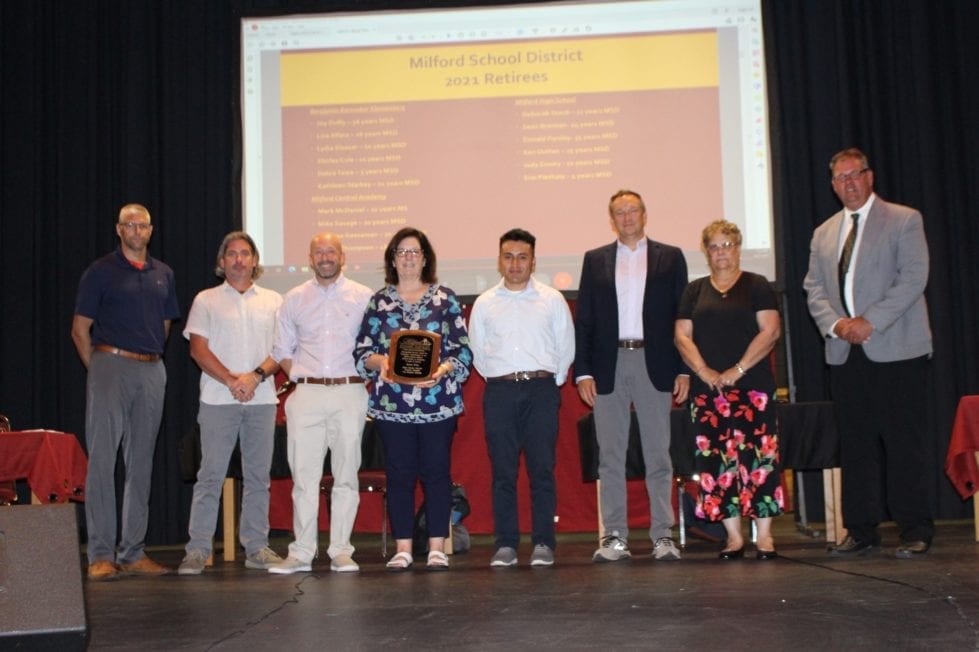 Milford School Board recognized Renate Wiley as she steps down after ten years serving on the board. Photo courtesy of Milford School District

“We would like to take this moment to recognize Renate Wiley for her dedication and service to Milford School District,” Dr. Kevin Dickerson, Superintendent, said. “She served as a board member here from 2011 to 2021, as vice-president from 2013 to 2015 and president from 2015 to 2020. She is a mother, grandmother, just obviously a community asset. We have been very fortunate to have her support in our district.”

Wiley accepted the award and thanked the district for the recognition.

“If any of you know me, you know I get choked up very easily, so I will try to get through this without getting choked up,” Wiley said. “I just want to say a few words, off the cuff, but from my heart. When I was a school nurse, it was the hardest job I ever did, but it was also the best job I ever did. And that is exactly how I feel about being on this school board. It has been hard work, but I am very proud of the work I have done.”

Wiley joked that her ten years on the school board was not a record by any means, pointing out that Marvin Schelhouse may hold that record.

“Over my ten-year history, I have worked with three superintendents,” Wiley said. “I was involved in the hiring of two of them and I think they were excellent choices. I think we are very blessed as a district to have the superintendent that we do. In that time, I have been involved with 20 different people who have served on this board, including the current board. And that is quite an honor. The most humbling thing I have and the greatest gift I was given was when this community voted me to be on the school board. I have been honored to serve these past ten years. I’ve been honored to serve with the members I have in the past and with my current members. I do know the one thing that has always rang true with all the members I have served with is that we have all come with the same belief. That is that this district, our students and staff were the most important and that we would do what we had to do even if it was not the best decision at the time or the most popular decision, it was what we felt was in the best interest of the district.”

Wiley promised her fellow board members that it was not goodbye as she planned to be around.

“I have five grandchildren in the district,” Wiley said. “I have a daughter who is a teacher and a granddaughter who wants to be a teacher and come back to this district, so I will be around to still support you with a referendum or anything that comes around. My heart and soul is with Milford School District and I know that I am leaving you in good hands with Dr. Brownstein as he comes on to take my seat.”