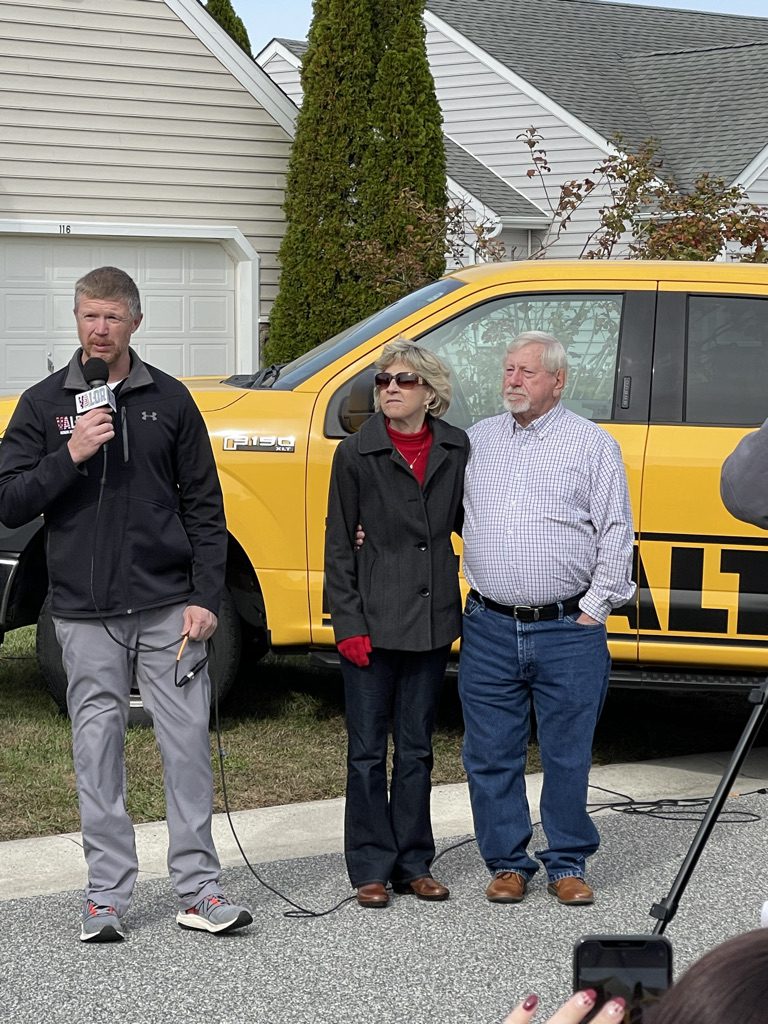 Former Master Sergeant Ed Holloway was surprised last week by Valor Homes who had just selected him to receive a new roof. The Valor Homes “Raise the Roof” program gives a new roof to deserving veterans. This was the 17th roof the company has given to veterans and the first in the state of Delaware.

“This is a way for Valor to give back,” Will Fisher, Program Director for Raise the Roof, said. “This is our first one in Delaware and our last Raise the Roof event. Hold on a minute. In 2022, we are becoming Operation Raise the Roof as we are going national. Before, we were mainly sponsored by Valor, but we are finishing up the process to become a 501(c) which will allow us to help more vets with a goal of helping one vet a month.”

Holloway, who has been married to his wife, Brenda, for 53 years, provided photographic support during the Vietnam War. The couple, who married in 1968, moved to California shortly after and moved several times in a short period of time after their marriage. They moved to Langley and then to Colorado as they grew their family. After leaving the Air Force, Holloway worked in photographic support at the White House, supporting Presidents Gerald Ford, Jimmy Carter and Ronald Reagan. When Reagan left office, Holloway retired, and the family moved to Milford.

“I’ve known Mr. Ed as I lovingly call him for about four years,” Josh Maddox, Executive Director for Veteran’s Affairs, said. “Mr. Ed is one of the most loving individuals I have ever met. He cares for everyone. He works in our office at the front desk of our Dover headquarters and his goal is always to make people smile. He is very quiet about his past. He is one of the most sympathetic people I have ever met, putting forth his best effort every day. He never stops giving and he has never asked for a thing. I could not think of a better person to receive this recognition.”

“My husband is a veteran of the United States Navy, so I greatly understand the sacrifices you and your family have made during your years in uniform,” Lt. Gov. Hall-Long wrote. “Any individual that honorably serves our country in the Armed Forces is outstanding and your career is remarkable. You have served as an inspiration to all who have met you, both in and out of uniform. It is an honor to know that Valor Homes will be providing assistance to someone who has, for years, placed integrity first, service before self and operated with excellence in all he does.”

Mayor Archie Campbell explained that he worked with Holloway on the Milford Planning and Zoning Commission which made the presentation special for him.

“We served on the Planning Commission together,” Mayor Campbell said. “Knowing him all these years, he is probably one of the best guys we have had in this community. He has always stepped up to serve and I thank you for that.”

Jennifer Jensen, Communication Officer with the Division of Veteran’s Affairs, who is also Holloway’s boss, read a letter from Senator Tom Carper.

“From serving as a Master Sergeant in the United States Air Force to working in the White House under not one, but three, presidential administrations, you have gone above and beyond in service to our country,” Senator Carper wrote. “Please accept my sincerest gratitude for what you have done and what you continue to do for Delaware and the nation.”

After reading the letter, the Master of Ceremonies, Gary Stein, asked Jensen if she was the one who arranged for Holloway to be home when Valor arrived to tell him he was getting a new roof. Until she spoke, Holloway had no idea who had nominated him for the new roof.

“I was the one who told Ed to go home and relax,” Jensen said. “I was the one who nominated him. There is nobody more deserving than Ed. The Office of Veteran’s Services is on a mission to bring more veteran organizations to the state because we are lacking in that area. Valor was one of the top three we found. Ed had been talking about having some hardships lately and I was thinking his roof might be pretty old. One day I just asked him. He said, ‘that’s a weird question, but yes, I do need a new roof.’ He is the most humble man. We can have the most angry vet walk in and I call him the bomb diffuser. He will literally make them walk out with a smile.”

After Diaz Bonville, representing Congresswoman Lisa Blunt Rochester, read a letter from her congratulating Holloway on his 20 years of service and his recognition for that service, Holloway thanked Valor and those in attendance for the recognition.

“It’s a marvelous privilege to be a recipient of what Valor Homes has done and are still doing,” Holloway said. “Any organization, any group that will reach out to our veterans deserves applause and recognition and I think them all so much. Our veterans give so much and in so many ways, they become forgotten or unappreciated. I love my country and will until the Lord takes me home and I just want to encourage everyone to give a hand and lift up and honor those who have served.”

When asked how it felt to be recognized for his service, Holloway stated that he was gratified but felt it was overwhelming.

“This whole thing from a knock on the door a week ago,” Holloway said. “I looked out and wondered who these people were. I knew it couldn’t be Publisher’s Clearing House because there were no balloons. Then, I saw Jennifer and Will stepped up. He announced that I was the recipient of a new roof, and I was shocked. God works in mysterious ways, and we give him credit for the way he has worked in our lives. Our daughter, Amy, is a special part of our family because when we lost children and she was unable to go through other opportunities, we decided to adopt. God sent us a very special person to be part of our family. Those blessings just keep coming.”

Fisher explained that the company delivered flyers throughout the neighborhood about the event and Holloway “hunted him down” to tell him the flyers were wrong.

“He told me he never made it to Vietnam,” Fisher said. “I said “yes, you did.” I asked him what he did in the Vietnam War. He was part of the SR71 program. For those who do not know what that was, these guys flew over Vietnam, took photos and took them back to the United States to get information to ground troops about where targets were. I said, “Ed, that’s Vietnam. If you were shot down, you were going to be in Vietnam or the ocean.” Even though Ed didn’t put boots on the ground in Vietnam, he kept other soldiers safe. Without him, a lot of those targets would not have gotten taken care of to bring our people home.”

State Representative Bryan Shupe also commended Holloway for his service, commenting that in a community like Milford, there are many retirees and people often are unaware of their past lives. He thanked Holloway for his service, not only to the country but also to the community he now calls home. Michael Tonar of DeWalt, who could not attend but sent a recording for Holloway, stated that he would be sending tools as a gift as part of the Raise the Roof package.

Jennifer Jensen informs Holloway she was the one who nominated him

“For Valor and for Operation Raise the Roof, we are extremely excited to be welcomed to Delaware,” Al Kincaid, Co-Founder of Valor Homes, said. “We just opened a new office here and we look forward to being here for many, many years. We look forward to doing a lot more roofs. We ask people, if you have a veteran on your street, mow his lawn for him. Just do it. Don’t ask or even say you are doing it. Just do it for those who have done a lot for you that you may not even realize. I am a Vietnam veteran, and I did have boots on the ground. You have to realize that it takes four people in the rear to support one man on the ground. If you weren’t on the ground, it didn’t matter. If it wasn’t for you, we could not have done what we did, right or wrong. There is a little plaque that you see around that has become a poster. It says, ‘Superheroes don’t wear capes; they wear dog tags.’ Keep that in mind.”

The Holloway family was presented with a handmade wooden flag created by Flags of Valor, a veteran-owned company. All flags are created by veterans and the back is signed by one of the team who creates the flags along with the branch of service they were in. The ceremony ended with the singing of the National Anthem and lunch which was provided by Mission Barbecue.

For more information about Operation Raise the Roof, visit https://valorhome.com/giving-back/raise-the-roof/.