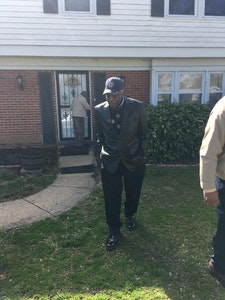 Award-winning duck carver, Doug Gibson, celebrated his 98th birthday on February 28. Gibson has received many awards for his duck carvings, including Ducks Unlimited Carver of the Year and an invitation to the Smithsonian Institute’s Arts and Crafts Festival in Washington DC in 2003. At this event, Gibson demonstrated his methodology as well as his technique and was featured on a German TV news show.

Gibson was born in 1923 in Trappe, Maryland, the ninth of ten children. He spent his childhood on a farm and decided very early in life that he was going to find a way to get off the farm and own his own home. He attended school in Trappe until eighth grade and, upon graduating, walked to Easton to attend high school, a trip that today would take over three hours one way. After graduation from high school, he briefly attended Princess Anne Academy, now known as University of Maryland Eastern Shore.

At 19, Gibson enlisted in the Navy during World War II and served four years at Pearl Harbor where he attained the rank of Petty Officer Second Class. While attending Del State, he began working at the Tred Avon Yacht Club in Oxford, Maryland, and was eventually asked to run the Club’s food commission, a job he performed for more than ten years. He then attended what is now Delaware State College, one of a group of African-Americans that kept the college from closing. It was at the college he met his future wife.

After graduating from Delaware State, Gibson attended the University of Delaware, one of four African Americans to attend the University. The four faced opposition from others who did not want them there, but Gibson persevered and earned his master’s degree. Gibson taught at Benjamin Banneker Elementary School in Milford during segregation. When schools were desegregated, Gibson taught for two years at Milford Junior High School. In 1968, he was recruited to teach at the newly formed Delaware Technical and Community College where he taught Architectural Engineering until he retired in 1988.

Gibson first took architecture while attending the University of Hawaii while in the navy. He also took a class at Delaware State where, for a class project, he had to design a home. The blueprints he created for that project became the basis of the brick home he built in Milford from 1960 to 1961. As a child, he watched his father carve duck decoys with a pocket knife and hatchet. In the 70s, he decided to try his hand at carving.

“He found he enjoyed it and it became a passion for him,” his son, Darrald Gibson, said. “Only his family is aware of the time he spent studying about ducks in books and life specimens. He even acquired a license to raise mallard ducks from the State of Delaware. He has seen the passing of his youngest son, his daughter and his wife of 52 years. He is the oldest surviving member of his family. His father lived to be 98 and his grandfather 105.”

Gibson recalls riding to town on a horse and buggy because cars were only for the rich. He also recalls telephones were party lines and music could be heard on 45 rpm records. Radios were the primary means of home entertainment when he grew up and he did not buy his first television until the late 1950s. His son recalls the first time his father brought home a color television and what an amazing thing that was.

“This just scratches the surface of what my father has accomplished in his life,” Darrald said. “Earlier this year, he asked why they wanted to do a documentary of his life. I told him it was because of how unique a life he lived and how many different things he had done with his life. His response was ‘Huh, I never looked at it that way. I just thought it was another interesting thing I hadn’t done before.’”