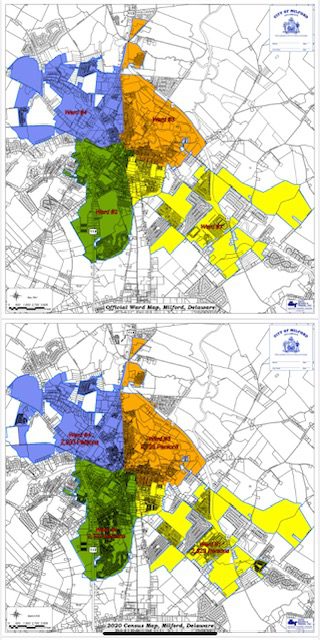 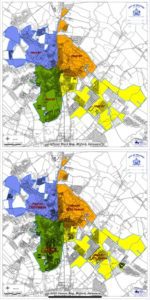 Milford City Council heard from the president of Davis, Bowen & Friedel, Ring Lardner, regarding plans to redistrict the wards throughout the town. DBF assisted with the plan at the request of City Council and Mayor Archie Campbell to be sure that the city was meeting requirements under code. Lardner presented a map with new ward lines drawn and explained that code required each ward to be as equal in population number as possible. Due to growth in some wards, the population in each had become off balance.

“In 2020, the population of Milford was 11,204. Where the charter is written, the four wards are supposed to be as close as possible in number and that number equals 2,801, and your lowest ward has to be within 10 percent of the other wards. So, when we review that number, we found that the ward maps from 2010 no longer met that requirement. So, we had to look at redistricting. The next part of that process is the border just had to be contiguous. So, because there’s the gap between Ward 1 and Ward 2, we kind of looked at the center part of the city. And so, with the proposed ward maps of Ward 1, we would end up at 2823, Ward 2 at 2727, Ward 3 at 2425 and Ward 4 at 2,933.”

Lardner explained that they decided to leave Ward 4 with a slightly higher population as it still fell in the 10 percent requirement and because there were predictions that Ward 4 would not grow as quickly as the other wards over the next ten years, especially with the Fry Farm becoming part of the city as an industrial park. Winward on the River and other proposed developments would grow Ward 3 while Ward 1 still had potential for growth with Hearthstone and other areas. The most growth would occur in Ward 2 over the next decade with Simpson Crossing, Cypress Hall, Milford Ponds and more. For this reason, the plan lowered the population in Ward 2 significantly to allow for growth and so the city would not have to redistrict again before 2030.

“It matters because elected lines are going to be affected,” Councilman Jason James said. “But this also follows natural boundaries of roads instead of being cut through which can be confusing.”

Lardner explained that this was the fourth iteration of the map and that the planners used the four variances to shift lines and streets. What they found was the plan presented to council seemed to create the best shift and balance each ward. It also demonstrated that using streets as dividing lines worked better than using property lines.

“So, the only thing has to happen is the ordinance would have to be approved within six months of the next general election. So, we still have time and then the maps and legal descriptions just have to be advertised in the paper one month before the election. There’s also sponsored Council Review of the maps.”

City solicitor David Rutt stated that the redistricting had to be advertised and must go through the ordinance process with public hearings. He also stated that the announcement had to be advertised in two papers with wide distribution in the area, something that could be difficult. The advertisement must not only include maps but also a written description of the new boundaries. The deadline for approval of the redistricting would be October 22 since the next election is scheduled for April 22. Councilman Michael Boyle pointed out that some of the street names in the developments on the preliminary map were incorrect and Lardner stated that those would be corrected in the final version. City Clerk Terri Hudson requested that a September 1 deadline be established so there was enough time to notify residents of the changes.

“I do want to thank Davis, Bowen & Friedel for their help with this,” Hudson said. “They have been very helpful with something that is already difficult with different maps. As he said, this, well actually, this is the fifth map, so now it will be easy for us and our engineering department when it comes to redistricting and for our voters.”