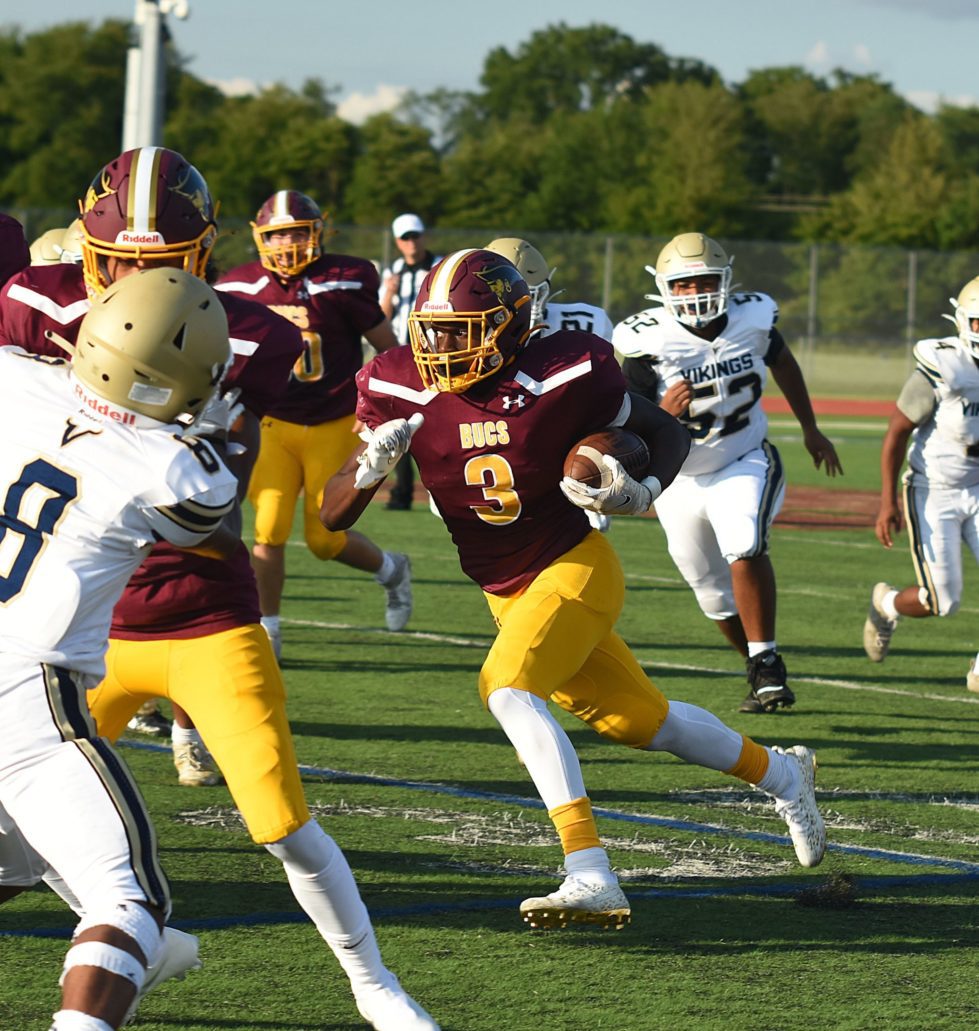 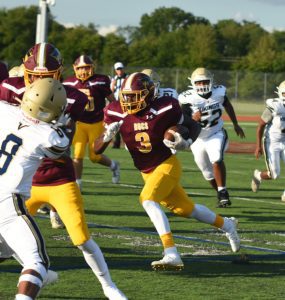 All of the sudden it wasn’t a laugher anymore. What had been a comfortable 28-0 lead was halved in just a matter of minutes, with plenty of time left in the fourth quarter. Milford had 8:22 seconds left and would rely on the two strengths it had all day ­- senior running back Aaron Sivels and its defense. First on the menu would be Sivels.

Starting the ensuing drive on their own 18-yard line, the Buccaneers plan was simple – run with Sivels until they stop him. It was no contest as Sivels would cover the 82 yards against the Cambridge-South Dorchester Vikings in just three plays. Sivels capping the drive with his fourth touchdown of the game with a run from 40 yards out, from what had proven to be a soft left-side of the Vikings defense. The run would put to rest any hopes of a comeback for Cambridge-South, as the Milford defense would shut them down the rest of the game as MHS would come away with a 34-14 season-opening victory at Briggs Stadium. “I wanted the ball in that spot, I always want the ball when the game is on the line,” said Sivels, who had 260 rushing yards and four TDs on the day, who gave a huge deal of credit to the blocking he received all game long. “The line was fantastic tonight, but it wasn’t just them, everyone was making their blocks, especially the receivers. You don’t run for over 40 yards on a couple of plays unless everyone is doing their job.”

The game started nicely for Milford, as on the game’s first play as it took a counter from its 35 to midfield. On the next play, Sivels had another big run going, before having the ball stripped from him after 20 yards, turning the ball over to the visiting Vikings. “At first, I was a little down on myself, but so many players and coaches came up to me after the play, I knew I was going to have a big day, because my team was behind me. Everyone who said something to me basically said the same thing ‘We know that isn’t you, you’re going to win this game for us. Just forget about it,’” he said.

While Sivels may have been the one scoring, the Milford offensive and defensive fronts were the players making a statement in the trenches. Milford has some questions upfront this season, with senior Aydin Zimmerman and junior Desmond Aladuge expected to anchor an otherwise inexperienced line. Both were up to the task, as they harassed Viking runners and quarterbacks all day. While there is still work to be done up front, Buccaneers coach Shaun Strickland liked what he saw Friday night. “We were pretty good up front against what I thought was a pretty good team. Our guys put a lot of pressure on them, and we really benefited from it.”

After Sivels had scored his second touchdown of the game with 1:44 remaining in the first half, it looked as if Milford would take a 14-0 lead into the locker room. The Bucs defense however, had other plans. Aladuge would get his fifth sack and force his second fumble of the game with just over 40 seconds remaining in the half. Milford junior Ke’Shawn White scooped up the ball around the Cambridge-South 40-yard line and ran it all the way to the Vikings’ three-yard line, where Sivels would punch it in with 30 seconds remaining in the half as Milford extended its lead to 21-0. “We were really getting good pressure up front; everyone was penetrating it just worked out that I got the sacks,” Alduge added. “We felt very strong up-front tonight and really worked well as a team.”

Starting the second half, a blown coverage on pass defense by the Bucs would allow the Vikings to set up shop at the Milford 13-yard line with just 30 seconds gone. The defense would respond, pushing the Vikings back and forcing a four and out. The teams traded possessions for most of the third quarter, until Milford senior quarterback Shawn Saxon started to heat up. After a first half with three near misses, once Saxon got going, he stayed hot. The game’s biggest pass came on a 30-yard connection with junior Aaron Kravitz for a touchdown in the left-hand corner of the end zone, with the third quarter coming to a close. “We were kind of unlucky in the passing game during the first half, we had three plays that were really close to being touchdowns. Shawn and the rest of the receivers knew that the plays would come for them eventually and they did,” Strickland said.

After the touchdown, Milford would give up two quick touchdowns before settling down. While not pleased with the plays, Strickland was pleased with how the Buccaneers responded. “Look, it’s the first game of the season and you know that some players are going to make mistakes. The good news is, we got the win and can learn off of our mistakes. Also, when you take a look at a guy like Sivels, who has been the ultimate team player, never complaining about not getting the ball. This year, we have put a huge weight on his shoulders as our lead back, and the way he played tonight (Friday) is a credit to him. When we needed him most, he was there for us.”

Next week Milford will travel to Glen Burnie, MD to face off against North County High School. The game is scheduled for a 6:30 start.