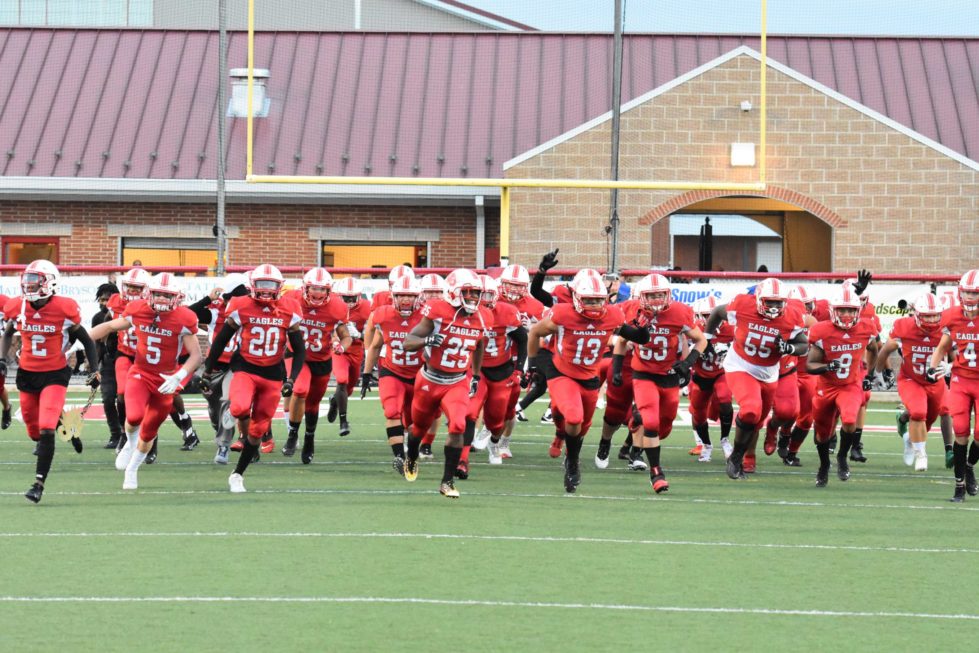 Lewes – The Smyrna Eagles traveled to Cape Henlopen High School last night in the regular season finale to finish the Class AAA District 2 unbeaten and leave no doubt they were the best team in the district.

When the game was over they had achieved both, Smyrna was officially crowned District 2 champions in their 54-8 victory over the Cape Henlopen Vikings.

“Wayne is an unbelievable back, he is a fantastic human being and the type of guy you can’t replace,” Smyrna head coach Mike Judy said.

Smyrna wasted no time getting started as on the first play of the game Cameron Edge connected with Denim Smith on a short screen pass and Smith did the rest racing 65 yards for a touchdown. Wayne Knight converted the P.A.T. run giving Smyrna an 8-0 lead just 19 seconds into the game.

With Cape Henlopen facing the number 2 team in the state and giving up an early score and did not blink. On their fourth play in the ensuing drive Keishawn Mansfield took the ball on an inside reverse off left tackle and then weaved back to the right sideline for a spectacular run of his own and a 66 yard touchdown. Joe Coveleski rolled left and found Ethan Felker in the front corner of the endzone. Felker made an acrobatic catch for the conversion pass. With 9:00 to play in the first quarter the game was tied up at 8-8.

Mixing the passing attack of Edge and the running of Knight Smyrna engineered a 6 play 59 yard scoring drive capped off by one yard run by Knight. Knight scored on the conversion run and Smyrna led 16-8 midway through the first quarter.

It would be all Smyrna at that point as the Eagles defense held Cape Henlopen to just one first down for the rest of the first forcing two punts and an interception by Isaac Stewart to end the first half.

Knight would score the next four touchdowns for Smyrna on runs of 1, 19, 55 and 15 yards. He also caught a pass for 55 yards, scored on a conversion run and threw successfully for another. Knight ended his evening with 114 rushing yards on 8 carries and 169 all purpose yards while scoring 48 of the Eagles 54 points.

“That’s Wayne, I remember the first time we played together as kids he took the inside handoff and went like 99 yards for a touchdown,” Edge said of Knight.

“The process is going to stay steady, remain the same week in and week out, practice hard and keep pushing,” Knight said.

Smyrna improved to 8-2 overall and 5-0 in District 2 and will receive a bye in the first round of the DIAA Class AAA state tournament. The tournament field will be announced on Sunday.

“This is what you work for all season, that second season where it’s win or go home,” Judy said.

Mansfield rushed for 92 yards on 5 carries and the Vikings lone touchdown. Cape Henlopen fell to 1-9 overall and 1-4 in District 3. The Vikings will go on the road for the first round of the playoffs against a yet to be determined opponent.