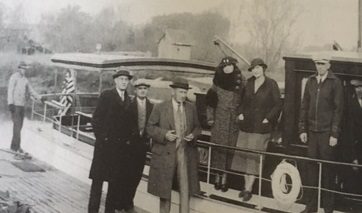 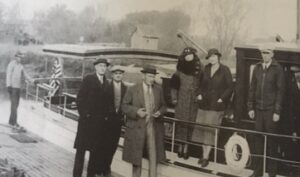 Join several Milford Historians on a guided tour of South Milford on Saturday, September 10. The tour begins at the Milford Museum where the walk starts promptly at 9 AM. The tour will cover some of the fascinating history of Milford, including the thriving shipyard industry of the late 1800s, some of the beautiful historic homes in the area as well as a visit to the Causey Mansion gardens.

“We did a walking tour of North Milford in May, and we sold out of tickets, it was so popular,” Nicole Rogers, Museum Operations Manager said. “We think this one will be just as popular, and we are encouraging people to buy tickets early. We have added microphones for our guides so they can be heard over any traffic or road noise.”

One of the areas that will be viewed is the Vinyard Shipyard, the location where Wilson Vinyard and his crews built more than 150 ships from the late 1800s through the 1950s. This shipyard is the last remaining shipyard in Milford and has been restored by Joan and Sudler Lofland.

“The history of the shipyard is fascinating,” Rogers said. “When wooden boats began to be replaced with steel, Wilson Vinyard was able to adjust his business so he could continue operating. When large boats could no longer be built there, he began building customized yachts. Then, during World War I and II, the shipyard built sub chasers through a contract with the United States Navy. After the war, the shipyard constructed “rum runners” for the United States Coast Guard which were used during prohibition.”

There is an effort today to preserve the shipyard and convert it to the Delaware Museum of Maritime Life. The tour will also view some of the businesses that thrived on South Walnut and Southeast Front Street. Attendees will also learn more about the architecture and the people who lived in some of the oldest homes in south Milford.

Tickets are $10 per person. It is recommended that anyone attending wear comfortable walking shoes and a hat. A bottle of water is also recommended. All proceeds from the tour will go to the mission of the Milford Museum. Tickets are limited to 20 people and they are expected to go quickly. Purchase tickets at https://milforddemuseum.networkforgood.com/events/45927-south-milford-walking-tour?fbclid=IwAR0KkblEH90fmdl7zf2_CinTkZGfytr81suJRwfmI-agFJmAecbDk3m22jk.