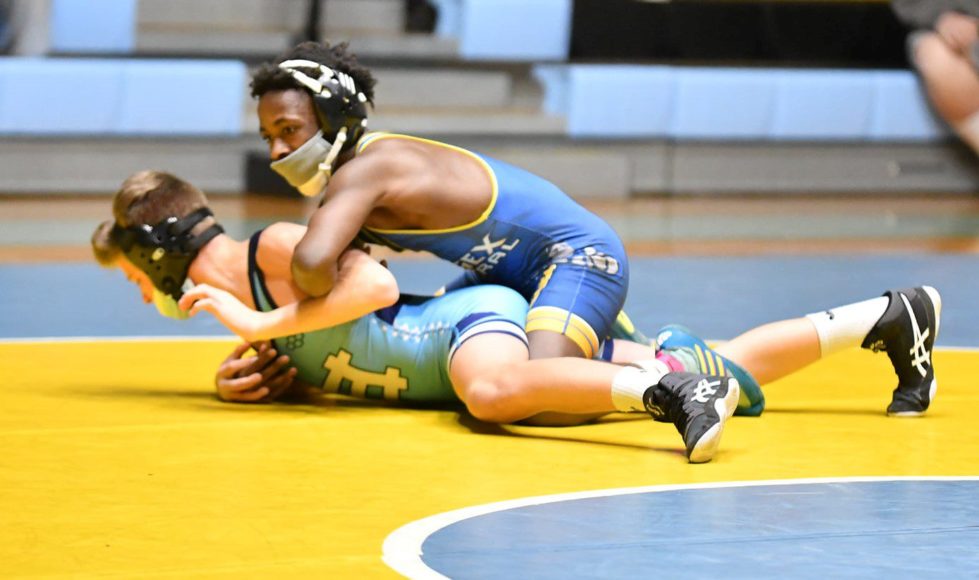 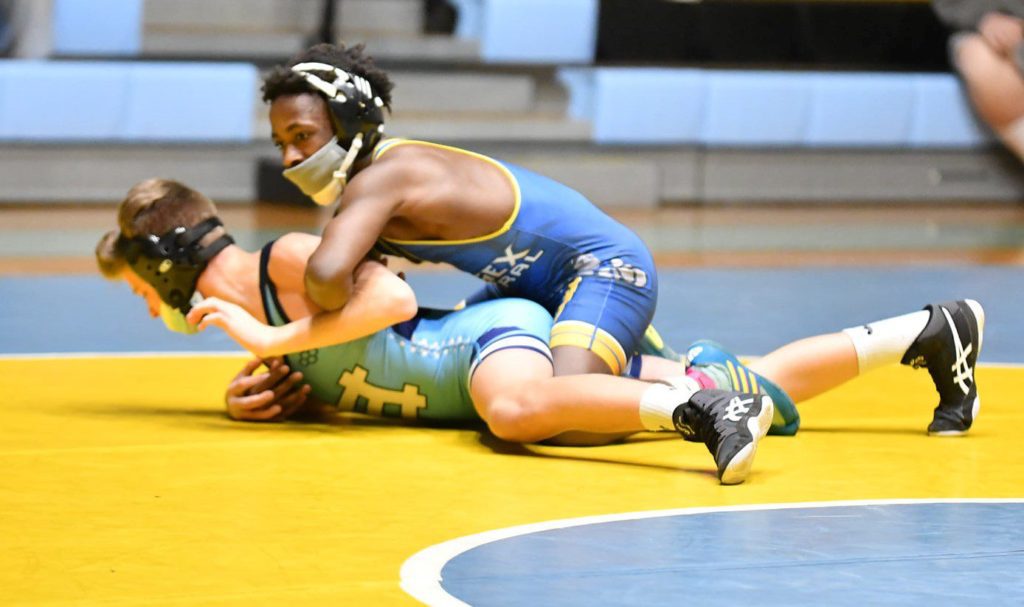 Lewes – 2022 has been an unpredictable year in high school wrestling. Teams juggling lineups between injuries and Covid has made for coaches having to move wrestlers around to fill their lineup.

Unranked Sussex Central came into their match 5-5 with Cape Henlopen at 7-1. The Golden Knights won eight bouts including three pins to upset the top ranked Vikings 34-31.

“This win is big, I have been telling the guys all year we are going to be there at the end. Just keep working to improve and compete in the room everday,” Sussex Central head coach Shane Miller said.

With the match starting at 170 pounds Cape Henlopen jumped out to a 5-0 lead with Carson Kammerer’s 22-7 technical fall over Ivan Neal.

The Golden Knights responded with back to back victories as Miller flipped two of his top wrestlers sending Gabe Cannon out at 182 pounds where he pinned Jack Wiggins in 34 seconds. Defending state champion Josh Negron bumped up to 195 pounds where he won a 13-3 major decision over Alex Taylor and Sussex Central took a 10-5 lead.

Dalton Deevey put the Vikings back out in front with his pin over Ryder Robinson in 3:33, but Michael Harmon answered with a  6-3 decision over Sean Costello as the Golden Knights took a 13-11 lead.

As the match rolled around to the lightweights Cape Henlopen headed into the jaws of the Sussex Central lineup.

Top ranked 106 pounder Malachi Stratton recorded a pin over Jacob Goodsell in 1:44 followed by a pin by Chase Murray over Max Meadows in 3:39 at 113 pounds.

Cape Henlopen’s Josh Wright ended the drought for the Vikings with a pin in 3:06 over Justin Craig at 126 pounds.

Josh Alveres  moved up to 132 pounds for the Vikings as he has done for most of the season where he faced Evan Broomall in a pivotal match of the dual meet.

Alveres used a takedown and a reversal to build a 4-2 lead after two periods, but Broomall scored a reversal and backpoints in the final 30 seconds of the match to prevail with a 7-4 decision.

“I was ready, had some lazy hips out there, but I got out there and it was a war,” Broomall said.

“Evan is a dog, he goes out and competes with everyone, he doesn’t care and just goes out and wrestles and doesn’t look at the name,” Miller said.

With Sussex Central leading 31-17 available points were at a premium for Cape Henlopen and they faced having to win the final four bouts of the night to survive an upset attempt.

Andrew Schaen won an 8-5 decision over Gunnar Abbott at 138 pounds followed by Mikey Frederick’s pin over Justin Negron in 3:23 at 145 pounds as the Vikings cut the lead to 31-26.

Caden Cope then sealed the match for Sussex Central with a 4-0 decision over Jayden Johnson to give the Golden Knights a 34-26 lead.

Sussex Central improved to 6-5 on the season and 2-2 in the Henlopen North. The Golden Knights will host Smyrna on Friday night in a key Henlopen Conference match.

Cape Henlopen fell to 7-2 overall and 4-1 in the conference and will travel to Laurel on Friday night followed by a Saturday match home against Dover. 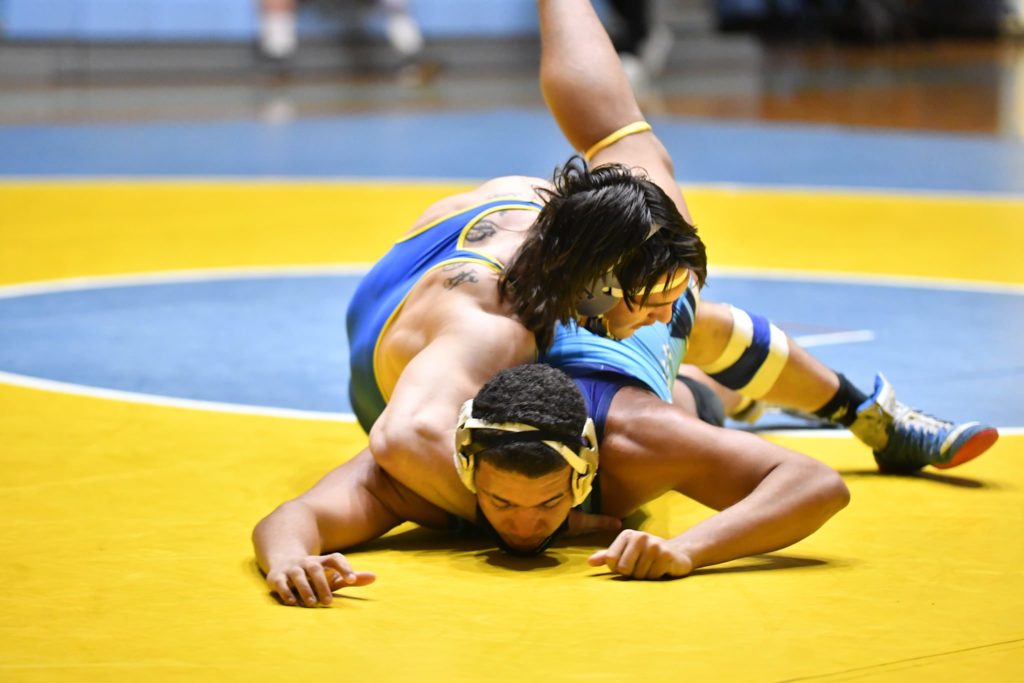 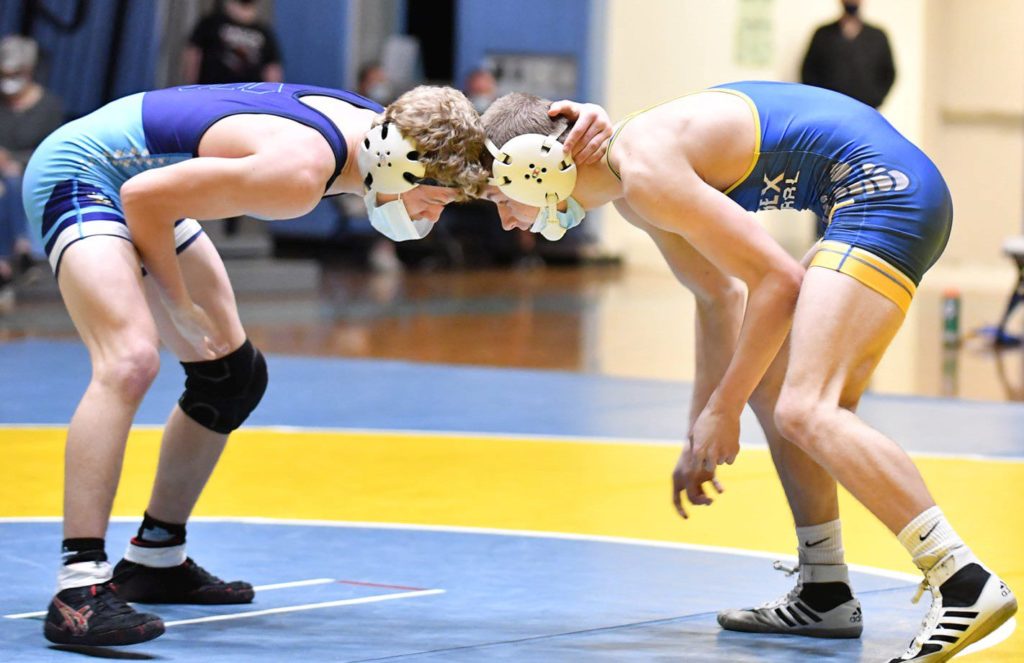 Andrew Schaen of Cape Henlopen (left) and Gunnar Abbott of Sussex Central tie up in the 138 pound match on Wednesday night. Schaen won an 8-5 decision. Photo by Dave Frederick