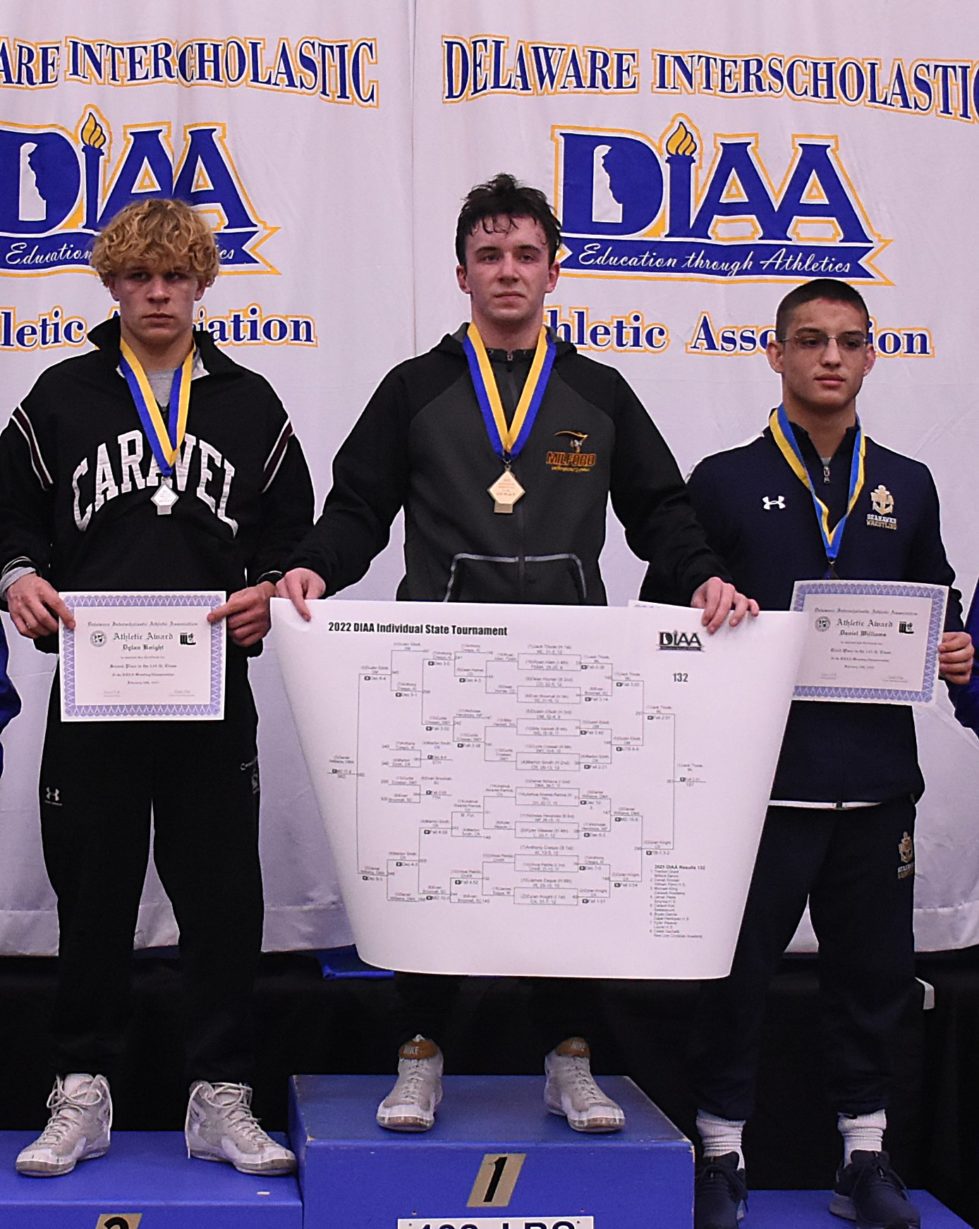 Milford senior Jack Thode was about to take the mat for his final match as a high school wrestler. It was the 132-pound title match for the Delaware Individual Wrestling Championships. While Thode already had earned two titles previously, this one was surprisingly special to him. “Once the match begins, you pretty much put everything out of your mind and that is what I did. But between matches this weekend, I had a lot of time to think about all the people who helped get me to this moment. My family, coaches, friends and so many people in the wrestling community were always there to lend a hand.”

Thode would be battling Dylan Knight, who had Thode defeated by decision in last year’s title match. “I know Dylan pretty well and he is a tremendous wrestler, but I have been really focused and very healthy this year – I was very confident headed into the match,” Thode said. It was soon evident that Thode was not overconfident as he took a 4-0 lead in the first period, then with a workman-like effort, Thode moved in for the kill and won by pin at the 2:51 mark of the match.

Thode, who has always been a leader, actually explained that with all the injuries and adversary the squad had faced this year, it was great to have guys like Averi Copes, Aaron Briscoe and Tim O’Hara step up and take a more active role in leadership. While there was one Milford wrestler, who did not qualify for states due to injury, Jack’s sister Emily, he was grateful to have her in his corner. “Without a doubt I think she would have been able to qualify this year, but fate wouldn’t allow it. I feel horrible for her, because I know how much it meant to her, and I would have loved to have her here. But I know that this will drive her even harder next year and I am really looking forward to it,” Thode said.

Speaking with Milford coach Don Parsley about Jack Thode, he was very happy for him. “Like every wrestler, he understands he has to put in the work to get results. He has been a leader on this team from the first day he stepped on the mat, I am really going to miss coaching him.” Thode plans to continue wrestling in college and study business.

In all, Milford would have four wrestlers reach the finals, with only Thode able to gain the gold. However, that does not in the slightest diminish the accomplishments of those who finish second. In all three cases, Milford wrestlers fought with enormous heart, in two cases, through physical injury which would have kept most wrestlers out of competition.

Trevor Copes (120) would fall by pin just 59 seconds into his match to four-time state champion Gabe Giampietro of Smyrna. With Trevor battling a bruised arm, it was not really a fair fight. Giampietro, who was voted the tournament’s outstanding wrestler, is probably the best wrestler in Delaware. “Nobody likes to lose; you work all year and to come up short hurts, I can’t lie to you. But as the coach told me, I lost to an absolute beast so there is nothing for me to hang my head about. The only thing I can do is come back stronger next year,” Trevor Copes said.

The best match for a Milford wrestler not to win was turned in by senior Aaron Briscoe in the 138-pound final. While he was down early to Daniel Sinclair of William Penn, 4-1. Briscoe worked his way back to 4-2, needing just a takedown to square the match for a possible overtime. Briscoe was on the attack from the match’s midway point on, but to Sinclair’s credit, he was able to narrowly avoid two close calls to claim the victory. “I had a couple of really good chances, but he was able to escape. You really have to give Daniel credit, because there aren’t too many wrestlers who I don’t get two points on in those situations. The one thing I know is I left it all on the mat and that is all I ever ask of myself,” Briscoe said.

While Briscoe may have enjoyed the closest match, the match that turned out to be truly inspiring was turned in by junior Averi Copes at 152 pounds. Having wrestled through conferences and states in what is a fractured arm, he would fall to John Antonio of Caravel Academy, 5-1. Speaking with Averi following the award ceremony, I was amazed as he removed layer after layer of equipment and tape. I asked him how bad it hurt, and Averi was blunt. “It hurts a lot. But that wasn’t going to keep me from competing and I won’t use it as an excuse either,” he concluded.

Finishing out the medals for Milford was O’Hara, a senior, who finished out his career winning his third-place match at 160 pounds. “While I much rather would have been wrestling for a title, but you wrestle the match that you have in front of you, so that is what I did.” O’Hara would earn a 5-4 victory to cash in Milford’s fifth medal for the tournament.

Speaking with Parsley after the tournament, he was extremely proud of how his wrestlers had performed. “Listen, every wrestler is beat up this time of year. But our guys got really unlucky with the timing and the severity of the injuries. When you take a look at what Averi did over the past two weeks, between conferences and states, you can’t help but admire him. The truth is however, all my guys showed heart, I could not be prouder of them. This has been a very trying season and in true Buccaneer fashion they refused to quit,” he said.