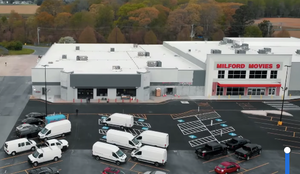 David Vargas, Campus Pastor for United Church, is excited to see the church begin holding experiences in their new location starting on Mother’s Day. The church has rented space next to Milford Movies 9, owned by Arthur Helmick, and the interior has been completely remodeled to suit the needs of the church.

“The interior has been completely redesigned,” Vargas said. “There is no way you will walk in and think it used to be a Walmart. There is an open lobby area when you enter that is open all the way to the deck. There is an auditorium for worship and our message with seating for around 550. We do have spaces for kids and for the other things we do.”

Vargas explained that UNITED was holding experiences at Milford High School and in Dover. However, when the COVID-19 pandemic began, they were unable to use the high school in Milford. They were closed completely for several months as all churches were in 2020 but streamed their experiences online. The Dover location opened last year, but they were still unable to open in Milford.

“In the fall of 2018, we first looked at the former Walmart building in its entirety,” Vargas said. “It did not work out for us then and the building was purchased for a new movie theater. Through networking and connections, our Lead Pastor, Kenneth Wagner, was put in contact with Art and the conversations went from there.”

Because UNITED holds services at 9:00 and 11:00 AM on Sunday, they will not interfere with movie traffic which does not begin until around 1:00 PM. Vargas stated that Helmick has provided a tremendous amount of support for the church, often watching their experiences online.

“The reception here has been fantastic,” Vargas said. “We were in Milford previously and our desire was not to stay gone. People were coming to our experiences in Dover from Milford and now that we have a permanent location here, we hope to serve the town even better.”

UNITED provides many programs throughout the city, giving away coats through Code Purple, packing boxes at the Food Bank, providing assistance to Bayhealth and offering help to the Home of the Brave. During the pandemic closures, those programs continued through UNITED, and Vargas believes they will be able to offer even more community support with a permanent location.

Vargas explained that he was a “military brat,” moving all up and down the East coast as his father spent 20 years in the Army. He accepted a position as head of recruitment at Mountaire Farms when he began attending experiences at UNITED. It was there he felt God’s call and has been serving UNITED full time for three-and-a-half years.

“All are welcome to attend our experiences each Sunday,” Vargas said. “Although May 9th will be our official opening, we do hope to have a ribbon cutting later in the month to celebrate the location.”

UNITED is located at 948 North Dupont Boulevard in Milford in the same building as the movie theater.