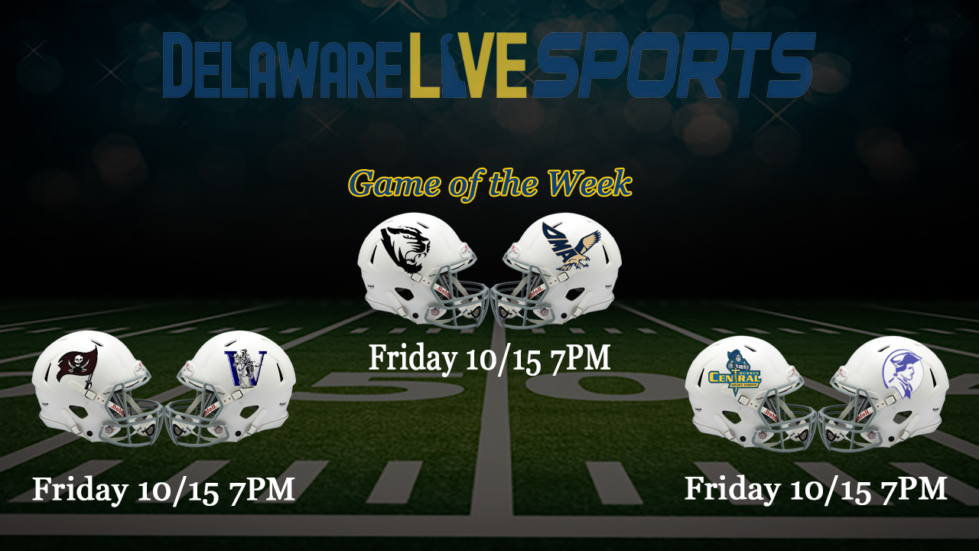 Sussex Central travels up to Dover for a 3A matchup Friday night. Central comes into this game with a 3-2 record. Last week they defeated Milford from 2A 31-7 in their homecoming game. Their other two wins have come over William Penn & Hodgson. Their losses came at the hands of Salesianum & Smyrna. Dover is 4-2 under new head coach Chip Knapp, formerly Wesley football head coach. Before last week’s loss at Appoquinimink Dover had won 4 straight games which included a big win over ST George’s. They will look to get back in the win column Friday night which happens to be their homecoming game. Last year Central defeated Dover 34-0.

Another battle of the unbeatens in this 2A battle. Caravel is 4-0 on the season with wins over Glasgow, Sussex Tech, Red Lion and Concord. All good wins, but none of their opponents have a winning record. Woodbridge will be their first true test of the season. Woodbridge is 5-0 and has played a few strong teams in St Marks and 1A Laurel. Woodbridge will face its second undefeated opponent in back to back weeks. Woodbridge defeated Caravel 26-7 last season.

This matchup of two 2A top 5 ranked teams is our game of the week sponsored by First State Orthopedics. Howard will visit an undefeated DMA team. Howard 4-1 suffered its only loss to #1 ranked 2A Archmere back in week 3. Since then they have won 2 straight. DMA is undefeated at 5-0 and hasn’t had a real test yet. They have dominated all their opponents thus far. However none of their opponents have a winning record. This will be their first true test this season.

A 9-1 Newark Charter visits a 7-2 Padua team. Newark Charter will host a good DMA team today so they could better their record before their match with Padua. However both teams have losses to #1 St Marks. Padua won 4 straight matches after their loss to St Marks, before taking their second loss on the season to Wilmington Charter. They have since returned to the win column with a win over Caravel. This will be a big matchup of two ranked teams.