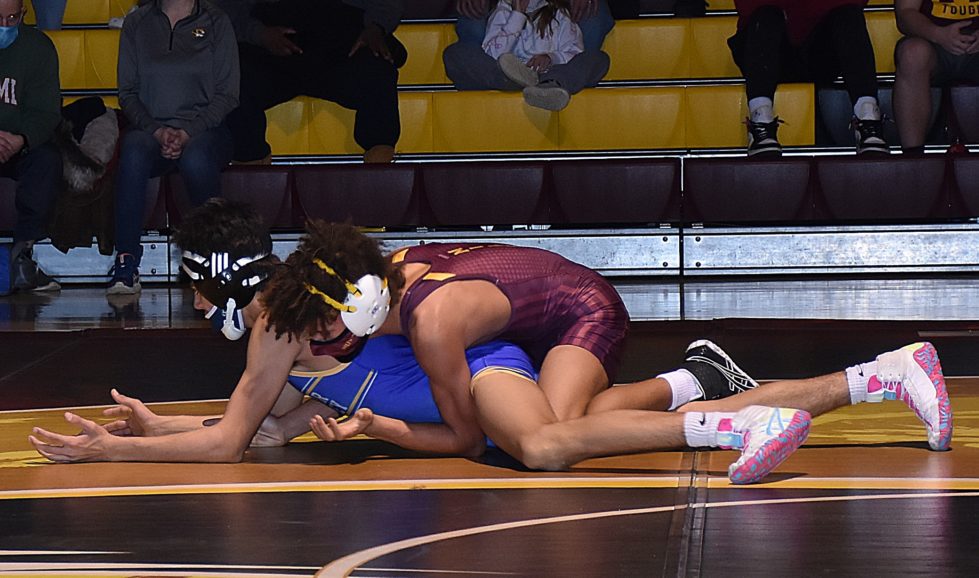 Last Wednesday, Milford and Caesar Rodney competed in what was expected to be a close wrestling match. The annual battle between the Bucs and Riders is always highly anticipated, due to the familiarity between the two programs. Former Milford coach Dan Rigby is now at the helm for Caesar Rodney, but more importantly, given the geographic proximity between the two schools, most of the wrestlers have known each other for most of their lives. While wrestling is a close and friendly community, when it comes to being on the mat it is all about winning. Unfortunately for Milford, it would come out on the wrong end of a 43-28 score. “Obviously, this was not the result we were looking for, but you have to give them [C.R.] credit. They came in here tonight and took care of business, they were very focused and got the win,” Milford coach Don Parsley said.

The meet started out well for Milford as junior Ryan Mejia won by fall at 152 pounds. That was quickly followed by a 7-0 decision win by fellow junior Averi Copes. From there, the momentum of the match would turn rapidly as Caesar Rodney flexed its muscle in the upper weights. The Riders would reel off five consecutive wins by fall, another by technical fall before Milford junior Vincent Jenkins stopped the bleeding with a win by fall at 113. The damage had been done however, and there was no way that Milford would be able to come back. “We have younger guys at our upper weights, they aren’t bad wrestlers, they are just inexperienced. I can say that they are getting better with every practice and every match, like anything else, it is a process,” Parsley said.

The loss was the second consecutive defeat for the Buccaneers, having lost a heartbreaker at second-ranked Smyrna by a single point. It was a meet that came down to the final match, which Milford would lose at 285 pounds. It was a good sign for Milford however, demonstrating that when it is at its best, it can compete with the top teams in Delaware. With Sussex Tech and currently undefeated Cape Henlopen coming to Milford over the next two Wednesday evenings (7 p.m.), Parsley is hoping to get the Bucs back on the winning track. “As we are getting closer to the end of the season, it’s about preparing for the State Duals, Conference Championship and state individual meets. We just have to keep working hard and we should be ready. This is the part of the season where it really begins to show who has heart and I know that our team has it. As long as we do our best, we should be fine,” Parsley said.

As for qualifying for the state tournament, a win this Wednesday over Sussex Tech should guarantee Milford a spot in the field. The seeding however will be open, and Milford will likely end up facing a tough opponent if it is seeded fourth or fifth. A win over Cape, would go a long way to raising Milford’s seeding, but right now that may be a tough ask for the Buccaneers. “We can’t worry about seeding or anything like that, we just have to worry about our next opponent, Sussex Tech. If we lose to them, we probably won’t even be in the tournament, so it’s like I constantly say, one step at a time. Just keep your focus on your next opponent and don’t look beyond that. If we remain focused, we should be fine,” Parsley said.