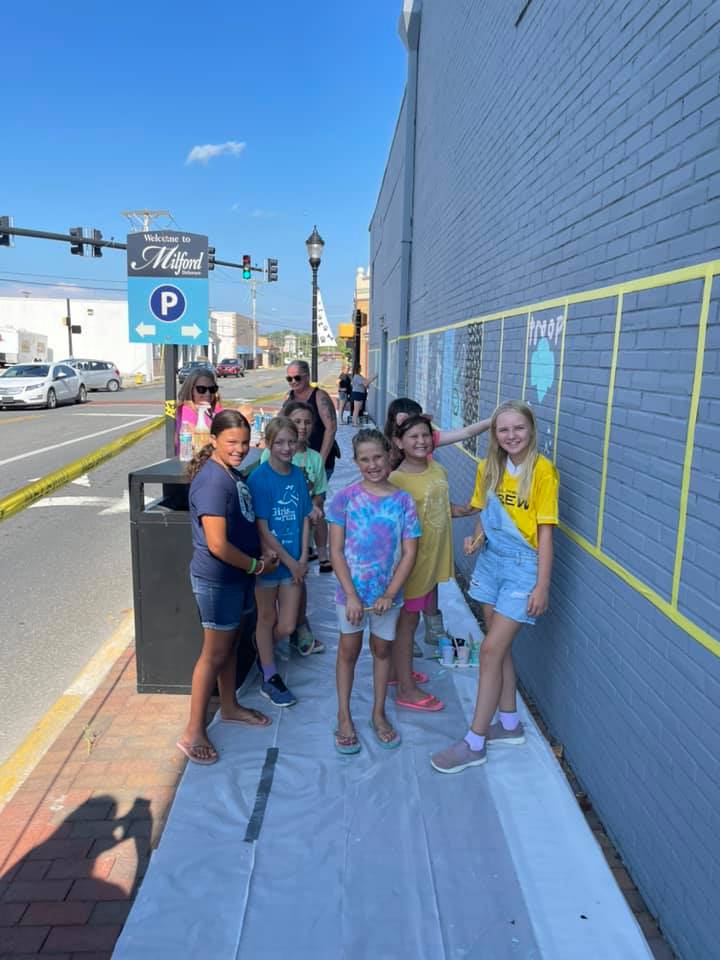 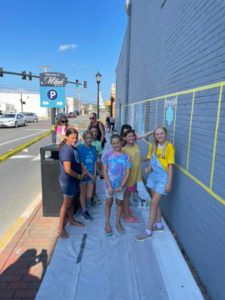 After purchasing Penney Square in December, Marissa King and her husband, Zach, have worked tirelessly to give the historic building an interior and exterior facelift. Considerable work has been done on the façade of the building which stands on one of the busiest corners in downtown Milford. The upgrades included new stucco on the front of the building as well as new paint on the entire exterior. Over the past few weeks, however, the side of the building has been the site of an art project that has given the brick building a cheerful new look.

“I decided to do the project because I wanted to show how strong of a community we have,” King said. “This display is on the largest building on the main street of our town, how cool is that? After an issue I had on Third Thursday, I saw the community rally behind me and it was humbling, so this was my way of saying thank you for the support and letting them know how grateful we are to be here and be a part of it.”

King explained that she and her husband had been discussing what to do with the large brick wall that faced Northeast Front Street and decided on a project called “Paint the City.” They initially planned to outline 3×6-foot rectangles and allow businesses, families and individuals to put their “mark” on the wall. Because of the overwhelming response, the size of the squares were lowered to 3×3-feet. The cost to paint a block was $50 and included all supplies. All proceeds after supplies were purchased were donated to USO Delaware.

“We ended up giving a lot of spaces away so we didn’t raise as much as we hoped, but we were able to provide a donation that will help military families,” King said. “There were about 80 blocks, so I would say maybe 200 to 250 people between those blocks provided the artwork. I get emails every day asking us to do more blocks, but I don’t want it to clash.” 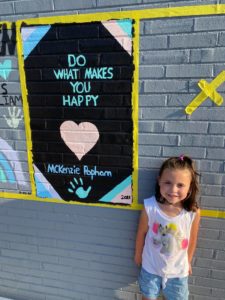 “McKenzie left her mark downtown in Milford,” Jodie and Andy Morris posted on social media, sharing a photo of their block with a heart and the words “Do What Makes You Happy.” “We used Mom’s quote that she said to me only a couple weeks before she became our heavenly angel. McKenzie added her hand print. It was a special project for sure. Thank you, Marissa King, for including our amazing community in this upbeat and positive project.”

Yanelle Powell also participated in the project, honoring her children and both of her grandfathers.

“Look, I did the best I could,” Powell commented. “Seriously, this was an honor to put both of my grandfather’s names on this wall as well as my children. The Fullman men in our family were very instrumental in the Vineyard Shipyard, building ships for both World Wars and luxury private yachts. Our legacy in Milford began in 1916, the year my great-grandmother was born. Soon after that, her father built our family home on Columbia Street where it stood for almost 100 years. They were able to live a decent life in times of peril and uncertainty and, because of this, I don’t have a choice but to continue to be great. Thank you, Marissa King, for your vision of this community wall.” 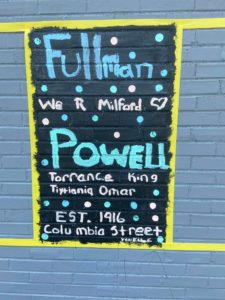 Yanelle Powell honored her grandfathers, children and ancestral home in her artwork as part of the project

King explained that she was very humbled by the outpouring of support for this project.

“This community is such an amazing thing to be part of and the Penney Square wall screams that,” King said. “I love driving by it, also. I just keep looking at all the blocks and it makes me feel so grateful, like we did that. But, I could not do it without each and every person that showed up, sweated their butts off and painted their blocks.”