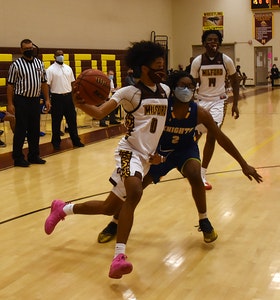 Coming into this season, the Milford boys’ basketball team knew it was going to be about learning what it takes to win at the high school level. This past week that education began, with a double-digit loss to Smyrna, followed by a crushing 58-57 defeat at the hands of Sussex Central. The game-winning three-point shot launched by Central junior Trent Fonville as the clock hit zero. Following an inbound play at the far end of the court with just 3.4 seconds remaining and Milford holding a 57-55 lead. It was a bitter way to lose a game, but it is also a lesson that a young team needs to learn. “When you play basketball long enough, things like what happened to us tonight are going to happen. It didn’t have to happen and that is on us,” Milford coach Lamar Shorts said.

As the game unfolded it looked as if Milford would gain its first win of the season, as defensive dominance along with control of both the offensive and defensive boards should have assured a Buccaneer victory. After ending the first quarter down 11-10, Milford began to put its foot on the gas and gain control of the game. Relying mostly on zone defense, while also mixing in some pressure, the Bucs would outscore the Golden Knight’s 16-5 in the second quarter. Rapidly converting turnovers into points and leaving Central searching for answers. The result would be a 26-16 Milford lead as the teams entered the halftime locker room. 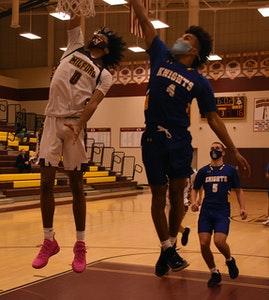 At the start of the third quarter, Milford would double its advantage to 32-16 early in the stanza. While it may have looked like the Buccaneers were in control, there was a storm brewing which Milford did not see coming. Following a timeout early in the quarter, Central suddenly looked like it had all the answers and Milford looked a little lost, mostly on the offensive end. The key factors that would lead to the Central victory would be twofold, being able to break the Milford press and making three-pointers like they were as easy as free throws.

By the time the dust had settled, the teams found themselves knotted at 38 entering the fourth quarter, with Milford decidedly on the ropes. “With Central hitting so many three-point shots, it was very difficult for us to stop them. We tried to extend the zone out, emphasize the importance of contesting the shots, but we just really didn’t apply the pressure we needed to. We’re a young team, so it’s a fine line when it comes to the defense we were trying to play, you can’t foul but at the same time you have to learn how to contest those shots,” Shorts said. 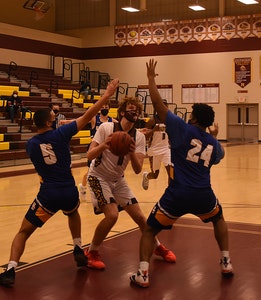 To the credit of the Buccaneers, they did not go away. The team regrouped and actually maintained a lead after the game was knotted at 40 with just over seven minutes remaining, Milford responded and seemed to have taken back control of the game 53-45 with 3:45 remaining. However, Central was not done. Once again three-point shots started to rain down from the sky and Milford was making a mistake young teams tend to make, it was not taking the air out of the ball. “Looking back at it, we really should have made more of an effort to slow down on the offensive end, that’s on me. It is something we really haven’t had much time to work on, but it is something we can fix. It’s hard to stop a less experienced player from running on the break or passing on a wide-open shot, it is really something I should have emphasized,” Shorts said.

In the end, it all culminated in a lesson that this young Milford team had to learn. Even though it played well enough to win, it didn’t. “We knew going into this season there were going to be things we had to learn. Well, we got a lesson tonight and even though we lost tonight we are going to be a better team for it. These guys have heart, and they will learn from this, that’s the positive you can take away from this game,” Shorts said.

The leading scorers for Milford were junior Jordan Norman (15) and sophomore Andrew Kravitz (14). Milford has started the season 0-2.