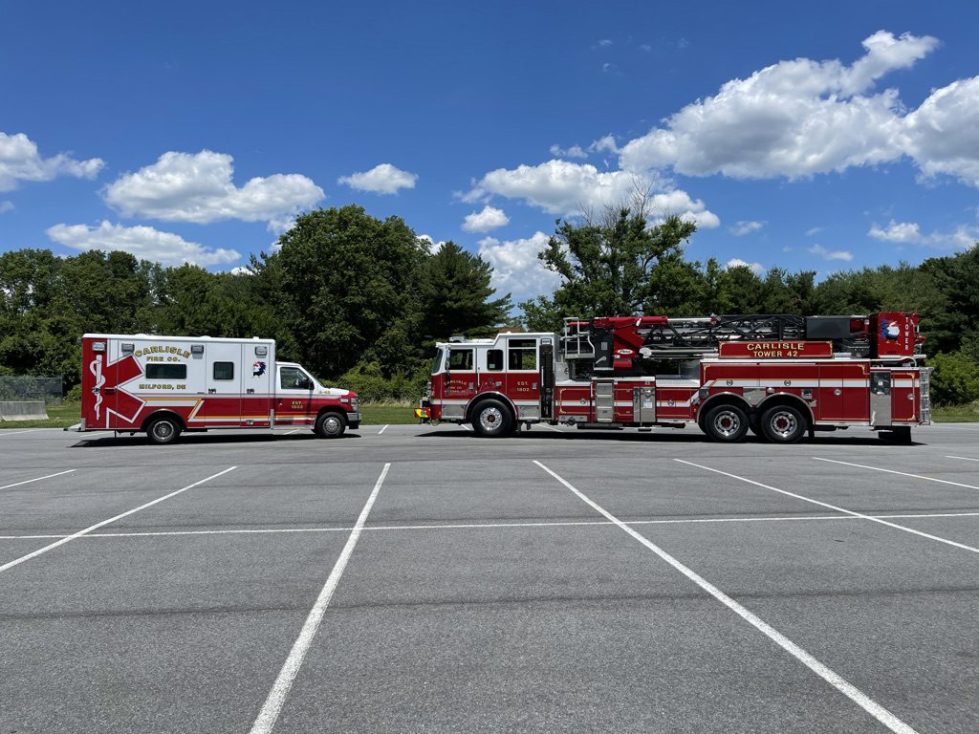 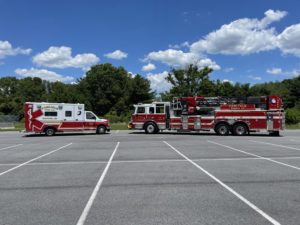 “In 2021, we responded to a total of 4,248 calls for assistance. 646 of those are fire, 3,602 were EMS responses,” Knowles said. “The department also supported several special service requests and public outreach events. In an effort to effectively appraise the operation of our company, we utilize a strategic planning technique called a SWOT analysis, to help identify our strengths, weaknesses, opportunities and threats related to our overall mission and the services we provide to our service area. Our strengths are our people, members with diverse backgrounds and experiences, continued community involvement, purchase and maintaining the state of the art apparatus and equipment. Our weaknesses are limited manpower, and increased training requirements. Our opportunities are expansion of EMS service, upgrade to equipment, utilization of new technology, planning for future growth and our threats are complacency, motivation, low recruitment rate, our retention rate and predictability of funding and continued development and annexation.”

Morris provided council told council that fire calls have remained pretty consistent over the past 21 years while the EMS calls have risen continuously upward. For comparison, Morris stated that the city saw a population increase of 42 percent from 2000 to 2010 while EMS calls during that time rose by 93 percent. From 2010 to 2021, the population of Milford increased by just over 30 percent while call volumes increased by 37 percent.

“When you look at that 21 year period overall, that equates to about a 72.5% population increase for the city and our EMS call volume increase of 130%,” Morris said. “Looking at last year’s data call volume for EMS of 3600 calls, that averages out over a year to about 9.8 calls per day, round that up to about 10 calls per day. Based on the current trends we’ve seen, looking out over the next 10 years based on growth that we foresee in the city, being conservative and factoring in a 50% increase in population, we would need to protect a city of about just shy of 19,000 about 18,726. That same percentage of 50% in our EMS call volume would take us up to 5,400 calls a year. Averaged out, that is about 14.8 or about 15 calls per day for EMS crews.”

Morris continued that funding from the city has remained pretty consistent at $140,000 per year over the past 21 years. For the next year, Carlisle is asking the city for $217,000 which would include the $35,000 in city utilities that Carlisle must pay. The remainder would be used for employee payroll and insurance. He acknowledged that comparing the increased amount to $140,000 seems to be a significant increase, but when looking at the 21-year average of increased calls at 130 percent and a funding increase of only about 55 percent, it seems less excessive.

“And when the city looks at that and council looks at that, we ask that you keep in mind that the continuous call volume, the continuous growth of the city has put quite a strain on our EMS crews. Our equipment, our apparatus we purchase continues to become more expensive. And in order to maintain our EMS crews and be competitive with other departments around us, salaries have to be a consideration for us, and we are getting to the point where we lose good employees by doing this by ourselves. So, we are asking for the city to take that into consideration and consider helping us out a little bit on the salary side with our employees.”

Councilman Andy Fulton asked what Carlisle was doing to have a county- or state-operated EMS system moved into the Milford area as the closest current station is eight minutes away. Morris stated that those decisions were at the county level.

“Yes it is. But I want to know what are you doing as Carlisle Fire Company to encourage the county to move a unit to our area so that our citizens here that you support with EMS can receive advanced life support as well?” Councilman Fulton said. “And that would help take some of the burden off, well it wouldn’t take the burden of the transport off. But the patient care burden would then come off of you a little bit by having the county resources moved into the area where the second largest population in Kent County resides.”

Morris acknowledged Fulton’s point and stated that the fire company has talked to Levy Court about reviewing call center data in order to justify an additional EMS unit in Milford. He pointed out that there was an EMS unit in Ellendale and another in Harrington. A new EMS station was recently added in Frederica. Councilman Fulton stated that he used to serve on the Harrington EMS staff and that was how he knew the eight minute response time. He also pointed out that with the growth in Sussex County, Harrington and Ellendale are being pulled further south more often, leaving Milford with less coverage. He wanted to know what steps Carlisle was taking because he felt that when fire companies get behind something, Kent County Levy Court tended to listen.

“We’ve been in some conversations with our Levi Court representative, Eric Buxton. And matter of fact, recently with COVID, that’s something we’ve had conversations with Medicaid, is it being staged here locally, just based on like you stated, our call volume,” Knowles said. “We have the room in our ambulance bay, where we can sustain a medic unit. So that’s something that we will have to have a continued conversation with. Levy Court, that’s something we certainly do. But I do agree. I believe we’re at a point where we need a medical unit, especially in city limits with our increased call volume. As I said, we’ve been in communication with our Levi Court commissioner Eric Buxon, he’s at our department a lot. However, there hasn’t been any continuous talks with having a unit in the station here in Milford, but I do agree. Due to the call volume, which obviously has increased with the city growth, it’s time for medic unit.”

Councilman Jason James commented that the volunteer rate with local fire companies was declining and expressed concern regarding response times to fires. He asked if the company had considered bringing on part-time paid firefighters to get the trucks on the road more quickly.

“So, it’s ironic that the question is asked. So what we’re actually doing is with our EMS crews that are obviously paid part time and full time, we put it out there in recent postings where we’re looking for firefighter/EMTs, but firefighters is not a requirement,” Knowles said. “However, the with the candidates that we’re getting, a majority of them are firefighter, firefighter qualified. So right now, especially in our early morning, late evenings, the fire engines are staffed with our ambulances to get out and what we do we put the ambulance employees on for to get out. And what we do, we put the ambulance on bypass during nighttime and the daytime we have two crews. So, one of them can go on bypass while they obviously are manning and staff the fire engine. Second group is available to serve the community.”

“Sometimes, I’ve gotten to watch and the response time from the time a fire alarm goes off until the first fireman gets there to the time the truck gets out,” Councilman James said. “Sometimes it’s not enough to man a truck, you know, so I hope there’s consideration being given to incentivize volunteers to man the trucks and get them out there to fight the fire.”

Knowles explained that this was not just a problem in the city of Milford but that it was statewide. He pointed out that the fire company had noticed delays in Houston, Ellendale and other local stations.

“But now, especially, during a time when it’s a warm or when there’s actual fire reported by dispatch, not only will Station 42 be dispatched, but 52 Houston and 75 Ellendale or 89 Slaughter Beach,” Knowles said. “So we’ll have somebody right away respond. But we’re at a critical point right now where there is a lack of volunteers and it’s tough. It’s really tough.  It is not like it was in the 90s where you’d have to bust butt to get to the fire station to get on. Now, we can basically take your time and you’re guaranteed to get on a truck. It’s unfortunate but councils help with our proposed funding request, that’s going to provide some incentives to get qualified more or less employees to man them engines so we can make a rapid response.”

Mayor Archie Campbell asked what the fire company planned to use the additional $77,000 for.

Councilman James asked if the fire company had considered compensation incentives to increase fire service assistance, again stating that response times were “dismal” and very “concerning for the life safety and property of the citizens of Milford.

“We’re relying on Carlisle Fire Company to be that agency for our citizens,” Councilman James said. “So, to the mayor’s point, you know, with the increase in funding could there be some consideration to say “hey, we understand EMS is a priority.”And taking Councilman Fulton’s comments on bidding for an EMS located in the city Milford, can there be some consideration for some of the increase should it be granted, and that’s up to the body of council, could that be considered to incentivize firefighters.”

Morris explained that there was no easy answer to that question. He stated that those decisions would have to be decided on by the entire body of the fire company.

“We have looked at on the fire side, the response times and the retention of members recruitment as well. That’s an ongoing campaign across state at the moment,” Morris said. “There are some things we’ve talked about in the past. We wholeheartedly agree that EMS right now, the call volume is just, it’s increasing beyond the point that we can no longer handle it. Based on the salaries and the funding we have, that we’ve been able to support over the last 20 some years. We are close to a breaking point and our priority right now based on what we see with our call volume, right now, the priority has to be EMS and providing that service to the city. We understand on the fire side that also is a service we provide. We are able to sustain that service at this time.”

Mayor Campbell pointed to the increased population in Milford and reminded the fire company representatives of the statistics they quoted at the opening of their presentation.

“We have to look at both avenues. EMS side and the fire side,” Mayor Campbell said. “Because here I am living in Milford and all of us sitting out here in the audience. The house catches on fire. One concern that I have, no offense, I’m not so concerned about the EMS ambulance going out to pick somebody up if my house is on fire. So, I’m going to be a little selfish.”

Knowles acknowledged Mayor Campbell’s concerns and stated they would continue to look at both sides of their service requirements. Councilman Brian Baer asked if there was a growing need for an additional fire station on the east side of the city due to rapid growth. Knowles stated that this had been a discussion in the fire service for the last several years. Councilman Dan Marabello commented that this made a good case for discussing the sprinkler systems in new construction.

The funding request from the fire company will be discussed at upcoming budget hearings in May.