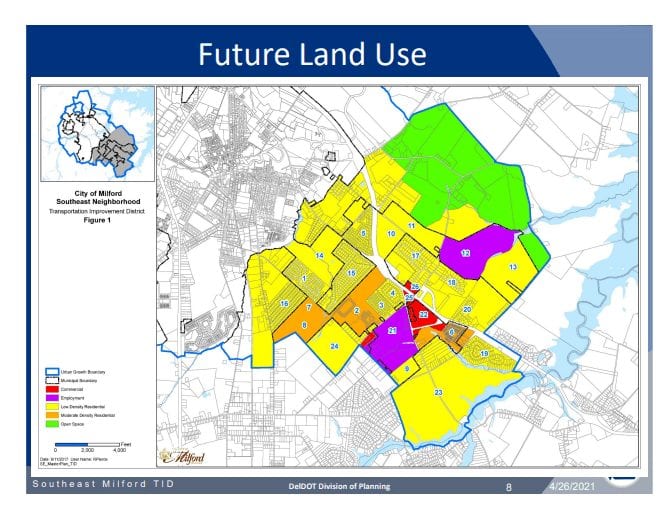 In March, the City of Milford entered into an agreement with DelDOT to review the area surrounding the new Bayhealth Sussex Campus and make suggestions on how to improve traffic flow. The Southeast Milford Transportation Improvement District (TID) was created using traffic studies, software and other tools to predict what traffic would look like up through 2045 if the area continued to be developed. On Apr. 26, Sarah Coakley, AICP, Principal Planner with DelDOT, presented preliminary data for City Council to review.

According to data compiled by DelDOT, there are more than 8,800 new residential units planned in the area by 2045 and 1.2 million square feet of new commercial building during that timeframe. This will increase morning peak hour trips to more than 7,800 and afternoon peak hour trips to more than 12,000 by 2045. The Bayhealth Sussex Campus alone accounts for 22 percent of the morning trips and 25 percent of the afternoon trips in that area. Most traffic enters the area from Coastal Highway, Route 1, using the Wilkins Road overpass.

Based on traffic and growth predictions, the TID made several recommendations. Coakley stated that the plan recommends seven roundabouts in the area. One at Cedar Beach Road and Sapp Road, one at Rehoboth Boulevard and Kirby Road, as well as one at Marshall Street and Elks Lodge Road. The other roundabouts are proposed for Pine Haven and Cedar Creek Road, Elks Lodge and Wilkins Road, North Old State Road and Johnson Road as well as Elks Lodge Road and Johnson Road.

“The plan also recommends a new traffic signal t Route 30 and Johnson Road and at the northbound ramp at Cedar Neck and Wilkins Road,” Coakley said. “Two turn lanes need ot be added to the entrance and exit ramp to the hospital and Rehoboth Avenue and Southeast Front Street need left turn lanes. There are also some recommendations for Route 1 which will be covered by the Corridor Capacity Preservation Program. A new signal at Argo’s Corner which will eventually be replaced by a grade-separated intersection. We propose a service road on the east side of Route 1 and suggest closing crossovers at Johnson Road and Sharp’s Road. These will not be part of the TID but will be funded by DelDot.”

The next steps will require City Council to agree with the TID so that DelDOT can develop conceptual plans and cost estimates. Coakley will return to council at a future meeting to discuss the TID in more detail with council.