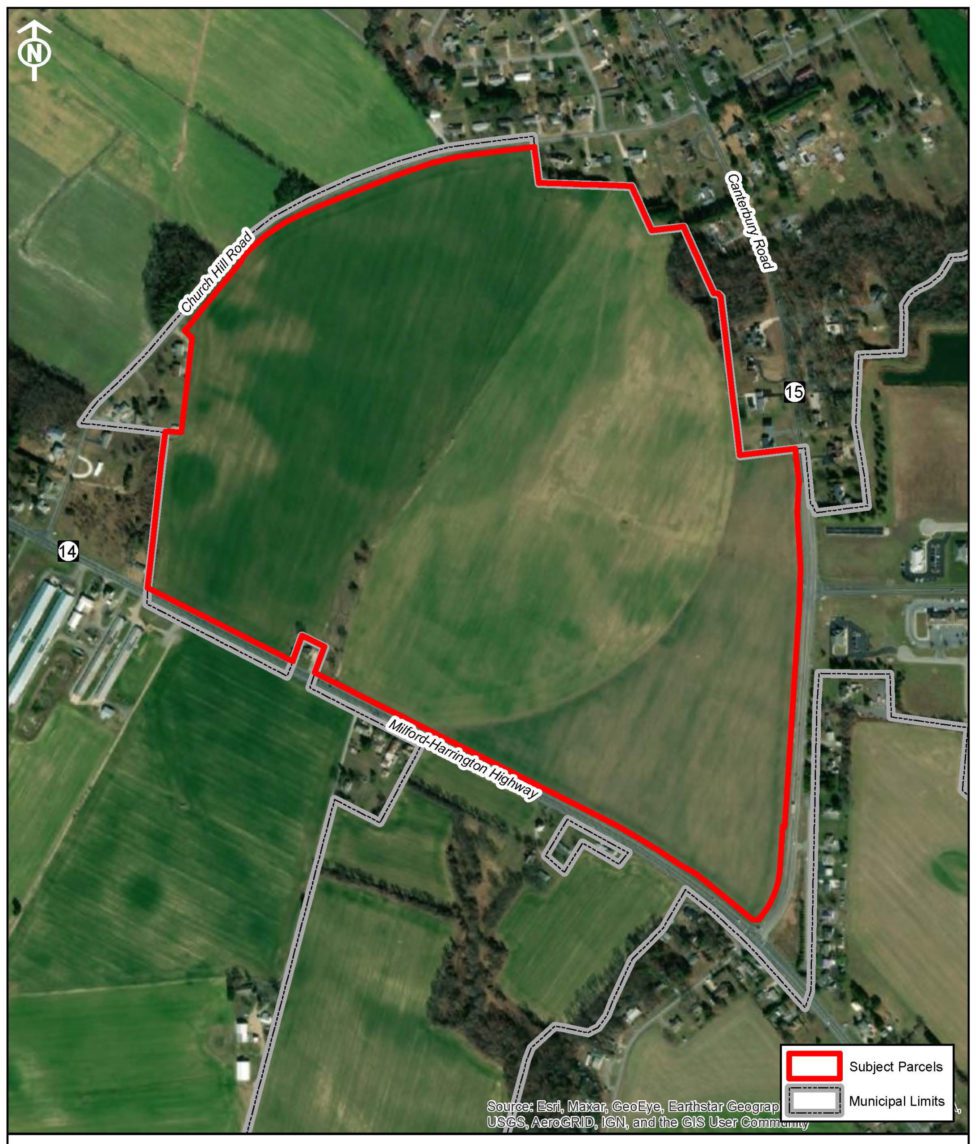 After two public hearings on Monday, September 27, Milford City Council voted to make changes to the comprehensive plan related to the R&C Fry Farm on the corner of Milford-Harrington Highway and Canterbury Road as well as to change zoning from R-3 Garden Apartment/Townhouse and C-3 Highway Commercial to I-1 Limited Industrial and B-P Business Park. Milford Planning Commission approved the request with a vote of five to zero.

“In full disclosure, the city does have this land under contract for purchase pending the change in zoning,” City Planner Rob Pierce said. “If the rezoning moves forward, there will be more hearings in the future for site plans and other issues. Just wanted to disclose the city has an interest in this and we are the applicants in this case.”

Pierce also read an email into the record from Judy Newstadt who lives adjacent to the property in question.

“Having owned and lived in my home for 45 years, I have grave concerns about the development of this property,” Newstadt wrote. “I understand the city needs to look at economic growth. While the benefits remain uncertain, the impacts of quality of life are imminent. I would urge council to study the impacts of this decision including light and sound pollution, flooding, paving, urban sprawl and more. I would ask that the city delay deciding on this as many people are still uncomfortable attending public meetings.”

Carl Hardman, whose property is also adjacent to the Fry farm stated that he only received notice of the hearing on September 10, only 12 days from the meeting although city code stated he should have received notice 15 days prior.

“I purchased my property in 1986 and moved into my home in 1987,” Hardman said. “I read in this notice that this property had been rezoned and annexed. I received no notice of any of these changes to this land. This is the first time I have ever been notified that this land had been changed at all. This letter reads like a will with all kinds of “whereas’s.” It also states that a public meeting was held on September 27, and you made a final decision. That is today, so your letter says you already made up your mind. I built my home and now you want to put an industrial park in my backyard.”

“I have serious concerns regarding this,” Donald Smith, another homeowner who lives near the property, said. “Existing roadways are stressed at various points during the day. While one could say we could build existing infrastructure, at what cost to property owners. Noise and light pollution are a problem with any industrial park.” Renee Smith who lives at the same address with Donald Smith agreed, stating that she did not want to stop development but that she did not feel it was fair that her property would now be surrounded by industrial parks.

Councilwoman Katrina Wilson pointed out that she had been on council for a very long time and that the Fry farm had come to them many, many times.

“What I think the first time it was high density residential, and I didn’t hear a whole lot about that as far as how that would affect the neighborhood,” Councilwoman Wilson said. “I was very excited to have this opportunity to have another business park, industrial park in the city of Milford. I support that because we try to listen to the residents of Milford and one of the things a lot of younger families are asking for is industry. They are asking us to create jobs and we are really working hard to do that. I want the people to know we do consider our residents and how they live and where they live and what is around them. But we have to consider the entire city as we make these decisions. I still believe this is something positive for the town.”

Councilman Todd Culotta agreed with Councilwoman Wilson, pointing out that Solicitor Rutt addressed the issue with the notice and that he did understand the traffic concerns.

“This was already slated for townhouses and apartments that are higher density and would be even more traffic than industrial,” Councilman Culotta said. “Yes, there is always a balance for where we can place these to impact residents, and it is something we all take very seriously. However, we have to look out for the growth of Milford and job creation and what it means to the lifeblood of this city. We cannot simply be a retirement community. We are the City of Milford and as a city we have different uses for lands. It is not like we are in the pocket of big developers and corporations, but we are looking at the economic growth of Milford.”

Councilman Dan Marabello explained that he understood the concerns of the residents near this property, suggesting that the city be sure to add buffers when the property is developed. Councilman Andy Fulton pointed out that when a site plan is developed, lighting and noise were taken into consideration.

“We require lighting designs no matter where we are,” Pierce said. “We require lighting be directed on the property. For example, there may be a hotel next to 24-hour gas station. You don’t want the gas station lights shining in the hotel. When we do site plans, we do control these types of things. Since the city would be the one developing the land, we have even more control than normal.”