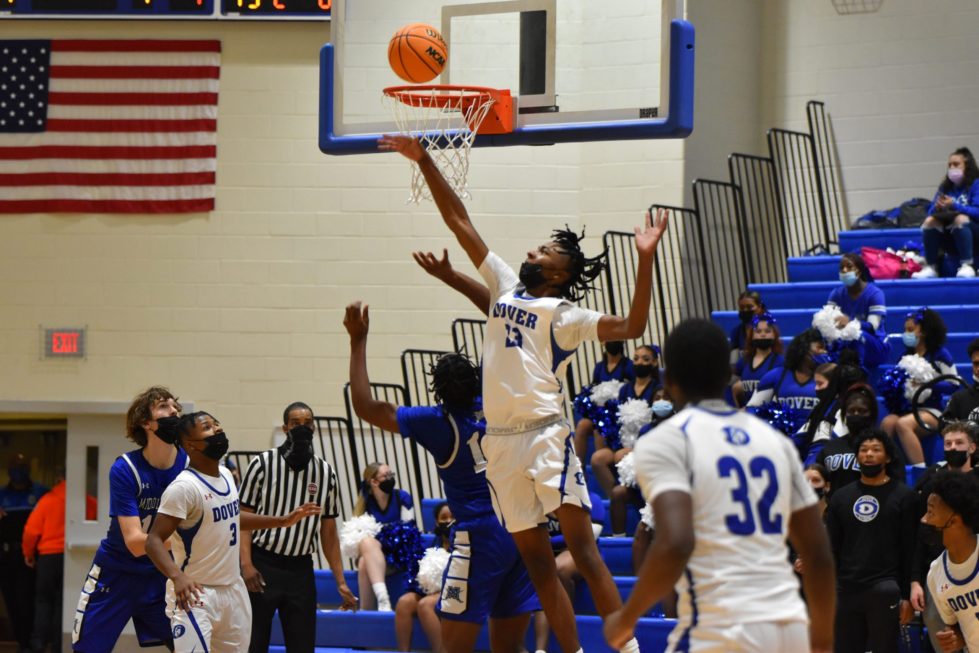 The Cavaliers dominated the opening 8:00 minutes, shooting at a torrid pace to take a 24-5 lead at the end of the 1st quarter. Junior forward Jaiden McGhee nailed his 1st two 3-point shots and finished with a game-high 20. Christion Simms, Jehiah Eldridge also drained long-range shots for the Cavs in the first half. Down by 19, Dover went on a 12-0 run to start the second period to get back in the game. Late in the half, Amir Hite made a spin move in the paint for a layup that cut Middletown’s lead to four and had the Dover gym rocking. The Senators were paced by Jaheim Harrell (7 points), Tyrone Tolson (6 points) and Hite (6 points) in the half, as they outscored the Cavaliers 18-5 in the 2nd quarter to head into the break down by 6.

The entire 2nd half was extremely competitive as neither team led by more than six points. Dover tied the game at 37-all with 2:18 left in the 3rd quarter fueled by the play on both ends of the floor by Kendall Abrams. He made 2 free throws, a “foul-line” jumper and a baseline layup plus he collected a defensive rebound in that 3:00 stretch. Middletown responded as McGhee made a corner “trey” (his 4th of the night) and the Cavs held on to a 44-41 advantage after the third quarter.

Dover’s Abrams opened the final period by following his own miss, getting two offensive boards before hitting a shot off the glass while drawing a foul and completed the traditional 3-point play with a foul shot to tie the game at 41-41. Moments later, Dover forced a turnover and Denim Perkins made a perfect outlet pass to Kenyon Scott who “kissed” the glass with a layup to give his team their 1st lead of the game at 46-44. That lead was short-lived as McGhee scored in the paint and Jaden Rogers converted both ends of a one-and-one opportunity with 5:41 to go.

The play over the next three minutes was dictated by both teams’ “hustling” defense, forcing several turnovers. With Middletown up 50-48, Tyrone Tolson made a long-range shot giving Dover the lead at 51-50. The next trip down the floor, Scott stole the ball near mid-court and laid it in to give the Senators their largest lead at 53-50 with 2:00 left. After Harrell drew a charge, Dover’s Hite hustled to save a loose ball on the other end, and from the floor, passed to Scott who made another layup and it was a 55-50 game with just over a minute to play. It was a game played at the foul line the rest of the way with both teams scoring 3 points each over the final minute.

When asked how his team came back from a 19-point deficit, Coach Stephen Wilson said, “I told the players, the game is not won-or-lost in the first half, the game is won in the second half. We dug down and played good team defense and executed at the end.”

Middletown’s Jaiden McGhee led all scorers with 20 points, while teammate Jaden Rogers added 11. The Senators balanced attack was paced by Harrell with 13, Tolson chipped in with 12, while Abrams and Scott each had 10 points. Dover improves to 2-0 and will travel to face Archbishop Ryan Sunday at 3:00. The Cavaliers next game will be their home opener Monday the 13th against Woodbridge