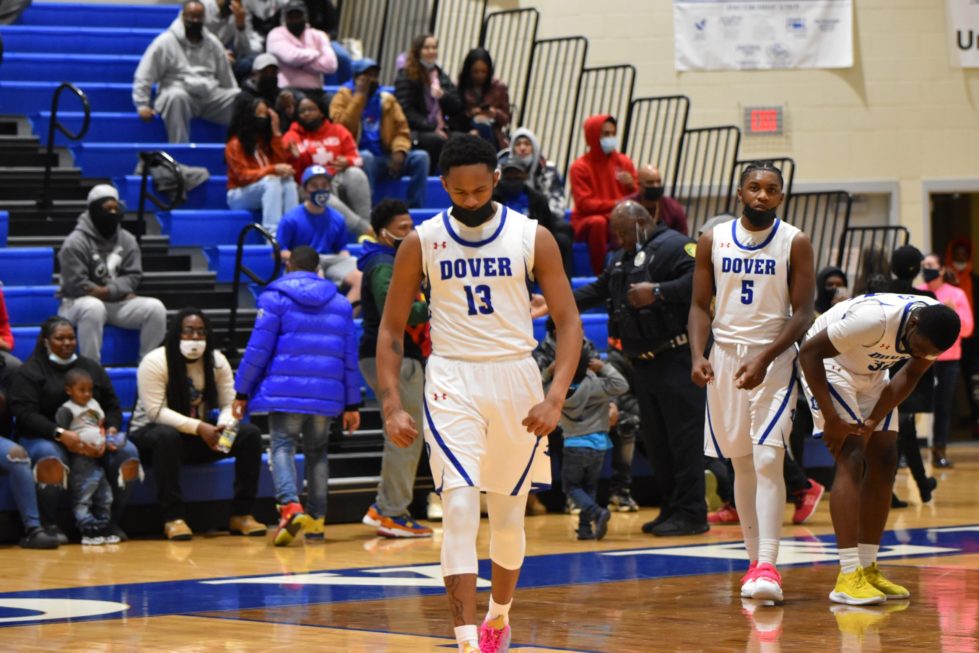 The 2nd ranked Dover Senators held a 21-16 lead at halftime over cross-town rival Caesar Rodney when “mild-mannered Clark Kent transformed into Superman ” in the person of Tyrone Tolson. Just like Superman changed in a phone booth, Tolson (who had not scored in the 1st half) came out of the locker room and scored on the Senators first four possessions with 4 points in the paint and two baskets beyond the arc, giving Dover a 15 point lead in the opening moments of the 3rd quarter. The visiting Riders could get no closer than 10 points the rest of the game in a 49-38 Dover win, their 6th straight.

Both teams struggled in the opening quarter as the defenses dominated and the Senators took awhile to figure out how to attack the Riders’ 6-8 center Messiah Antwi. The New Jersey transfer totalled 48 rebounds & 12 blocked shots in CR’s two previous games, both wins. The game was scoreless until the Riders scored a bucket with 4:00 left. Dover didn’t score until the 2:00 mark as the Riders took a 7-2 lead into the second period. Leading scorer Jaheim Harrell for Dover and Malachi Brinkley sat out a good portion of the first half with 3 fouls each.

The game was tied at 7-7 on a 3-point shot by Denim Perkins with 6:30 left in the half, but the Riders responded on a long range shot by Craig Williams to regain the lead 10-7. The Senators then dialed up pressure with a trapping defense that triggered a 10-0 run for a 17-12 advantage. Dover would take a 21-16 lead into the break.

That’s when Tolson came out on fire to start the 3rd quarter. Dover never let the Riders get any closer than 10 points on two occasions in the final quarter.

Dover received balanced scoring led by Harrell with 13, Tolson & Amir Hite both added 10 points. The Senators take a 6-game winning streak into Tuesday night’s game at Polytech. The Senators lead the Henlopen-North at 6-0 (8-1 overall), while the Riders at 3-3 (3-4 overall) had a 2-game win streak snapped and will take to the road all next week with games at Cape (Tuesday), Milford (Thursday) and Seaford (Saturday).

At halftime, Dover High honored members of the ’72 team on the 50th anniversary of their historic run to the state championship game. The Senators lost a heart-breaking one point loss to Wilmington High 57-56 on a buzzer-beater. It was the first championship game appearance in school history