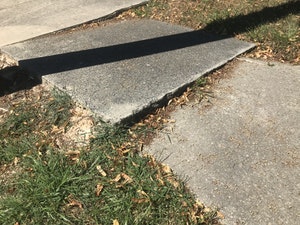 The City of Milford Finance Committee was provided a sidewalk update by Mike Svaby, Director of Public Works and James Puddicombe, City Engineer. According to Puddicombe, sidewalk inspections in Ward 1 have been completed and the city is moving forward with inspections in the other three wards.

“We have been responding to various complaints or issues throughout the city,” Puddicombe said. “We are also trying to work through the other three wards based on the funding we have available and what can be done this year. We do have a sidewalk project starting tomorrow that will connect Marvel Plaza to the Parks and Recreation Building. This was part of the SE 2nd Street project as an add-on because we came in very well under budget, but it took a while to get everything lined up with our contractor.”

Councilman Jason James asked that when the city had a scheduled ready that it be shared with council so that the information could be passed along to constituents.

“Constituents will ask us when a certain project will be completed,” Councilman James said. “This would be good information to have so that the public is aware what is happening.”

Puddicombe stated that the schedule was being transitioned somewhat.

“We were going to do each ward separately, but in Ward 1, we found much less work to be completed than we anticipated,” Puddicombe said. “This means we may not get as good a price from a contractor. Therefore, we decided it would be better to get inspection done on all three wards and come up with an amount that we can do both this year and next year. Part of the benefit is that everything is tracked in GIS, so our plan is to assign an anticipated start date to each point on the map so the public will be able to see when areas will be done.”

Councilman James expressed concern that if issues are addressed by ward in numerical order, Ward 4 would always be last.

“That is not acceptable,” Councilman James said. “It would be one thing if Ward 4 had fewer problems, but we don’t want to always go in number order and make Ward 4 last.”

Puddicombe explained that there was some work planned for Ward 4 that will begin very soon, including some street improvements and ADA ramps. He stated that the city is trying to get better at aligning these projects and, once they get started in the spring, there should be several projects starting in Ward 4. Councilman Brian Baer asked if the city was working with DelDOT to add sidewalks along Route 14 or Route 36.

“The general discussion has been that once we complete the bicycle master plan, we would sit down and review gaps in sidewalk networks so that they could be incorporated into the capital program. Once that is complete, money will need to be added to the general fund to fill those sidewalk gaps while there are already construction crews in place.”