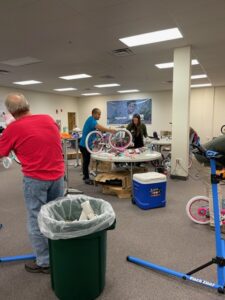 A suite in the Blue Hen Corporate Center was filled with boxes of unassembled bicycles and volunteers on Monday, January 16 as Bayhealth held the first Free Bikes 4 Kidz (FB4K) event in Delaware. The event was the vision of Dr. Tom Vaughan a retired radiologist at Bayhealth who has taken the role of Chief Wellness Officer for the organization.

“I am a bike advocate, and I became aware of this organization about a year ago and knew I wanted to bring it to Delaware,” Vaughan said. “As I gathered information, I learned that they usually partner with a healthcare organization because they want to have a connection to community health, things like getting kids out on bikes plus the availability of volunteers and warehouse space to repair, build or store bicycles. We partnered with Bayhealth who provided us the warehouse space, the marketing and, the hope in the future is we will start collecting used bikes.”

According to Vaughan, this event had volunteers putting together new bicycles donated by Kent Bicycle Company who gave them 277 bicycles for various age levels of children. Throughout the country, FB4K has given away more than 150,000 bicycles in 15 different cities. 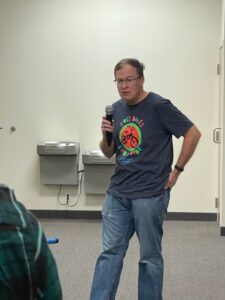 “Everyone remembers your first bike, that bike was my ticket to go explore the world,” Terry Esau, Executive Director of FB4K said in a video shown to the volunteers. “There are millions of kids in our country who do not have a first bike story. I think there are three ways that we impact our community. One, obviously, is the kids, having more active kids and reducing screen time. The next is the more than 35,000 volunteers who have worked with us since we started this thing. These are people coming from all sides of the aisle, coming together to do something. And, finally, we have kept 1,700 tons of metal and 130 tons of rubber out of landfills. We’re making a powerful impact on our world. I just want to make sure that when you ask someone “what was your first bike,” they have an answer for that. If you’re a kid out there in America, we see you and we got you.”

After showing the video of Esau, Vaughan showed one of a grandmother whose grandson had just received his first bicycle thanks to FB4K. 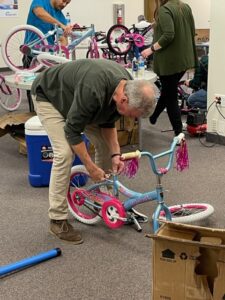 “I didn’t know what to expect, but when I pulled up and stood outside, everyone made us feel welcome,” the grandmother said. “When I got inside, I am like ‘Oh my, God!” I am so very humbled, and I thank you all for your time and effort. Just looking at the smile on his face is going to make me cry again. You don’t know what it means to me to see that smile on is face.”

Vaughan stated that there were more videos of grateful parents and grandparents whose children had just received a bicycle from the program, commenting that the videos were powerful and what made him realize that Delaware needed a chapter. He thanked the partners that made the initial event possible, including L&W Insurance, Mitten and Winters law firm, Bayhealth and more. He especially thanked the volunteers who were there putting bicycles together as well as the bike experts who were assisting them.

“We put an ad out on the Bayhealth intranet and had 60 people sign up,” Vaughan said. “We filled it up within a day and a half. You’ll get information on the giveaways which are likely going to be held this summer. We are also hoping to start collecting used bikes that we will repair and refurbish, and we hope to have more assembly events over the next few months.” 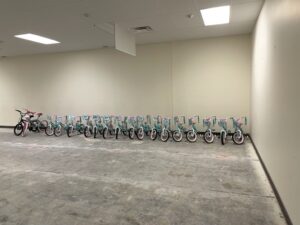 Vaughan explained that FB4K does not choose the children who will receive bicycles. They work with organizations like the Salvation Army, schools, public health, churches and other organizations who determine children who are in need of a bicycle. Currently, they know of 400 children who need bikes, and they expect to have over 1,000 children’s names within a month.

“I like to do things for the community,” Paul a volunteer and a student in the Graduate Education program at Bayhealth, said when asked why he chose to volunteer for the event. “I don’t know many around here that do stuff for children. I also work for a camp, so when it comes to kids and what they need, especially certain things I never had as a kid, I want to make sure others have that.”