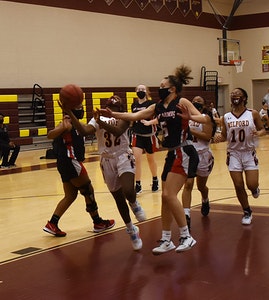 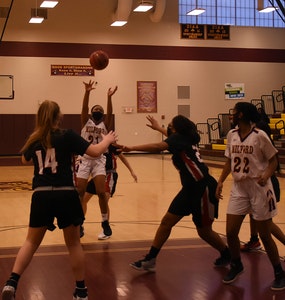 The deck has been stacked against them from the start, but don’t tell that to the Milford girls basketball team. Although they have yet to find the win column this season, that does not mean they are giving up. You need look no further than this past Friday evening as the Buccaneers battled back, only to come up short, falling to visiting Smyrna 33-30. While it was still a loss, it was a stark contrast to earlier in the season when Milford was outdone at Smyrna 55-21. “This was our best game of the season, we stayed in it and kept coming back for more. We are going to gain strength from this, that is what is great about it,” head coach Kevin Barkley stated.

Prior to the start of the season, Milford had three upperclassmen opt out due to health concerns. While the loss of the players created some issues, it also created opportunity. While Milford has not been devoid of leadership, with senior Haliegh Baker and junior Precyous Waters providing major roles in teaching the younger players and providing motivation. “Haliegh and Precyous have provided the majority of our offense and have been making the rest of the girls on the team better, we also have been getting a lot of help from the fact that the team refuses to give up. They know we are in a tough spot, but they have been keeping a very positive attitude,” said Barkley.

While the team’s progress has been slow, it has been consistent. With each game that passes the team has been steadily improving. One of the facets which Barkley has seen the most improvement has been the team’s shooting. “We have worked very hard on shooting; with each practice and each game you can see smarter decision making and shooting at a higher percentage. The players have been putting in the work and it shows, I really can’t ask for more than that.”

With the shooting coming around, Barkley has turned the team’s attention to ball control. It has been a consistent problem; which Milford needs to improve on. “There is no doubt we have had a problem getting the ball down the court. A lot of it has to do with players not having a lot of familiarity with each other. However, once again it is something that this group has been working on. They aren’t afraid to work and that is more than half the battle. While we aren’t where we want to be yet with regards to handling the ball, we will get there,” said Barkley.

Another area where Milford has been working on is the defensive side of the ball. While it has been consistent, it is still learning how to develop more cohesiveness. As the season has gone on, it is had to learn various ways to play as teams adjust to what the Buccaneers have been trying to do defensively. This has caused Milford to learn on the fly. “Like any young team, once they learn one thing, it is time to learn something else. The learning curve has been steep, but the team keeps working as hard as they can,” said Barkley.

Milford believes the best is yet to come for this team and Barkley believes it is just a matter of time before they find the win column. “What has amazed me about this team is how tough they are, they refuse to quit and give it all they have, every game, every practice. The one thing I know about this team is that they love the game, and they are a very close unit. It’s my job to harness those skills and make them the best players they can be. I get to see what they are all about, the record doesn’t indicate the work they have put in, but I know in my heart that these girls are winners,” Barkley concluded.