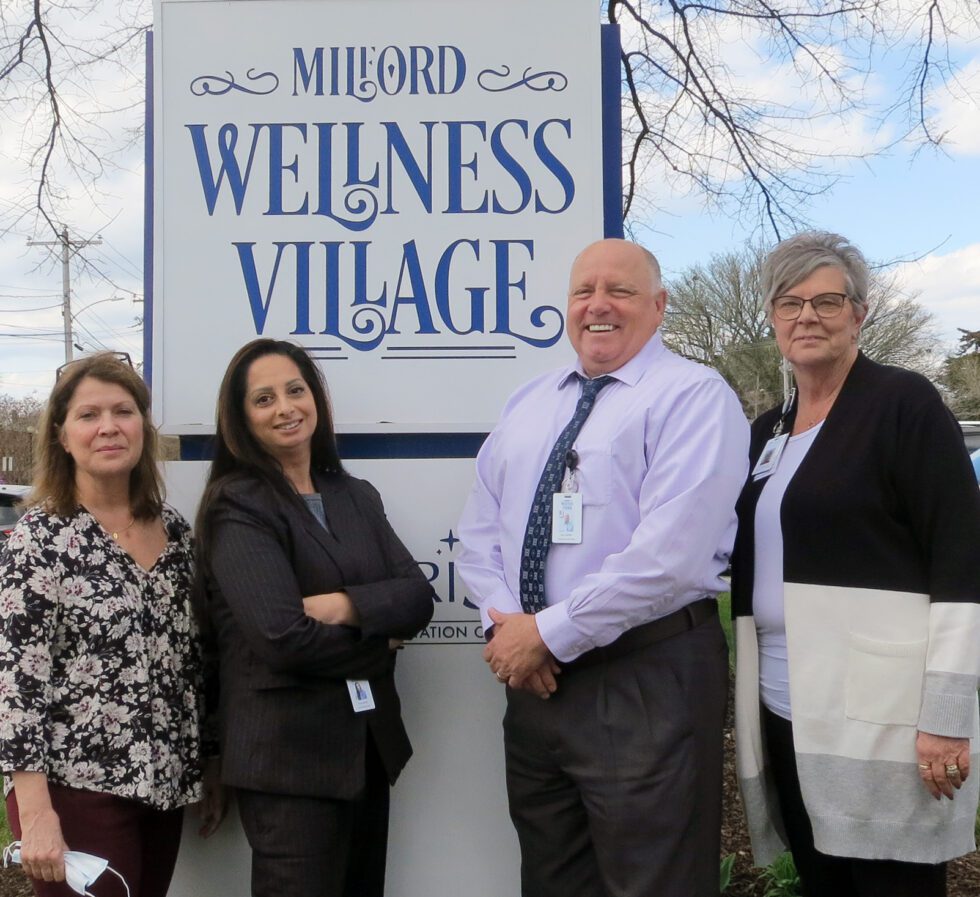 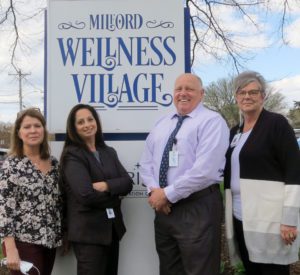 Lon Kieffer stands with other members of his leadership team

Lon Kieffer does not like to be called the “brains” behind Milford Wellness Village, giving that honor to Meir Gelley and his Chief Strategy Officer, Rabbi Halberstam, However, as the Executive Director of the organization, he knows that he is charged with assisting those who are housed within the old Milford Memorial Hospital.

“One of my personal beliefs is that if you are a leader in the caregiver industry, it is a lot like an expensive cheese at a cocktail party,” Kieffer said. “You take a bite of it and you think it is awful but then when it settles in, you realize it is actually good. It is not my responsibility to care for patients, but it is my responsibility to care for the people who care for them, whether it is a staff member or a family member.”

A self-professed Navy brat, Kieffer moved 13 times before he was 13 years old which he attributes with helping him fit into a variety of situations but never gave him a sense of belonging. Living in Baltimore as a young adult, he attended college and became a nurse when very few men were entering the profession.

“For many years, I made my living speaking and consulting,” Kieffer said. “I’m known as the defender of caregivers because I have the caregiver personality. I’ve made up a word called pro-per, which is professional and personal family caregivers. The two are emphasized because what I have seen in my profession is that there is a phenomenon about caregiver personalities. Those that enter that line of work enter it for one reason while family members do so for other reasons.”

Kieffer has seen in his own family how a natural selection occurs in families when it comes to who ends up being a caregiver for a parent or grandparent.

“You could have four or five siblings and one ends up being the caregiver, which I have seen in my own family,” Kieffer said. “We’re kind of a hierarchical family and even though my career has been as a caregiver, because we are a hierarchical family, my sister has been the caregiver in our family with my mother’s challenges. I found that my role is not to be a caregiver but to support my sister as she cares for my mom. That is really the kind of secret sauce that builds a culture that works. Using that method, I have been able to increase financial performance, decrease turnover, increase job satisfaction and it is because of this understanding.”

One thing that Kieffer has noticed over the years is that people are drawn to healthcare professions for many reasons, and he had to learn that he should not be pushing them out of the way or stealing some of their thunder. Instead, he learned he had to learn when to step back and give others praise. As the Executive Director, he is often quoted in the media and wishes he could put the spotlight on the people who are really providing the service. Keiffer’s father was an unstable manic depressive, but he still recalls his childhood fondly.

“I don’t know if moving so many times led me to my career choice, but I wanted my kids to grow up playing in streams and running in fields and having a rural life,” Kieffer said. “I moved to Seaford to be Vice-President at what was then Nanticoke Memorial Hospital in around 1993. Once they started school, I did not want my kids to have to move, but that ended up being kind of a trap for me. This resulted in me being in Delaware with my new bride and my grown kids elsewhere.”

Eventually, Keiffer tired of traveling for speaking engagements and returned to traditional leadership in healthcare. He started a YouTube Channel called “Defender of Caregivers,” where he tells life stories, using them as parables and allegories, to promote support of caregivers. A year and a half before he came to Milford Wellness Village, he was living in Seaford and working in Western Maryland, coming home on weekends and living with family during the week. He wanted a position in Delaware but was being selective in his job search.

“I was approached by a headhunter about the job at the Milford Wellness Village,” Kieffer said. “I was blown away but felt it was too early for the role they wanted me to fulfill. Over a year of continually talking, I found that it was just so compelling I had to come.”

Since arriving, more than 20 tenants have opened locations in the Milford Wellness Village, including Polaris, a long-term care facility, Spiritus, a ventilation unit that is part of Polaris, Banyon Treatment Centers, Nurses N’Kids, Kidz Ink and more. This means that Kieffer sometimes must act as a landlord as well as a caregiver support person.

“One thing I love about working at Milford Wellness Village is because our tenants meet the core mission of the village,” Kieffer said. “In healthcare right now, the biggest gap is one that you might not see and our goal is to try to fill those gaps as best we can.”